PCCC has a new location in town 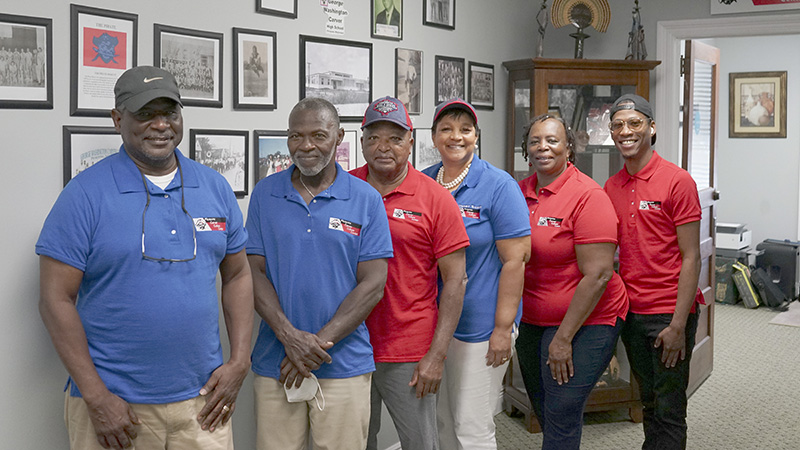 Picayune Carver Culture Center used to be housed in the Mississippi Mall, but the building was sold and the area where the museum housed was demolished, so PCCC relocated with new opportunities to provide opportunities for local youth of  and share the history of George Washington Carver High School.

Right before the pandemic hit, Picayune Carver Culture Center Board Member Tony Watts assisted Director Vinner Scott in revitalizing the Mississippi Mall location where PCCC was previously located. The location was facing a down turn, and Scott approached Watts for assistance in writing a grant to purchase the Mississippi Mall building. Scott told Watts she wanted to “rebirth” the place. Early in the pandemic, PCCC’s Board discovered the building was sold and demolished without their knowledge. Several PCCC artifacts from George Washington Carver High School were either lost during the demolition or during the sale of the building.

“All the money we put into that particular building was just gone,” said Scott.

“Nobody had told us,” said Watts. “So that’s how it started, it was devastating for a while, we just didn’t know what to do. But we bounced back.”

Even though PCCC didn’t have a building, they continued to offer activities within the program. Then, Scott and Watts came across a building located at 116 E Canal St. for rent. Scott, said that because Watts already applied for a grant for $20,000 and they were already hunting for a building things fell into place.

“It worked out perfect we got the building and then a ‘yes’ for the grant, and we were able to use the funds for furniture,” Scott said.

The $20,000 grant will also be used to support PCCC operations.

On Aug. 1, 2022 PCCC moved into the new location. Since then donors have provided pictures from various graduating classes at George Carver High School but PCCC still struggles to find remaining lost artifacts. One piece of history that has been received is a cash register once owned by David Snyder, who is the namesake for Snyder Park. Now in the new location,  PCCC implemented the Youth Improvement Program that covers history and culture on Mondays, provides tutoring on Tuesdays and Wednesdays, arts and crafts on Thursdays, and health and wellness on Fridays. PCCC will soon add a media center where young people can learn all aspects of podcasting. Also, Picayune Little League will start back up after being shut down due to COVID. Scott is open to partnering with other community centers and local volunteers. PCCC has lots of plans geared to bettering the community and its youth.

“If given the opportunity as young African Americans we can excel, we can do anything anybody else can do. That’s the kind of attitude we saw in the Carver culture,” said Board Chairman Leavern Guy.

Volunteers, teachers, coaches or all specialties looking to impact young people can contact Scott for partnership and/or volunteer opportunities.

Scott said the students are excited about the new location.

“They were super excited yesterday about finally being able to hear the history of the city of Picayune and to know that their grandparents and great-grandparents really had a history,” said Scott.

It will also be a safe place for young people to be themselves, learn, act as a safe haven and motivate them to excel.

Guy said the original intent of the PCCC Museum was to ensure the public remembers the culture of Carver High School and how it affected the African American community.

“It was encouraging the youth of that day to strive for some sort of excellency. The importance of keeping that going is what we saw a need for. We need to reconnect with that culture where the idea of excellence will always be there,” he said.

PCCC Vice Chairman Troy Foster was a member of the last graduating class of George Washington Carver High School. As such he wants to provide an avenue for student athletes to succeed. His main concern was the town’s major emphasis on kids participating in sports. He wants to change the community’s tunnel vision concerning a young person’s future only being in sports

“I was wondering, if all the emphasis is on the sports then why aren’t all the athletes going to D1 schools,” said Foster.

This led him to provide scholarships to students with the drive to be great in life, but may need extra guidance. He’s awarded an accumulated total of $11,000 in scholarship money to Picayune students so far.

Treasurer Melvin Hicks has a passion for students and helping adults. He was attracted to the program by PCCC’s purpose.

“I realized this community needed help, I was willing to give my time and my effort to make that happen and as a result, I’ve been here 20 something years. But it seems like a lifetime because of its growth,” said Hicks. “I’m always interested in giving back to somebody. I look at life this way, if I don’t share what I have, I’m going to take it with me, and nobody will benefit from it other than what I got out of it. I want to leave something behind.Eeverything I know I want to share it with somebody.”

Just like Hicks, Secretary Dominick Hart joined the program to move the community forward. As the youngest Board member, he said he is able to provide a different perspective on what the city needs. Hart’s goal is to pushed the community forward in all aspects of life, in everything from education to economics. He hopes to see more people in the community graduate from Picayune Memorial High School and college because there is a PCCC program that pushes them to succeed.

“A lot of kids are dropping out because they have no one to push them or have the encouragement, or it may be something going on in their household that’s not shared with other people but it’s a big damper on that child’s life. What we have in place now, there is help, there is hope, and I know that we’re going to move forward and I am excited,” said Hart.