No. 9 Pearl River shuts out Southwest for third straight win 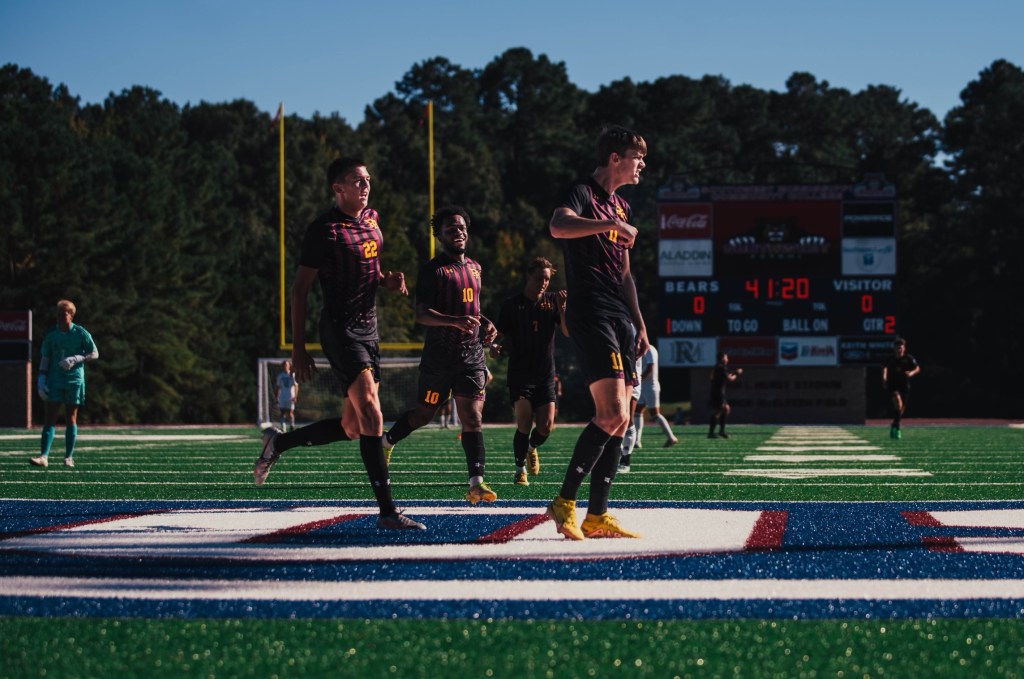 Alex Emery (Gulfport; West Harrison) celebrates after picking up his team-leading 10th goal of the season in a 2-0 victory over Southwest

The Pearl River men’s soccer team scored a pair of second-half goals and finished off its second shutout of the season Saturday in a 2-0 win over Southwest.

“I thought the boys played really hard,” head coach Drew Gallant said. “It’s always a hard-fought game when we play against them with my former players over there as coaches. (Assistant coaches) Diego (Figueroa) and Dylan (Picchi) did a good job of picking up on some of the things that Southwest was doing and we were able to make a few tactical changes.”

The Bears nearly broke the scoreless tie in the 30th minute of the evening. A shot attempt by SMCC was blocked by a Wildcat center back, deflected into the air, and caught by Maddux Francis (Poplarville) to end the threat.

Just a few minutes later, Francis came up big again. A free kick played into the box was headed forcefully by a Bear. Francis leaped and punched the ball over the top of the net for the save.

Brandon Elkins (Bay St. Louis; St. Stanislaus) rushed the ball up the field in the 37th minute. The outside back smashed a cross into the box but the SMCC keeper snatched it before a header attempt by the Wildcats.

Just four minutes into the second half of play, PRCC broke the scoreless tie. Christopher Dommer (Copenhagen, Denmark) moved near the box before sliding a pass to Alex Emery (Gulfport; West Harrison). Emery promptly knocked the ball into the back of the net to make the score 1-0. The goal was Emery’s 10th goal of the season and the assist from Dommer marked his eighth.

In the 59th minute, Dommer laced a shot from 23 yards out but the SMCC keeper dove and managed to get a hand on the ball, sending it out of play.

Dommer made his next shot attempt count. After dribbling his way into a one-on-one situation, the freshman slotted a ball home in the 67th minute. The goal made the score 2-0 and was Dommer’s eighth goal of the season.

Francis kept the shutout going in the 75th minute. Southwest had a great opportunity to cut the deficit in half but the PRCC goalkeeper fully extended to get a fingertip on the ball and send it out of bounds.

The Wildcats were able to run out the clock and hold on to the 2-0 victory.

After the match, Gallant named Francis the Man of the Match. The goalkeeper finished the contest with eight saves en route to the shutout.

“What an amazing performance from Maddux,” Gallant said. “It’s only our second shutout of the season so far. He made some great saves, but it was also good to see him make some good decisions on when to punch the ball and when to catch it. It was his best performance of the season today.”

Pearl River returns to PRCC Soccer Complex Tuesday for a matchup with Itawamba. The match is set to get underway at 7 p.m.