No. 10 Pearl River defeats No. 20 Copiah-Lincoln, advances to Region 23 Semifinals 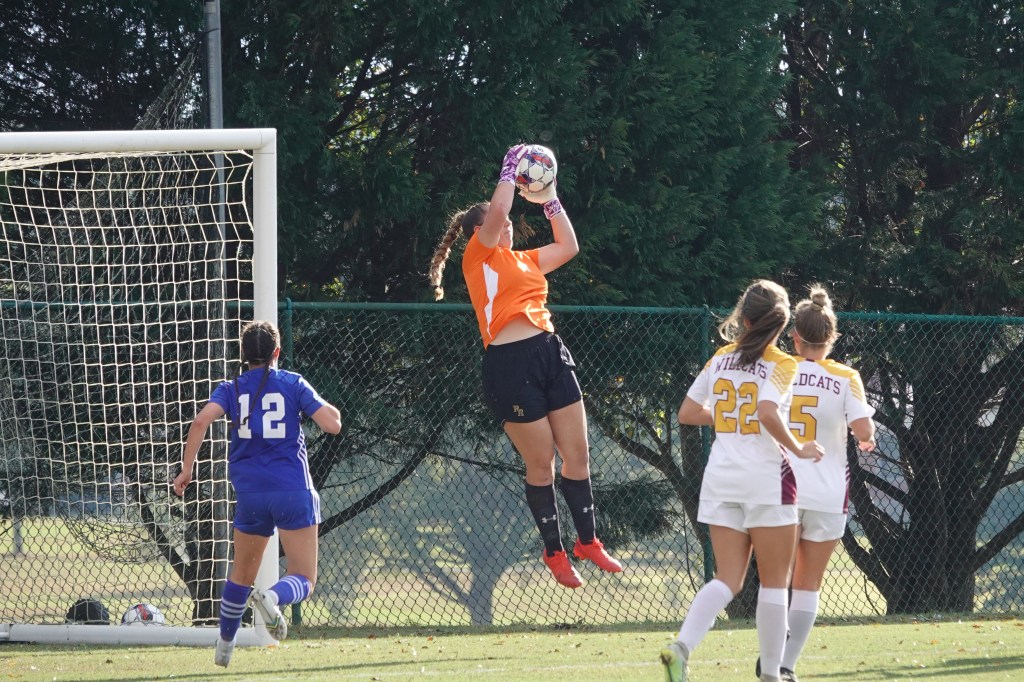 POPLARVILLE, Miss. — In the defensive battle that everyone expected, the No. 10 Pearl River women’s soccer team capitalized on a penalty kick to defeat No. 20 Copiah-Lincoln 1-0, advancing to the Region 23 Semifinals in the process.

“It’s nice to get the win and get back into the semifinals,” head coach Henrik Madsen said. “The girls worked hard. Copiah-Lincoln is very organized, so it’s difficult to break them down. Their goalkeeper had another incredible day.”

In the match, Julianah Overstreet (Vancleave) played her first minutes in goal since her senior year of high school. The sophomore is also a member of the Pearl River softball and volleyball teams, officially making her a three-sport athlete.

“It’s just awesome isn’t it? She was willing to come in and help us here at the end of the season,” Madsen said. “She’s a super athlete. She made a great, great save in the first half. She was the best goalkeeper in the state before she decided to play volleyball and softball, so it’s not a surprise that she played that well.”

Overstreet talked about her soccer appearance.

“I was nervous coming into the game, but I was able to talk to the girls and they calmed me down,” she said. “They gave me the confidence to go out and play. I was so excited when I got told that I was going to start today.”

In the 12th minute, Pearl River (14-1-2 overall) developed its first attacking chance of the game. Ann Maris Ragan(Flowood; Hartfield Academy) dribbled up the right side of the pitch before crossing into the box. Adele Mooney(Lafayette, La.; Ascension Episcopal) was able to get a boot on the ball, but her shot went out of bounds.

Just like the Wildcats’ last match against Copiah-Lincoln (10-4-3), the crossbar came into play for Jess Harrison(Gulfport; St. Patrick.). The sophomore received a pass on the left side of the box, cut to the outside, and smashed a shot toward the goal, but the ball smacked off the near post and was promptly cleared.

The 23rd minute saw the Wildcats develop another attacking chance. Sydney Spataro (Long Beach) saw an opening in the Wolves’ defense and went for the goal. A CLCC defender recovered quickly to block the shot. The ball rebounded out to Jenny Satcher (Hattiesburg), but her shot was also blocked.

Overstreet came up big for the Wildcats in the 33rd minute. The Wolves had a clear shot at the goal, but the three-sport athlete dove to her left to punch the ball out of play and keep the match scoreless.

PRCC finally took the lead in the 53rd minute. After being awarded a penalty kick, Laney Owen (Gulfport) confidently stepped up to the spot and drilled home the chance to take a 1-0 lead.

Copiah-Lincoln almost equalized in the 85th minute, but its shot attempt smacked off the crossbar. The Wildcats settled down after the chance and held on to claim the victory.

Pearl River returns to the pitch Friday against No. 3 Holmes as part of the Region 23 Tournament. Pearl River won the first meeting 3-2 in overtime. Kickoff at Jones College is set for 11 a.m. and the match will be livestreamed at JCBobcats.com/watch.

“It’s always hard to beat a team twice in a row, so we are going to give it our best shot,” Madsen said. “I know Holmes will make some adjustments, they’re well-coached. It should be another good battle.