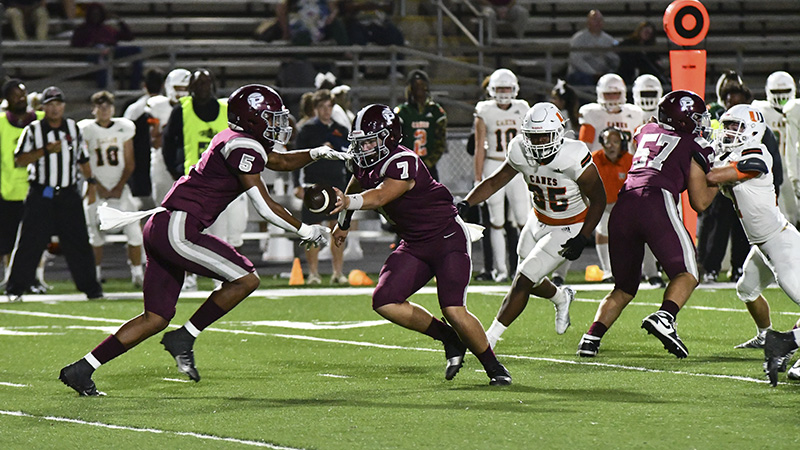 Brady Robertson hands the ball off to Niquis Ratcliff for a first down drive during Picayune's 55-0 win over the West Harrison Hurricanes. Photo by David Thornton Jr.

The Picayune Maroon Tide celebrated Homecoming night with the team’s first shut out game of the season when Picayune held the West Harrison Hurricane to zero points as they cruised their way to a 55-0 victory.

“It’s all about the week of preparation and being prepared for what the other team is doing. We always preach, alignment and assignment and just getting to the football with a bad attitude,” said Head Coach Cody Stogner.

Stogner said he felt the team could have had some shut outs earlier in the season but let go of them because of late touchdowns. Due to Friday’s performance, he was proud of his defense.

In the first quarter Picayune scored three touchdowns after West Harrison was clamped to a three and out to open the game.

Picayune scored out of the gate, thanks to Chris Davis 58-yard rush. Morgan Craft’s PAT was good for a 7-0 lead with just two minutes off the clock.

West Harrison went three and out again and Picayune’s second offensive possession ended in a touchdown through 15 plays covering 80 yards. That driver was capped off when Davis walked in a six yarder for his second touchdown of the game, giving the Maroon Tide a lead at 14-0 with fives minutes left.

Picayune’s third offensive possession was also Davis’s third touchdown rush. This drive covered three plays and included a play by quarterback Brady Robertson when he completed a 26-yard pitch to Broderick Ducre. In the following possession Darrel Smith rushed for 29 yards off a reverse. With the ball on the 12-yard line, Davis finished the job to put the Maroon Tide up 21-0.

In the second quarter the Maroon Tide scored another three touchdowns.

Early in the quarter West Harrison decided to go for it on fourth and five. With Davis as defensive back, he intercepted the Hurricanes pass and the Maroon Tide set up shop at mid field.

The Maroon Tide scored their fifth touchdown of the night in just four plays. Just as the Maroon Tide was pushed to third and 11, Darnell Smith ran a 61-yard touchdown. Picayune led 28-0 with 10:12 left before the break.

With West Harrison dealing with second and long, defensive end Jabari McWilliams put pressure on the quarterback, forcing him to throw a rainbow pass into Davis’ hand for his second interception of the night. Picayune set up shop on West Harrison’s 30-yard line and four plays later Niquis Ratcliff rushed for a 15-yard touchdown, giving Picayune a 35-7 lead with 7 minutes left until halftime.

Picayune’s next offensive possession resulted in a touchdown after the Maroon Tide drove the ball down 76 yards capped off by Davis’ fourth touchdown of the night. Picayune led 42-0 to end the half.

Picayune scored once in the third after opening the quarter with a seven-play 42-yard touchdown drive capped off with a five-yard rush from Ratcliff for his second touchdown of the night.

Picayune’s final touchdown occurred late fourth quarter when Smith concluded a 82 yard rush to the end-zone with just 2:30 left in the game.