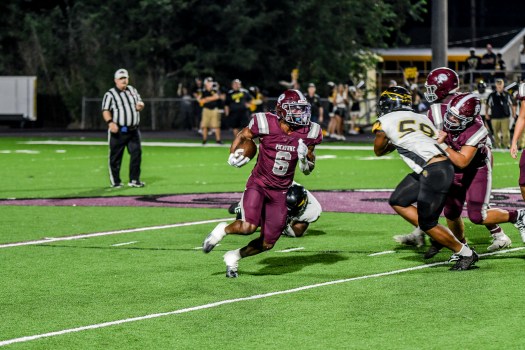 Chris Davis cuts up the field during Picayune’s win against D’Iberville. 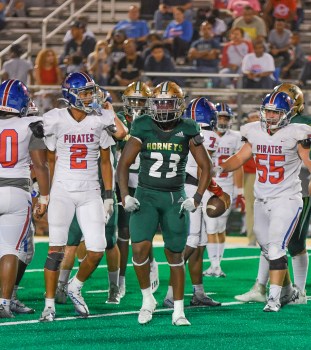 Nakiel Trotter fllexing after picking up a tackle for loss during Poplarville’s win over Pass Christian.

This week, several football players from Poplarville and Picayune have been selected to play in various all star-games in and outside the state of Mississippi.

In five games Warren has collected 144 receiving yards and 8 total tackles. He averages 1.6 tackles a game and 36 yards per catch.

In six games, Smith has collected 34 total tackles (19 solo) and has caused two fumbles. Smith averages 5.7 tackles per game. Trotter has made 51 tackles (28 solo) this season, with one interception. He averages 8.5 tackles per game. Edwards is a 6’2 290lb lineman who is an outstanding run and pass blocker.

The 2022 Bernard Blackwell North/South All-Star Football Game is scheduled for 11:30 a.m. on Saturday, Dec. 17 at Milner Stadium. The game will be livestreamed through FNUTL.com. It will also be available through the MAC Network, Roku, AppleTV & Firestick. Admission is $10 and tickets will be available at the gate on game day as well as through GoFan.

The Mississippi Association of Coaches & MHSAA released its 2022 Mississippi/Alabama All-Star Football nominees recently as well. This is an Alabama vs. Mississippi all-star game featuring the best gridiron players from both states. Maroon Tide senior defensive lineman Zavion Colman and senior running back Dante Dowdell were nominated for this game.

The 2022 Mississippi/Alabama All-Star Football Game will be played in Mobile, Ala. on Saturday, Dec. 10 at 12 noon at Hancock Whitney Stadium on the campus of the University of South Alabama. This game will also be livestreamed through FNUTL.com. It was also be available through the MAC Network, Roku, AppleTV & Firestick. Tickets will be available through GoFan.

In five games Davis has rushed for 382 yards for six touchdowns and has 534 all-purpose yards. He’s also made 13 total tackles (8 solo) this season. Waller has collected 54 total tackles this season (30 solo), has 4.5 sacks, with one forced fumble and one fumble recovered for a touchdown. He averages 9 tackles per game.