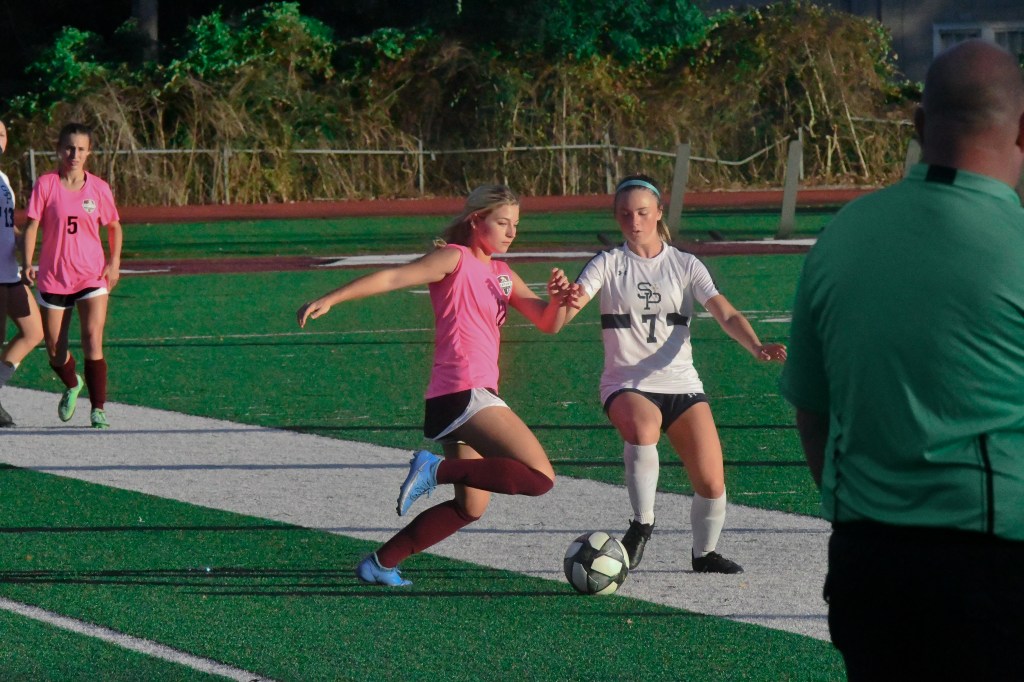 Kadie Craft controls the ball away from a St. Patrick defender during their 5-2 loss Wednesday night.

The Picayune Lady Maroon Tide soccer team fell 5-2 against the St. Patrick Fighting Irish this Wednesday night. Head Coach Edison Williams’ approach to the game was mainly for defensive to absorb the pressure and return it back with a counter.

“We know St. Patrick would be one of the tougher teams we’d play, we knew they were fast, knew they were good with the ball and they were going to move the ball and move us around. So we talked about keeping our shape, playing a mid block, sit in the middle, let them come to us and then try to pick the ball where we can get numbers around that ball,” he said.

That game plan went off course early once the Lady Maroon Tide got a first hand look at St. Patrick’s speed. It took a while for them to adjust and when they did scores came out of it.

St. Patrick opened the game with a goal in the 34:20 mark. St. Patrick had two other opportunities at a goal but missed. At this point Picayune got over St. Patrick’s speed and found their own rhythm. At the 13:15 mark Kadie Craft scored a close up goal with St. Patrick’s goalie out of position to tie the game at 1-1. Just two minutes later St. Patrick’s speed was on display again as they scored their second goal of the night off a 1v1 (attacker vs. goalie) shot. St. Patrick led 2-1 at the 11:45 mark.

St. Patrick missed two more shots at the goal before hitting another 1v1 during extra time.

After Picayune got their first goal, Williams was pleased because his team never quit and the players took ownership in their style no matter the outcome.

“One of our team values is we don’t break, we stay together, we don’t argue or bicker, we play the game and let the game come to us,” said Williams.

In the second half, St. Patrick scored first to lead 4-2. Picayune answered on the 15:10 mark with great execution. Williams described the goal as “beautiful counter soccer.”

Craft was the one who scored but it was effective passing that led to her goal.

“I can’t ask for any better soccer.” Williams said.

The goal narrowed the score to 4-2.

Until the 7-minute mark, goalie Gabi Barajas made two big saves. With than 7 minutes to play, St. Patrick put the icing on the cake, scoring a close up goal off a rebound shot.

To build off this loss, Williams said conditioning will be in the mix, but he also wants his players to gain confidence since they scored twice and didn’t quit against a tough opponent.