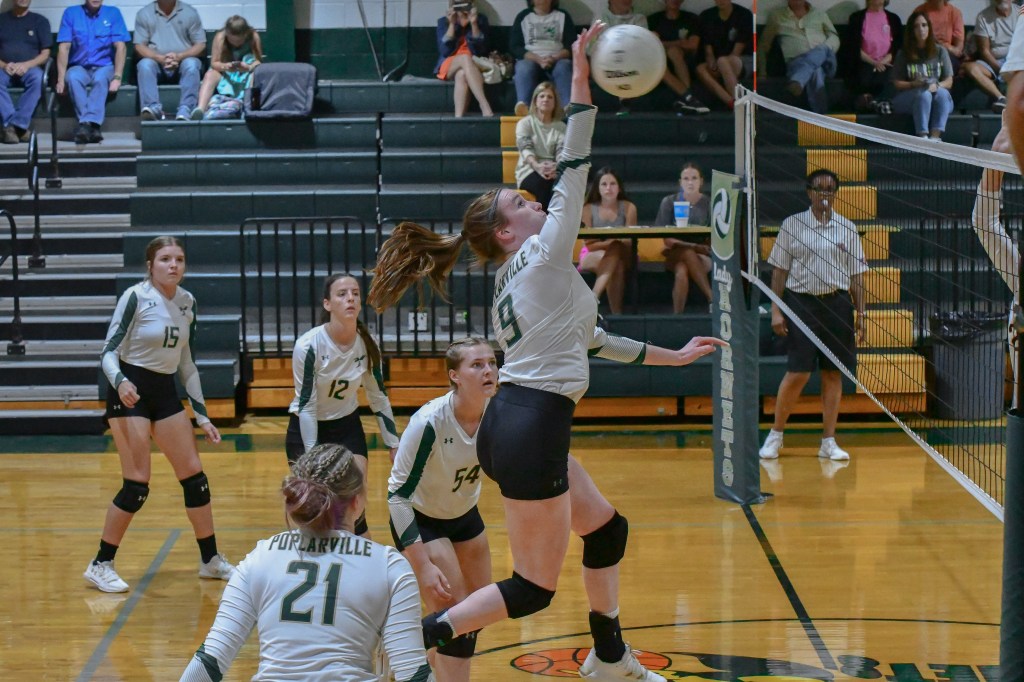 The Poplarville Lady Hornets volleyball team did not end their final game of the regular season in the way they’d like. After beating the Purvis Tornedos in the first set by two points, Poplarville dropped the following three due to powerful play making by Purvis.

The Hornets concluded their season 23-6 and 7-2 in district, so they will still move on to the playoffs.

The first set of the game was a back and forth battle, no team gained a real sizable lead over the other. There were long rallies and exciting effort plays on the Hornets end through the entire night.

The Lady Hornets took a 6-2 lead to open the game. Lendy Crider posted a kill, Sarah Bolin assisted Carli McCurdy for her kill and Lily Tynes served an ace for their lead. Purvis had their run and tied the game at 9-9. Things were tight from here on out. After some back and forth scoring, Poplarville ran with an 18-13 lead. What helped get them there were two Crider aces, a Tynes tip, and a McCurdy kill. Purvis capitalized on their opportunity when they controlled the ball and shrunk Poplarville’s lead to 19-17. A Rayelin Davis kill put her Lady Hornets up 24-19. Poplarville on their next two striking opportunities hit the net and another went out of bounds. Those missed queues made the score 24-22. Another Purvis point made it 24-23 but the proceeding rally had Purvis scrambling to set up a strike that never occurred. Their lack of communication resulted in a Poplarville point.

Both teams tied at 5-5, 11-11, 15-15 all the way up to 19-19. What kept the game close were back and forth kills, and hits made outside of bounds. Scores came to whichever team had executed there receive, set and strikes to perfection. If not the ball was either out, or blocked. Both teams were very disciplined in not allowing any easy points. Bolin’s assist to McCurdy tied the game at 19-19. From there Purvis grew a 23-21 lead. They made a serving error giving the Lady Hornets a point. Purvis responded by converting back-to-back kills to win the set.

This set was not pretty for the Lady Hornets. The Tornadoes blew past Poplarville early and obtained a 12-4 lead. Purvis was riding a hot streak and grew their lead to 20-10 behind a variety of kills and aces. Poplarville held the best they could with several aces a few kills but Purvis’s mistakes accounted for the majority of Poplarville’s points. Purvis ended the last two rallies with back-to-back kills.

Poplarville took a 4-0 behind Davis’ attacking block, and a Crider kill. The game got tied at 6-6 then at 9-9. Purvis took their first lead at 12-11. From there, Poplarville did not lead again. At 20-15 most of the following points came off balls being hit out of bounds. With Purvis leading 23-18, Poplarville committed an offensive error and then their attacking strike went out of bounds, giving Purvis the win.

Next, the Lady Hornets will play in their first playoff game in program history this Saturday, Oct. 8, 1 p.m. the will host the first round of the 4A state playoffs against the Lanier Bulldogs.