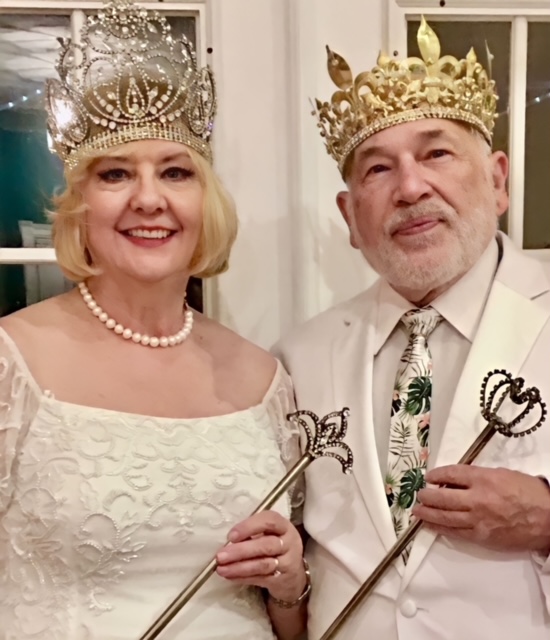 The Krewe of the Pearl recently crowned its new King and Queen for the 2022-2023 carnival season.

Curtis and Debbie Craig of Carriere will reign as the new royalty for the upcoming Carnival season.

The theme for 2023 is “Cruising the Caribbean.”

The crowning was held for members of past royalty, co-captains, family and friends, including the King’s and Queen’s court, at the Senior Center of South Pearl River County.

Members of the King and Queen’s court are Darren and Amithyst Kearney of Slidell, Rebecca and Scott Neal of Pearl River, Louisiana, Christine and Jeffery Kristeller of Charleston, SC, and North Attleboro, MA, ZyQuona and Kain Howard of Columbia, Tracy and Scott Williams of Biloxi,  Bonnie Hughes of Carriere, Sandy Lemoine of Picayune, Trina McClendon Schelton and Geri Lisotta, both of Carriere.

The Krewe ball will be held on January 28, 2023 at the Hide-A-Way Lake Lodge and the parade will be held in downtown Picayune on February 4, at 2 P.M.

The Krewe of the Pearl is Pearl River County’s only carnival organization. The Krewe is now taking new memberships for its 2022-2023 season.

The membership dues of $200 per couple/two persons include admission to the banquet and ball, places on the Krewe float in the parade, as well as social events throughout the year. Members’ children  are also welcome to ride in the parade.   Businesses and organizations can enter a float, car, truck or marching group in the parade.

Those interested in joining can  visit the “ Krewe of the Pearl” Facebook page and print out membership and parade entry forms.

or stop by Pigott AllState on Highway 43 North to pick up a form.