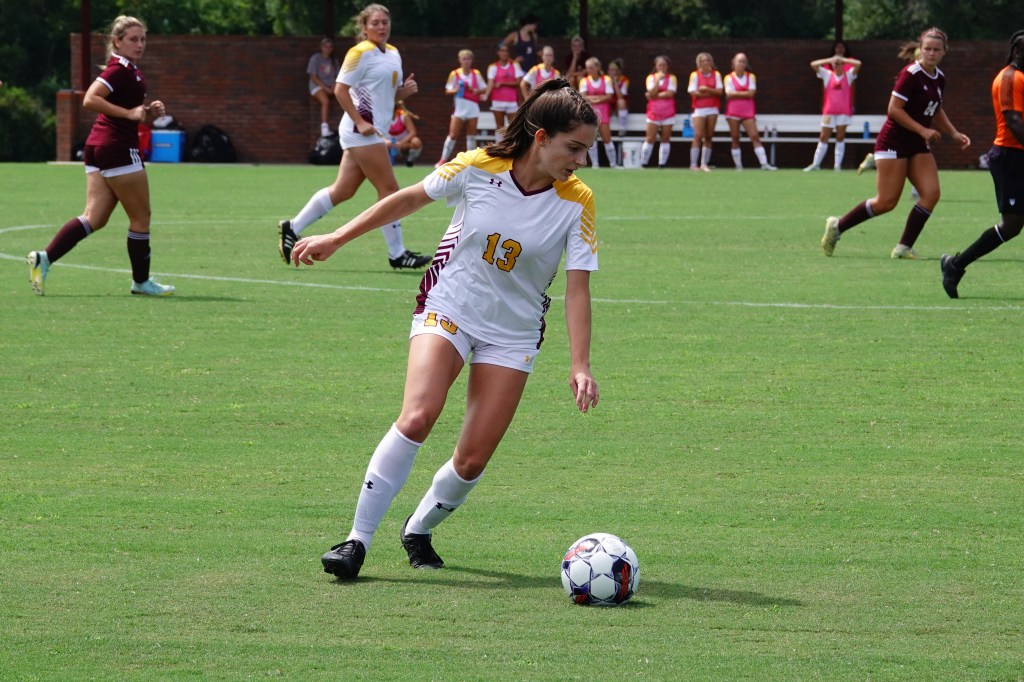 The two goals for Satcher were the first of her Wildcat career. The midfielder was forced to miss both the Spring and Fall 2021 seasons due to an injury and recovery.

“Jenny with two goals was awesome,” Pearl River coach Henrik Madsen said. “It was good to see, especially with the adversity she has dealt with. She had an opportunity to add a third one, but the whistle was blown after she had kicked the ball. I was proud of her performance today.”

Despite grabbing the win, Madsen felt that his team left some opportunities on the pitch.

“I don’t feel like we played as well as we could have,” he said. “We will take the win, obviously. It’s always good to get a shutout. Southwest was organized so they posed some threats and our backline dealt with it just fine.”

Early in the match, Pearl River (8-1-1 overall; 3-1-1 MACCC) nearly picked up the lead thanks to Bre Stansberry (Lucedale; George County). The sophomore winger squared up on a ball and fired it towards the net but the Southwest (3-6; 1-3) keeper stepped to her left and caught it to end the threat.

The Wildcats fought to take the lead in the 18th minute of the night as Satcher picked up her first goal in the maroon-and-gold. The midfielder worked her way into a one-on-one opportunity with the Bear goalkeeper before knocking home the ball to give PRCC the 1-0 lead.

It only took seven more minutes for Satcher to strike once again. This time, the sophomore worked her way down the right side of the pitch before unleashing a shot from over 20 yards out. Southwest’s keeper dove to her right and got a hand on the ball, but there was too much power behind the shot as it slammed into the top right of the goal. Satcher’s second career goal gave PRCC a 2-0 advantage.

Pearl River added a third goal of the night in the 62nd minute. Southern Miss transfer Lauren Bennett (Long Beach) tracked down a ball that was sent into the box off a corner kick and laced it into the back of the net.

Adele Mooney (Lafayette, La.; Ascension Episcopal) had a chance to add to the lead in the 72nd minute but her header attempt didn’t have enough power and was easily scooped up by the SMCC goalkeeper.

With under a minute left in the match, it looked as if Satcher had secured the hat-trick but the referee blew the whistle calling the play dead right as she took the shot. Satcher fired another shot attempt as time was about to expire but it was saved and the game ended in a 3-0 PRCC victory.

Pearl River returns home Tuesday for a matchup with Itawamba. Kickoff at PRCC Soccer Complex is set for 5 p.m.