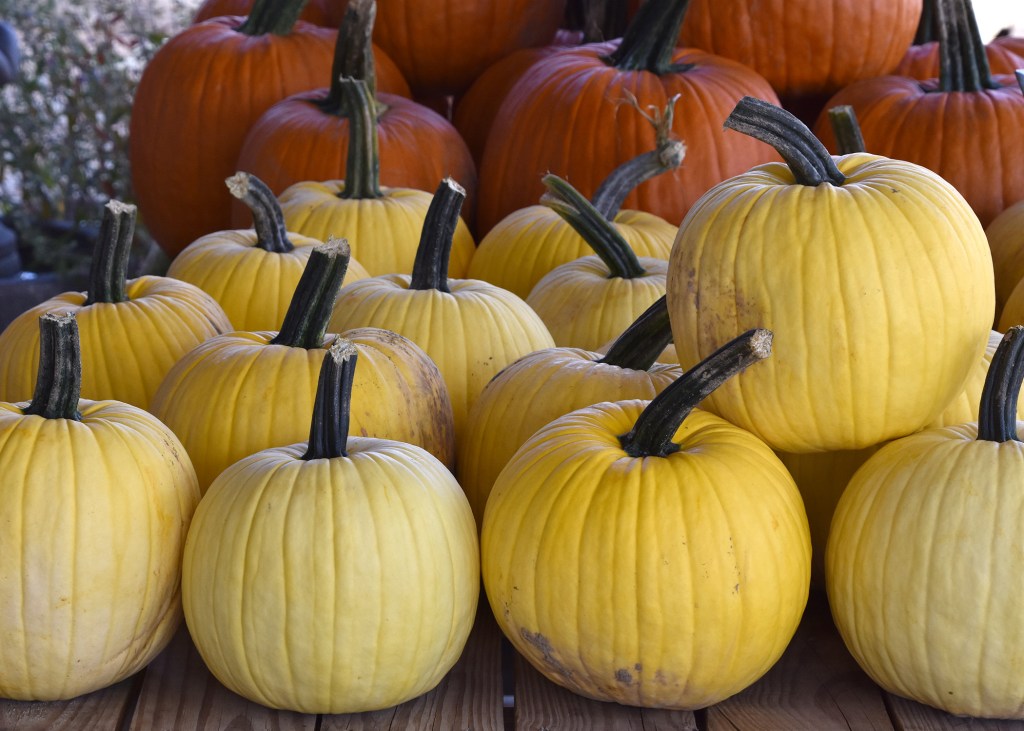 YELLOW -- The different varieties of pumpkins are primarily grown for eating, decorating or for size. (Photo by MSU Extension/Gary Bachman) Alt text -- Rows of yellow pumpkins and orange pumpkins.

As we move further into the fall season, I wonder if there is a more fitting and fun fruit than a pumpkin?

Pumpkins have become a major part of any autumnal or Halloween decoration. And who can resist a fresh pumpkin pie? I know I can’t!

The standard pumpkin color for fall decorating has always been brilliant orange. But why limit yourself to just orange? Pumpkin colors include bright and bold red, yellow, white, blue and multicolored stripes. I’m even seeing bright-yellow pumpkins this year.

They can be miniature, flattened, necked, smooth, winged and warty. More and more independent garden centers are offering a wide array of decorative pumpkins (and gourds) for autumnal displays.

Besides their aesthetic qualities, there are some interesting facts about pumpkins you may not know.

While there are more than 150 different pumpkin species grown around the world, there primarily are only four species grown for autumn display. These four species have a multitude of selections, according to the University of Illinois Extension, which is my go-to source for pumpkin information.

First are Cucurbita moschata pumpkins, which are generally weight 5 to 10 pounds and often grown for processing. I’ll talk more about canned pumpkin in a bit.

The Cucurbita mixta species shows tolerance for growing in the Southeast, which is good news for growers and pie bakers in Mississippi.

Cucurbita pepo pumpkins are used for carving scary faces and decorating. This species also includes summer squash and zucchini. Have you ever thought of carving that huge zucchini that didn’t get picked in time?

Last is Cucurbita maxima, which includes pumpkins grown for size like the ones entered in giant pumpkin contests.

The top six pumpkin-producing states are Illinois, Michigan, New York, Pennsylvania and California, each of which have at least 90,000 acres in production, according to the Ag Marketing Resource Center. There are many small, specialty pumpkin growers in most states.

Processing pumpkins are tough and aren’t picked by hand. Most growers use mechanical harvesters resembling bulldozers that quickly move through the production fields pushing the pumpkins.

In Morton, Illinois, the self-proclaimed Pumpkin Capital of the World, there is an event called Pumpkin Chuckin’, where various catapults and cannons shoot 10-pound pumpkins for distance. To me, most amazing was the Aludium Q36 Pumpkin Modulator air cannon that can shoot a pumpkin up to a mile.

Canned pumpkin is an essential ingredient for making any pumpkin pastry, including pumpkin pie. But unless the can says 100% pumpkin, it’s likely a mixture of various pumpkin-like squash that have shorter fibers than many pumpkins, resulting in a smoother product.

After carving your scary jack-o-lantern, save and thoroughly wash away the stringy tissue from the seeds. It doesn’t matter the type of pumpkin you use, as the seeds of all pumpkins are edible.

Toss the cleaned seeds with melted real butter — this recipe does not work with any make-believe butter substitutes — sprinkle with sea salt and bake at 300 degrees. Keep a close watch until the seeds are slightly toasty in color.

It will be hard to do this, but let the seeds cool before you enjoy them.