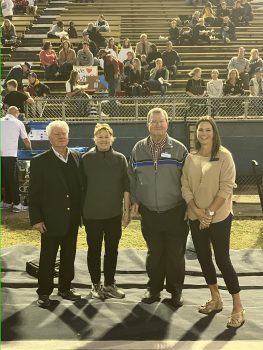 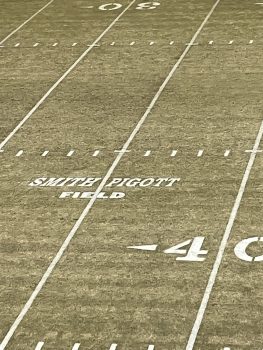 Picayune native Bud Pigott, a 21-year former defensive coordinator at Foley High School in Foley, Alabama, was honored when he and another long time coach had a field named after them.

On Oct. 21, former Head Coach Lester Smith, 78, and Pigott, 80, were recognized when the field of Foley’s Ivan Jones Stadium was named the Lester Smith and Bud Pigott Field during a ceremony held before that home game. Smith is the all-time leader in wins at the school (127) followed by Lester Smith’s former coach, Ivan Jones, who passed away last year at the age of 94. Jones had 108 wins.

“It was great honor,” said Pigott.

Pigot and Smith embody a spirit of winning, respect, building a legacy of class and sportsmanship with fierce loyalty among their players. Their names being immortalized in the namesake of the field was said to be overdue amongst the Foley community.

Pigott is a 1960’s Picayune Memorial High School graduate, playing all four years of Maroon Tide football as a tight end and defensive end. Pigott grew up just east of Picayune in the Salem community on a small farm. Football was something he was always around, whether he was playing catch or touch football as a kid with his cousins after church or during recess.

“Of course you played both ways back in those days, there was no platooning,” said Pigott.

After college, he knew coaching would be the next destination. In 1966 Pigott had his first coaching job in Niceville, Florida. He coached there for two seasons then was asked by then Head Coach Ivan Jones to come to Foley Alabama to be his assistant. Two years later, Lester Smith became head coach in 1969 and Pigott moved to defensive coordinator under him for a 17 year run. Foley’s football career included an 84-20 record from 1974-83 and in 17 years as defensive coordinator Pigott’s defense gave up an average of only 10.5 points per game. Pigott’s last game as coach was in 1985.

Amongst Smith’s and Pigott’s players and coaches, the two were the perfect coaching team. Smith and Pigott gave rise to loyalty and stoked a fierce desire to succeed alongside their players. Each player who came through the Foley program was taught the fundamentals.

“Whatever you set your mind to do you can do it if you really apply yourself,” said Pigott. “Extend yourself, be as good as you can, learn how to be a part because the world doesn’t rotate around you but you have a significant part to play and you’re important to the team and the team is important to you,” said Pigott.

Pigott and Smith pushed players to develop confidence and understand that no matter where a former player goes, they will be a part of something, a team, community, or family.

Outside of football Pigott married Claudia Stockstill in 1964, who also graduated from PMHS in 1963, and was the head majorette for the band. Pigott and his wife had two kids, a son Rusty, now 57 and a daughter Rickey, now 54. Rusty played two seasons under his father at Foley. They lived no more than 150 feet from the stadium so he grew up going to Foley football games before he attended the school.

“When I’d get out of school I was the ball boy, and I’d stay for all of the practices all the way up until I started playing. So it was neat to be around coach Smith and daddy for all the film watching, and practicing and just seeing how they did things. When I got to come on and play it was almost like I finally got to do what I’ve been seeing all these yours so it was quite enjoyable,” said Rusty.

Rusty said the impact Pigott and Smith had on players was universal and resulted in them earning each player’s respect.

“Respect, the appreciation for the character, the discipline and the positive influence they had on somebody. I was quite fortunate. They just got to see that during football or at school but I got that positive influence basically 24/7,” said Rusty.

Now retired, Pigott has been driving a school bus for Foley. He said he’s also been able to catch a few games of the current Picayune Maroon Tide team and he’s proud of how they’re doing this season.

“All I’ve heard was good about them and they’ve really had it going the past several years,” he said.