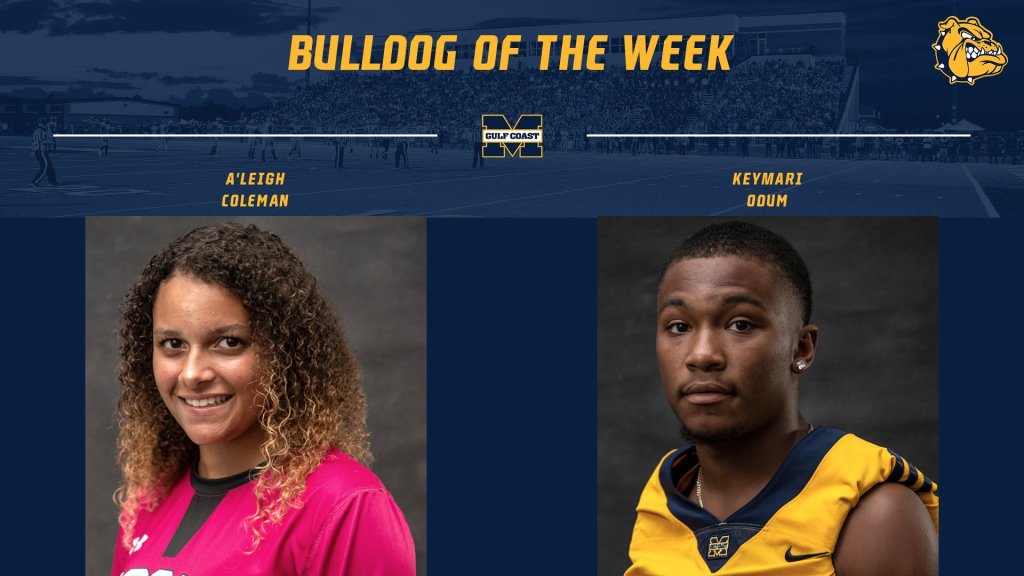 PERKINSTON — A’Leigh Coleman and Keymari Odum have been named Bulldogs of the Week for Oct. 3-9.

Coleman, a freshman keeper from Ocean Springs, stopped 12 shots in a 1-0 loss to No. 8 Northwest Mississippi. She made a number of diving saves to keep the Bulldogs in the game.

Odum, a sophomore wide receiver from Haines City, Fla., had two second-half touchdown passes to help spark a Gulf Coast comeback in a 31-28 win at Copiah-Lincoln. The Bulldogs trailed by two touchdowns in the second quarter, but his 39-yarder got Gulf Coast within four points and his 14-yarder proved to be the game-winner in the fourth quarter.

Chase Kaiser, a sophomore from Natchez, finished 11th in the Folds of Honor Challenge in Allendale, Mich., against a field full of four-year players. He rebounded from a tough first round to shoot 73-70, the second the low round of the final 18.

Brycen Phillips, a sophomore forward from Wiggins, was the only Bulldog with more than one goal and/or assist in a 7-0 win over Northwest Mississippi. He had two assists for Gulf Coast.

Gabe Showalter, a freshman kicker/punter from St. Martin, shined in all his duties during Gulf Coast’s 31-28 win at Copiah-Lincoln. He made his only field-goal attempt from 23 yards, all four of his PATs and was 5-for-6 on touchbacks on kickoffs. He also averaged 41.5 yards on four punts, including a 51-yarder.

Hayden Hill, a sophomore linebacker from Flowood, had eight tackles and eight assists to lead Gulf Coast to a 31-28 comeback win at Copiah-Lincoln.