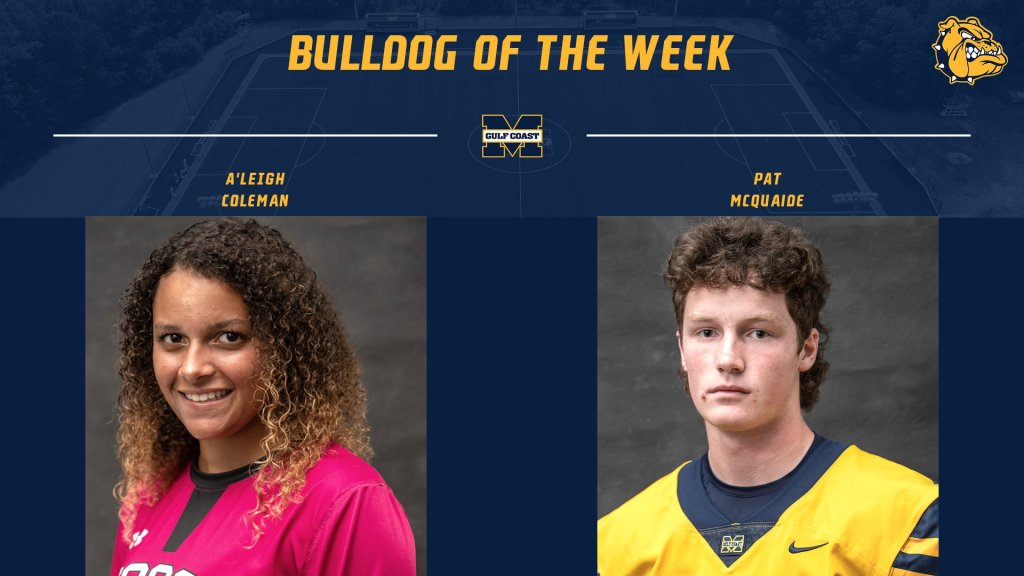 PERKINSTON — A’Leigh Coleman and Pat McQuaide have been named Bulldogs of the Week for Oct. 17-23.

Coleman, a freshman keeper from Ocean Springs, stopped 13 shots in a 1-0 loss to No. 11 Pearl River. She also made six saves in a 1-1 tie at Meridian.

McQuaide, a freshman quarterback from Solon, Ohio, set a new career-best by throwing for 347 yards in a 34-7 win at Hinds. He completed 24-of-34 passes and had a touchdown passing and rushing.

Ashton Taylor, a sophomore midfielder from Olive Branch, scored in both Gulf Coast wins last week. In a 3-1 upset of No. 9 Pearl River, his insurance goal iced a 3-1 win. He assisted on the first goal of the game in a 3-1 win at Meridian, then scored the go-ahead goal.

Alyssa Palisi, a sophomore forward from Diamondhead, scored the Bulldogs’ goal in a 1-1 tie at Meridian.

Gabe Showalter, a freshman kicker/punter from St. Martin, made all four of his point-afters and both field goals in Gulf Coast’s 34-7 win at Hinds. He averaged 38.3 yards per punt, and his field goals were from 21 and 33 yards. Showalter is second in the NJCAA in PATs (34) and third in points (55).

Hayden Hill, a sophomore linebacker from Flowood, had 13 total tackles in Gulf Coast’s 34-7 win at Hinds. He also had a sack as the Bulldogs held the Eagles to 153 total yards.