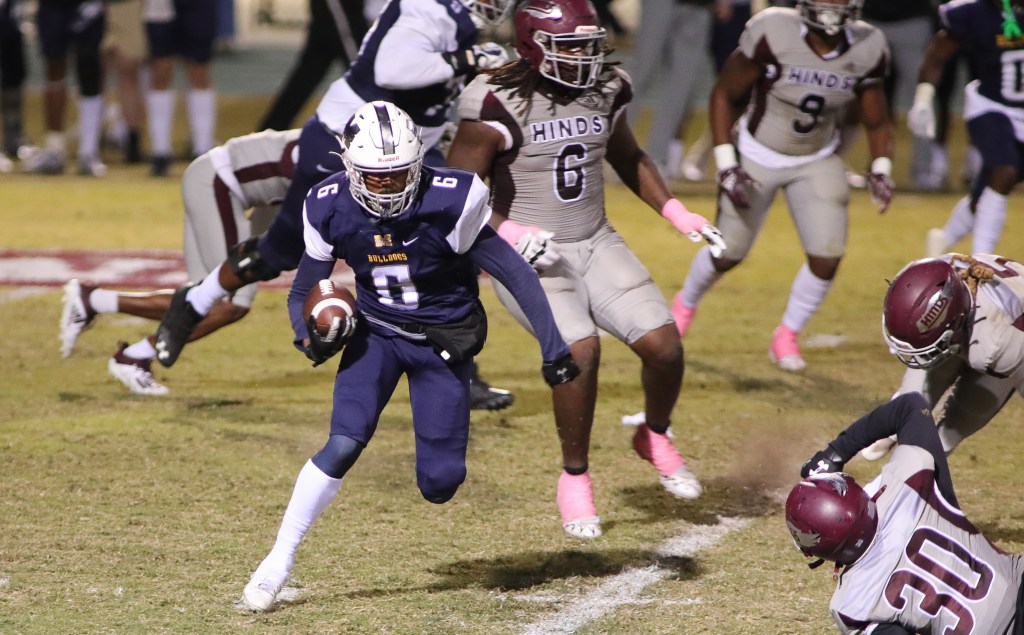 The Regulators held Hinds to 157 yards, allowing only one microscopic drive for a touchdown.

“It was a lot of defensive stops,” Gulf Coast coach Jack Wright said. “That’s what stands out in my mind. It seems like they were always punting after third-and-medium, third-and-long. They converted some, to be fair, but they didn’t convert any critical downs. Our defense just played really, really well tonight.”

Pat McQuaide (Fr., Solon Ohio/Solon) ran for one score and completed 25-of-39 passes for 349 yards and another touchdown. Ramone Bradley (Fr., Fairhope Ala./Fairhope) led the receiving corps with 138 yards on seven catches. Keymari Odum (So., Haines City Fla./Ridge) caught six passes for 82 yards, and Cyrus Hartfield (So., Hattiesburg/Hattiesburg) had six for 63.

The win sets up a monumental clash with No. 4 Jones, and a victory would earn the Bulldogs (5-3, 4-1 South) the top seed and the division title.

Gulf Coast held Hinds to 88 yards on the ground and just 69 in the air. Jervin Smith (So., Columbus/Biloxi) had the game’s only turnover to ice the game in the fourth quarter.

“Coach said in the locker room we have to play hard for 60 minutes,” said fellow defensive back Jamarcus Jones (So., Union/Union). “Everybody came together and we got it done. We mainly had to shut down the run. Once we did that, their whole building would fall.”

Hinds was knocking on the door at the Gulf Coast 1-yard line to start the second quarter but fumbled. Kazarius Bowie (Fr., Jackson/Brandon) recovered, and 10 plays later the Bulldogs had marched down the field, with Xavier Evans (So., Laurel/Laurel) plunging in from 1 yard out. The Bulldogs got big receptions from Bradley, Hartfield and Jonathan Harris (So., Hattiesburg/Petal) for first downs on the drive.

The Gulf Coast defense forced a three-and-out, and the Bulldogs went 68 yards on the next drive. McQuaide handled the final 5 yards on the ground, diving for the pylon and a 14-0 lead.

The Bulldogs’ next possession ended with a blocked punt, which Hinds returned to the 3-yard line. It took the Eagles three plays to get in, but they sliced the lead in half with 1:59 to play.

Perfect execution of the two-minute offense, though, pushed the lead back out. The big play was a 31-yard Bradley reception to convert a third-and-6, and Cam Thomas (So., Picayune/Picayune) scored from the 1 with nine seconds left in the half.

“It’s a reflection on everybody else,” McQuaide said. “Unfortunately, the stats go on my name, but the line did a really, really good job against a tough Hinds front. They’ve got some DBs that people are going to see play on Saturdays. We wanted to throw short and run long. The stats go next to my name, but it’s all them.”

Gabe Showalter (Fr., St. Martin/St. Martin) kicked a 21-yard field goal late in the third quarter and added a 33-yarder early in the fourth for a 27-7 lead.

After Smith’s interception, Cyrus Hartfield (So., Hattiesburg/Hattiesburg) caught a 20-yard touchdown pass with 43 seconds left to end the scoring.

Gulf Coast had 349 passing yards, plus another 122 on the ground. Thomas had 71 yards to lead the charge.

Ishmael Naylor (So., DeKalb/Kemper County) had nine tackles and a sack. Scott Burton (So., Bogue Chitto/Parklane Academy) had another sack, and the Bulldogs racked up seven tackles for loss. Hinds, which averaged 2.9 yards per play, managed only 12 first downs to Gulf Coast’s 23. The Bulldogs had nearly 12 minutes more time of possession.

The Bulldogs were 7-for-16 on third downs conversions and converted both fourth-down attempts.

Gulf Coast hosts Jones next Thursday at 7 p.m. It will be a White-Out game at A.L. May Memorial Stadium. T-shirts are on sale at Gulf Coast bookstores.

“We come in every Sunday with a fresh slate,” Wright said. “We’ve got to look at Jones. I’ve been here five years, and every year we played Jones it’s been a big matchup in the South. It’s no different this year. It’s one you circle on the schedule because you know it’s going to be a great game.”