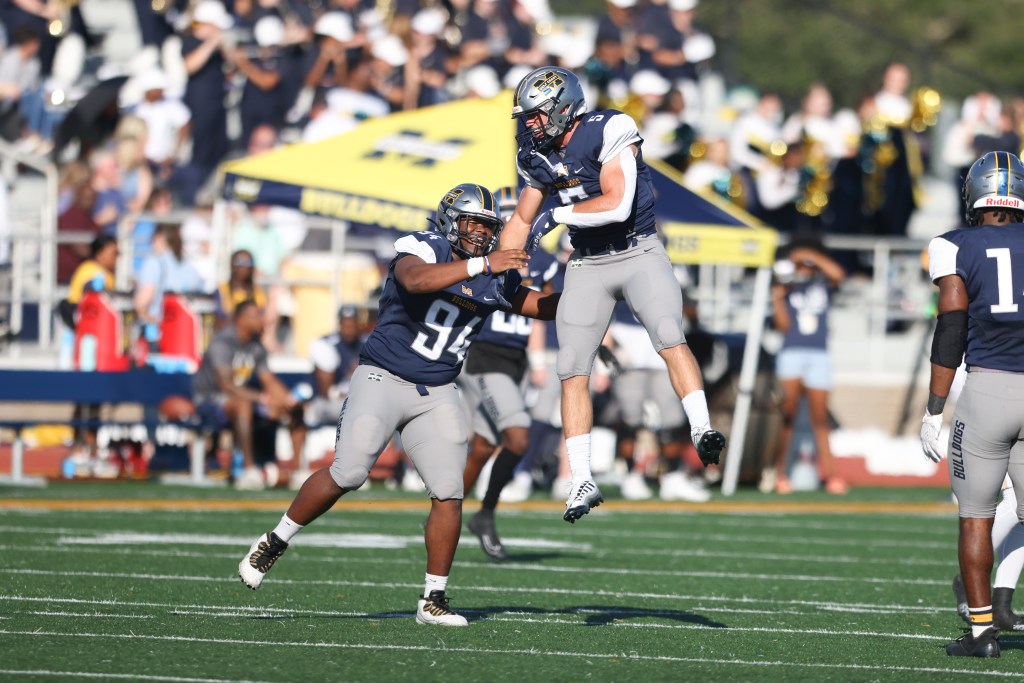 PERKINSTON — The Regulators dominated in a Homecoming victory Saturday afternoon at A.L. May Memorial Stadium, shutting out East Central 25-0.

The Warriors managed just 16 passing yards and 120 total. East Central had just seven first downs, including two on the final drive of the game that ended on a fourth-down interception.

“The point of emphasis tonight was to play a complete four quarters, and I think we did that,” Gulf Coast coach Jack Wright said. “We closed out the game strong on defense. I couldn’t be prouder of them. We played a lot of people on defense, just about everybody that plays defense for us that got out there and contributed. That’s a very good feeling.”

The Bulldogs offense held up its end of the bargain, too, with a pair of 100-yard rushers who averaged better than 10 yards a carry on the way to a 288-yard rushing day as a team. Jamari Thompson (Fr., Pearl/Pearl) ran 11 times for 116 yards and a touchdown, with Cam Thomas (So., Picayune/Picayune) adding 103 yards on nine rushes. He had two touchdowns, the first on a 60-yard scamper less than a minute into play.

“We executed well and worked hard and got it done,” said Gulf Coast offensive lineman Greg Nunnery (Fr., McComb/McComb). “They run hard. Both of them are great backs. We blocked good for them so they could get it done.”

Ramone Bradley (Fr., Fairhope Ala./Fairhope) had six catches for 87 yards, including a 23-yard touchdown in the second quarter that put Gulf Coast up 14-0 at the break.

Thomas scored from 18 yards in the third quarter, and Thompson’s run from the 5-yard line in the fourth made it 28-0. Cyrus Hartfield (So., Hattiesburg/Hattiesburg) caught a 9-yard touchdown from Asher Morgan (Fr., Philadelphia Miss./Philadelphia) to close out the scoring.

Gulf Coast’s stood up to a pair of third-quarter red-zone challenges, forcing turnovers on downs at the 3- and 7-yard lines to preserve the shutout. The first came on a drive that started at the Gulf Coast 9-yard line, and the second at the Bulldogs’ 34.

“We had to put our big boy pants on,” linebacker Hayden Hill said. “That’s what we told everybody, put your pants on and hit ’em int eh mouth. That’s what we did.”

Gulf Coast had eight tackles for loss and three sacks.

“It’s 100 percent the line. I cannot give enough credit to the D-line,” Hill said. “They held them, they stopped them, hit ’em in the mouth so we could make the tackles.”

Gulf Coast (4-3, 3-1 MACCC South) faces a quick turnaround to face a tough Hinds team on Thursday. Kickoff in Raymond will be at 6:30 p.m.

The Bulldogs and Eagles are tied for second in the division, and Gulf Coast can make the playoffs by winning its last two regular-season games.

“We’ve got to be ready to play,” Wright said. “It’s a short week, and it’s tough to play a team the caliber of Hinds on just four days of preparation. It’s a huge challenge on our young players, and our veteran players, to take a step mentally and be ready to play Thursday.”