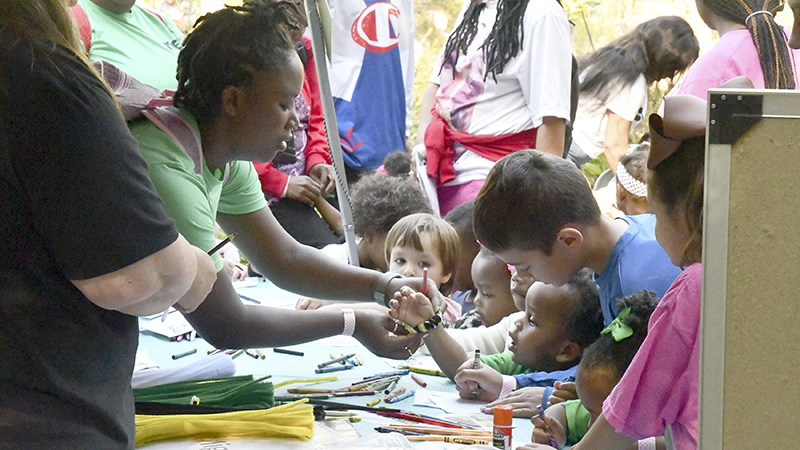 The first day of the Crosby Arboretum’s Bug Fest featured all kinds of creepy crawlers. There were bees, butterflies, wasps and a live Grammostola pulchripes (golden knee) spider the size of an adult hand. Friday’s event catered to elementary and homeschooled children in and around the Picayune area. At the event they learned about and experienced all things bugs, from local Entomologist, University of Southern Mississippi Ph.D students and local Beekeeper Jac Colman.

Kristin Robinson, a Ph.D student at the University of Southern Mississippi, brought a variety of Mississippi and Louisiana native bees and butterflies. She said her objective at Bug Fest is to pique the children’s curiosity by showing that insects are “very interesting.”

Robinson said most native bees aren’t aggressive and for the most part people and children’s safely typically involves staying away from a bees hive or wasp nest. Wasps are a different story. Wasps are usually more aggressive than bees but not all of them. For example cicada killer wasps that are approximately two inches in size and don’t bother humans. Robinson said the most common bees people come across are the American bumblebee, carpenter bees and European honeybees. All are non-aggressive bee species but can still sting people.

Robinson confirmed that when bee stings a person, the bee dies, but that fact does not apply to wasps.

“For bees it’s kind of the last resort defense, which is why they don’t sting people often. Wasps, they can sting multiple times and usually it’s no issue, that is part of why they are more aggressive,” said Robinson.

Fifteen year Entomologist John Guyton brought a live Grammostola pulchripes spider to Bug Fest. They are also called golden knee spiders due to their golden stripe on each knee. When Guyton pulled out his golden knee spider, it rested itself on Guyton’s hand covering him entire palm. Guyton said this is as big as most golden knee spiders will get after their last molting stage. Golden knee spiders throughout their lifetime grow out of their skin like a crab and leave a shell. How many times it molts depends on the species but Guyton’s golden knee molted four times since he’s had the spider. This can happen every few weeks for newborn spiderlings or every few years for large adults.

Golden knee spiders are non-aggressive species but handling one with caution is advised. The best way to touch or handle any kind of spider is to have a two hand cupped method and let the spider rest there. It’s also important to keep a calm state of mind.

“If you get anxious then it gets anxious,” said Volunteer and Entomologist Andrew Sanford.

It’s very important to not drop or throw them because spiders don’t scab like humans, so when they suffer cuts they are highly likely to bleed out and die.

Local Beekeeper Jac Colman provided answers to various bee and honeybee related questions. He brought an empty beehive for display, and showed off his ventilated suit he wears when around active beehives. He also had live bees inside a hive for spectators to view. Bug Fest will continue on Saturday, Oct. 8 from 10:00 a.m. – 2:00 p.m.