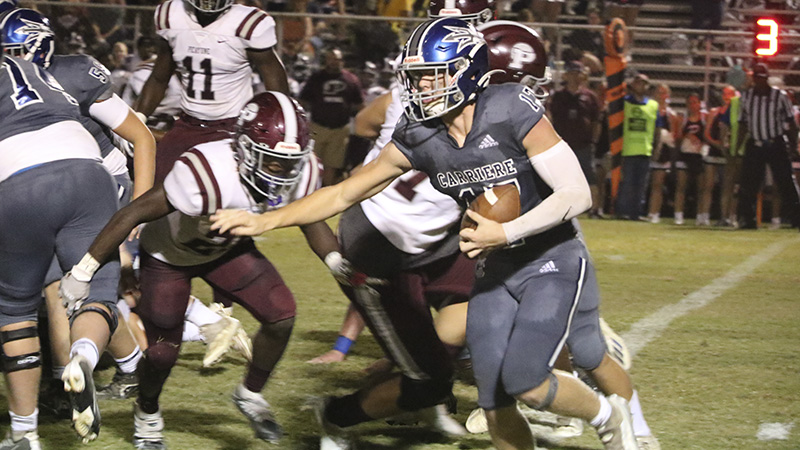 The Pearl River Central Blue Devils football team fell to the number 3 team in Mississippi Division 5A, the East Central Hornets, this past Friday. The 47-12 loss puts PRC 0-5 on the season.

Unlike previous Blue Devils games, PRC was able to score more than once last Friday. Their first touchdown came in the first quarter in the form of a 73-yard touchdown pass from quarterback Qorday Russell to receiver Matthew Michele. At this point the score was 14-6.

Head Coach Jacob Owen said East Central was in man coverage, so the Blue Devils lined up in a triple wide receiver set to exploit the coverage. It caused the Hornets to lose sight of receivers leaving Michele wide open.

“Worked just how we drew it up,” he said.

The next Blue Devils’ touchdown was produced off team effort. Owen said they completed a lot of passes to Tristan Williams and Makade Penton. They also had some help with a couple offsides penalties by the Hornets. Michele was able to cap of the drive with a one-yard rushing touchdown. That score put PRC trailing at 27-12 right before halftime.

PRC didn’t come out of halftime the same. In Owen’s words, “they did not do well,” giving up 20 unanswered points and struggling to produce positive yards.

Russell threw for 189 yards on 7/20 attempts with one touchdown completion and one interception. Penton had three catches for a total of 77 yards. Michelle had 11 carries for 65 yards. PRC finished the night with a total of 47 rushing yards. Defensively, Treyton Mitchell led all tackles will 11. Preston Williamson snagged his first interception of the season and Gavin Graham caused two fumbles on the night.

“We would have liked to gotten off to a faster start offensively and defensively. When you play someone that’s heavily favored you try to make something good happen early for yourself and we were unable to do that,” he said. “But even falling behind like we did our kids fought back and battling back showed a lot of guts on their part. I was proud of the way our kids fought back and making it interesting going into the halftime,” he said.

Next, the Blue Devils will host the Long Beach Bearcats for PRC’s homecoming game. The Bearcats are 0-6 on the season, coming off a 55-6 loss to Gautier. Kick off is set for Friday, Oct. 7 at 7 p.m.