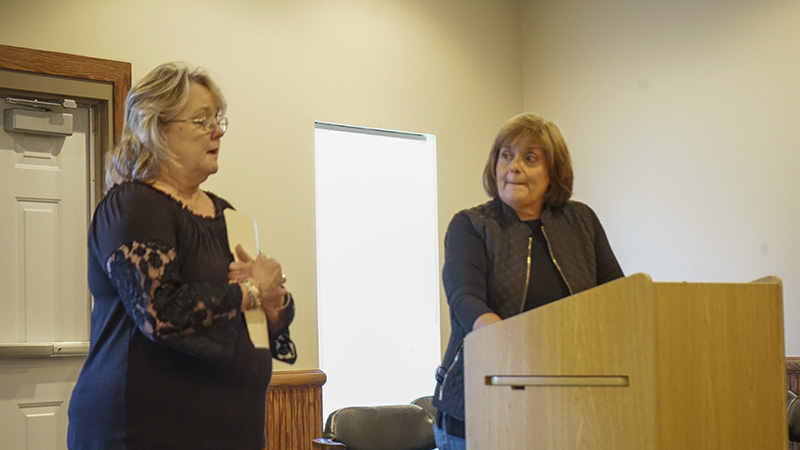 From left Pam LaHaye and Carol Williams address the Board of Aldermen concerning a petition to save the Poplarville Post Office. Photo by David Thornton Jr.

During Tuesday’s Poplarville Board of Aldermen meeting, the Board was presented with a petition concerning the current state of the Post Office.

Carol Williams and Pam Lahaye presented to the petition to the Board regarding the Poplarville Post Office, created by New Orleans Attorney August Martens and a non-affiliated group of community members.

According to previous coverage, the U.S. Postal Service issued a letter to Mayor Louise Smith indicating a decision would be made within 120 days. That decision focuses on the current state of the Poplarville Post Office, which has been closed due to a roof collapse that occurred earlier this year. All business at that location is being conducted out of a mobile postal unit.

As of Tuesday, 30 of those days have passed.

“The more light we can shine on this maybe we’ll get some results, that’s what we’re hoping,” said Smith.

The petition was started on Oct. 7 and was available during  last week’s Sweet Mississippi Tea Festival. So far over 375 people signed the petition, entitled ‘Save Our Post Office.’ The petition is asking the U.S. Postal Service to not demolish the building and instead find an avenue to save the historical building. A case was also made to make the public facility ADA to make a complaint.

Martens said via email to the Item/Democrat that he has been working to determine who owns the building and who is responsible for its maintenance.

“I have not been able to secure any viable answers to these questions. The Mississippi Department of Archives and History stated that the General Services Administration owns the building.  The General Services Administration denies this, and stated that they ‘think the U.S. Postal Service owns it.’  The USPS has not responded, as of yet, to my letter/petition,” Martens said in the emailed statement.

Martens stated he drafted the petition in order to gauge the community’s opinion on the abandonment/demolition of the historic building versus its repair/renovation. According to Marten not one person sated they wanted the post office moved to a new location. In fact most stated it was important for the post office to remain on Main Street where it has served the community for the past 80 years.

Williams and LaHaye said they were told by at least one postmaster that the building hasn’t been treated for termites since January’s collapse. Termites were said to be the cause of the collapse, previous coverage states.

“As a business owner and home owner it puts us in danger,” LaHaye said.

“I know the people that are in charge of this are so removed from the small town of Poplarville that this isn’t on their radar, that they don’t care, and that’s the time that I think maybe it needs to take a different avenue like the ADA,” said Williams.

Members of the Board said they share the frustration Williams and LaHaye displayed, especially since the Board was given the run around on a decision for the building.

The petition is still available at Apples Ltd. and there is a model created by Martens that shows the damaged state of the building.

“In response to the great interest shown by the community, we have the petition circulating at local businesses for additional signing opportunities for patrons of the Poplarville Post Office.  We will also have the petition available at the upcoming Fall Festival and “Witch’s Ride” to be held on October 29th in Poplarville,” said Martens via email.

The Board also approved a motion to allow staff at City Hall to surplus a list of items that are broken or obsolete. Those items include a couple of laptops and old fax machine.