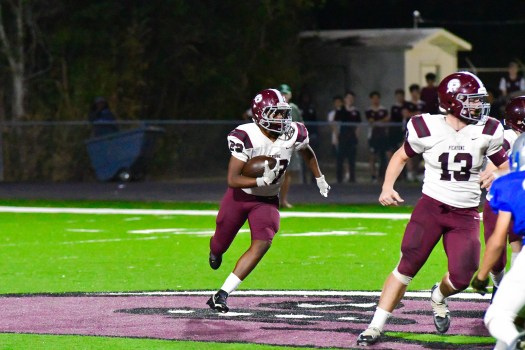 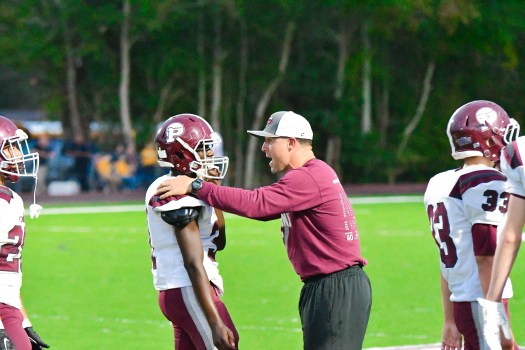 Head Coach Seth Hayden has a one-one moment with a player. 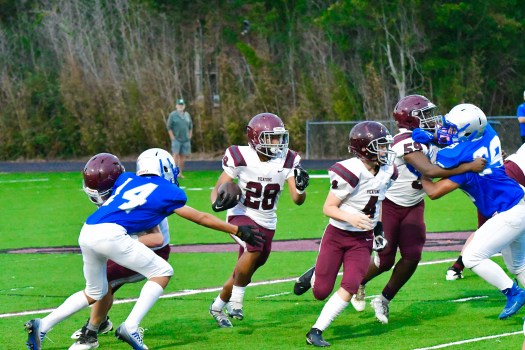 Monday the 9th grade football teams for Picayune and Ocean Springs played for the state championship. Ocean Spring was able to come back from a 12-0 deficit to beat Picayune, 21-18.

It was an offensive thriller with Ocean Springs acting as a fast paced passing team with a strong quarterback in the shotgun formation; Picayune’s ninth graders mimicked their varsity squad as a run first offense with some play action sprinkled in.

To open the game, Picayune recovered its own onside kick. They started off in perfect field position on their side of the 50. Seven plays later Jordan Hathorne rushed for a four-yard touchdown but Picayune failed to convert for two so they led 6-0 just 4 minutes into the game.

Ocean Springs put together a methodical drive, running about eight plays before failing on 4th and 9.

After the turnover on downs, Picayune took their offensive drive into the second quarter that included two first downs for a total of 9 plays, Cameron Quinn rushed for a 15-yard touchdown. With 5:20 to go before half Picayune led 12-0.

Ocean Springs couldn’t get anything going on their drive, so the ball came back to Picayune with three minutes to play. During the Maroon Tide’s sixth play, quarterback Colt Robertson threw an interception giving Ocean Springs the ball with seconds left on the clock. In one play Ocean Springs threw a deep pass for a 63-yard touchdown as time expired. Ocean Springs’ PAT was good so Picayune went into the half in the lead 12-7.

Ocean Springs took their first 14-12 lead after a 33-yard touchdown pass with 34-seconds left in the quarter. Picayune reclaimed that lead in the following drive. It took them 12 plays for Robertson to sneak in a one-yard touchdown. With 2:45 remaining, Picayune led 18-14.

With 37 seconds left to play, Ocean Springs delivered a heart breaker. On their fifth drive with 3rd and seven to work with, Ocean Springs’ quarterback broke free for a nine yard rush. Their successful PAT gave them the lead and in the end Ocean Springs took the Championship game at 21-18.