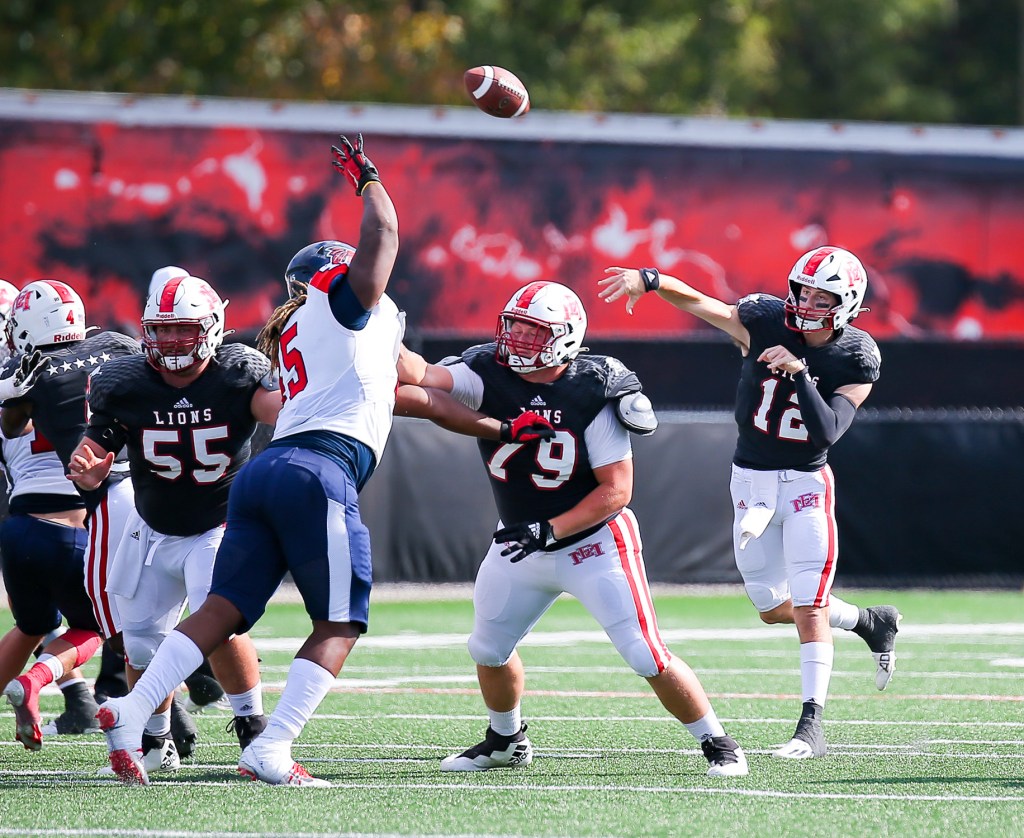 SCOOBA – The 14th-ranked Lions of East Mississippi Community College broke open a tight contest against visiting Itawamba with a 21-point fourth quarter to close out their regular-season home football slate with a 38-10 Homecoming triumph over the Indians during Saturday’s MACCC North Division action played at Sullivan-Windham Field.

EMCC struck first against ICC by getting the opening kickoff and marching 75 yards on eight plays to take an early 7-0 lead on Eli Anderson’s 26-yard scoring strike to Duke Miller with 12:42 left in the first quarter.

Later in the quarter, the Lions had another opportunity to put points on the board following a 16-play, 52-yard drive, but Cole Arthur’s 26-yard field goal attempt sailed left at the 2:22 mark.

Itawamba proceeded to embark on a long drive of its own – 73 yards in 12 plays – but was stopped three straight times after reaching first and goal at EMCC’s 5-yard line. The Indians had to settle for Price Nixon’s 24-yard field goal to make it a 7-3 contest with 12:41 left in the half.

The Lions made a defensive stand on ICC’s next possession by halting the visitors just outside the red zone on a fourth-and-5 incomplete pass play at EMCC’s 24-yard line. Four plays later, Anderson hit Josh Aka with a 48-yard catch and run down the right sideline at the 6:06 mark to put the Lions in front, 14-3, and end the first-half scoring.

Following the halftime break, both teams struggled somewhat to move the ball on offense as well as in the kicking game for much of the third quarter. Following a short punt of 27 yards by EMCC deep in its own territory, Itawamba couldn’t capitalize on a first-and-10 opportunity at EMCC’s 31-yard line when the 41-yard field goal attempt missed wide right at the 7:28 mark.

Another three-and-out by the Lions ended at their own 23-yard line and the subsequent punt was partially blocked to account for only an 11-yard kick. Two plays later, ICC quarterback Karson Green connected with receiver Dylan King for a 30-yard touchdown throw to cut the lead to 14-10 with 6:03 remaining in the third quarter.

A key juncture in the game came late in the third quarter when EMCC’s Tyler Woodard picked off Green following a sixth straight three-and-out by the Lions going back to the opening half. Peter Parrish entered the game at quarterback for the Lions and proceeded to lead them on a 12-play, 49-yard drive that resulted in Arthur’s 21-yard field goal with just seven ticks left in the quarter to make it a 17-10 contest heading to the final quarter.

With Parrish now under center and EMCC’s defensive depth also coming into play late in the game, the Lions dominated the fourth quarter by scoring touchdowns on their first three possessions of the period. After EMCC forced a three-and-out, Kadarius Calloway broke loose for a 72-yard scoring run down the left sideline at the 13:42 mark to increase the margin to 24-10.

The Lions’ defense stepped up big again on ICC’s next possession when Reggie Neely intercepted Green’s pass and raced to the end zone for an apparent pick-six. Though the interception run was called back due to an illegal block penalty on EMCC, Neely’s third interception of the season tied Laurence Sullivan Jr. for the team lead. The Parrish-led EMCC offense promptly went 63 yards on seven plays down the field to take advantage of the turnover. The former Memphis transfer found Tommie Johnson Jr. in the back left corner of the end zone for a 33-yard touchdown toss at the 7:23 mark to lengthen the lead to 31-10.

Following another three-and-out forced by the Lions and a resulting 37-yard punt return by Marc Britt II to Itawamba’s 11-yard line, the former Ole Miss transfer was rewarded with a scoring strike from Parrish also to the back left corner of the end zone with 4:57 left in the game. Arthur’s fifth successful point-after-touchdown kick in as many attempts on the afternoon closed out the game’s scoring to improve EMCC’s records to 5-3 overall and 3-2 in division play.