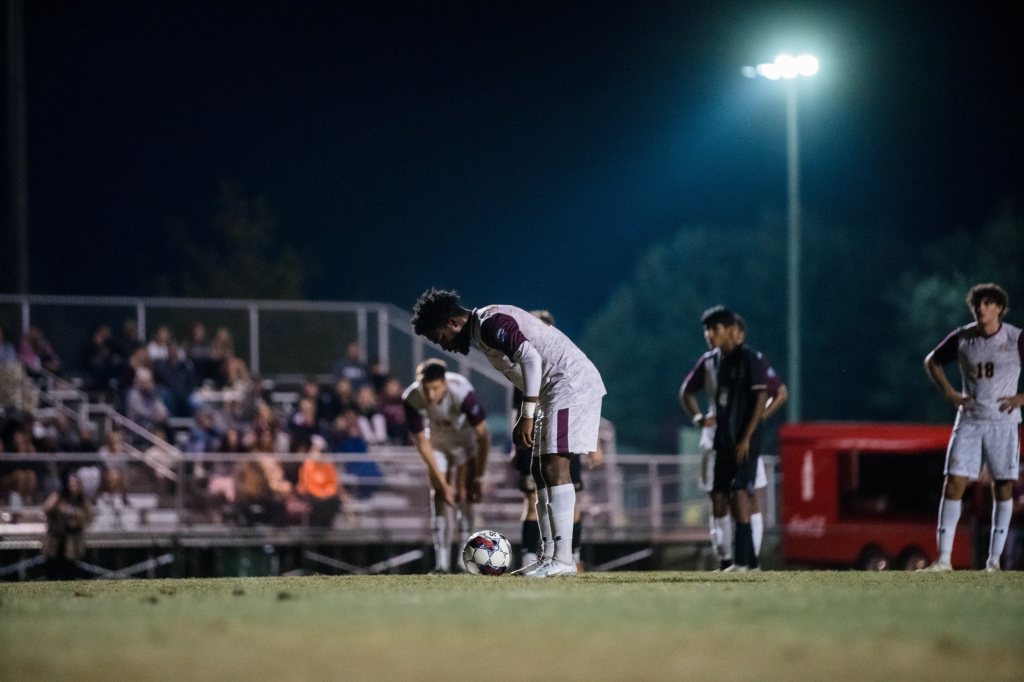 POPLARVILLE, Miss. — The No. 12 Pearl River men’s soccer team had to battle throughout but came away with a big 3-0 victory over East Central in its Region 23 Quarterfinal match Sunday night.

The victory marks PRCC’s eighth consecutive win over the Warriors.

“Ethan (Paschal) has done a really good job at East Central and has turned the program around,” Pearl River head coach Drew Gallant said. “He does a great job with that group so props to him. He had them very organized. It wasn’t a pretty game for us, but we were able to grind it out. I don’t think we utilized some of the things we’ve been working on in training.

“I was just pleased with the overall effort to grab this one and advance.”

East Central (5-7 overall) almost picked up a goal in just the 6th minute of the contest if not for a remarkable save from Maddux Francis (Poplarville). A shot from the Warriors was headed for the back of the net, but Francis jumped high and punched the ball out of play to keep the contest scoreless.

Pearl River (11-3-1) developed a chance moments later as Andre Nicholson (Kingston, Jamaica; Clarendon College) received a pass on the right side of the field. The sophomore lofted a pass into the box and Alex Emery (Gulfport; West Harrison) forcefully headed the ball but it sailed over the goal.

The Wildcats took the lead in the 23rd minute. Harper Baggett (Ocean Springs) sent a ball way up the field to the sprinting Christopher Dommer (Copenhagen, Denmark).

Dommer headed the ball forward, ran under it a second time, and headed it over the Warrior goalkeeper.

Luke Hopkins (Clinton) doubled the Pearl River advantage two minutes later. Alex Emery (Gulfport; West Harrison) dribbled into the left side of the box before crossing the ball into the middle for Hopkins who promptly put it into the back of the net.

Francis came up big again in the 32nd minute. The Warriors built a great chance on the right side of the field. As the ECCC forward went for goal at the near post, Francis came out and blocked the shot to stop the threat.

The Wildcats were awarded a penalty kick in the 40th minute, but Nicholson’s shot was saved by the diving East Central keeper.

The 65th minute saw Dommer almost get on the scoresheet for a second time as he went for goal from deep, but the shot was saved.

Hopkins earned a brace in the 78th minute. Aden Smith (Biloxi) slid a pass from the right side to the middle of the field for Hopkins. On the freshman’s first touch, he chipped it into the right side of the net to extend the PRCC lead to 3-0.

Francis continued his big match in the 81st minute, diving to punch a ball out of bounds and keeping the clean sheet.

Francis finished the match with eight saves and a shutout.

“What a night from Maddux tonight,” Gallant said. “Probably his best performance of the year. He had an All-American type of performance tonight.”

Pearl River will match up with a familiar foe Friday as it takes on archrival Gulf Coast in the Region 23 Semifinals. The match in Ellisville is set to get underway at 1:30 p.m. and will be livestreamed at JCBobcats.com/watch.