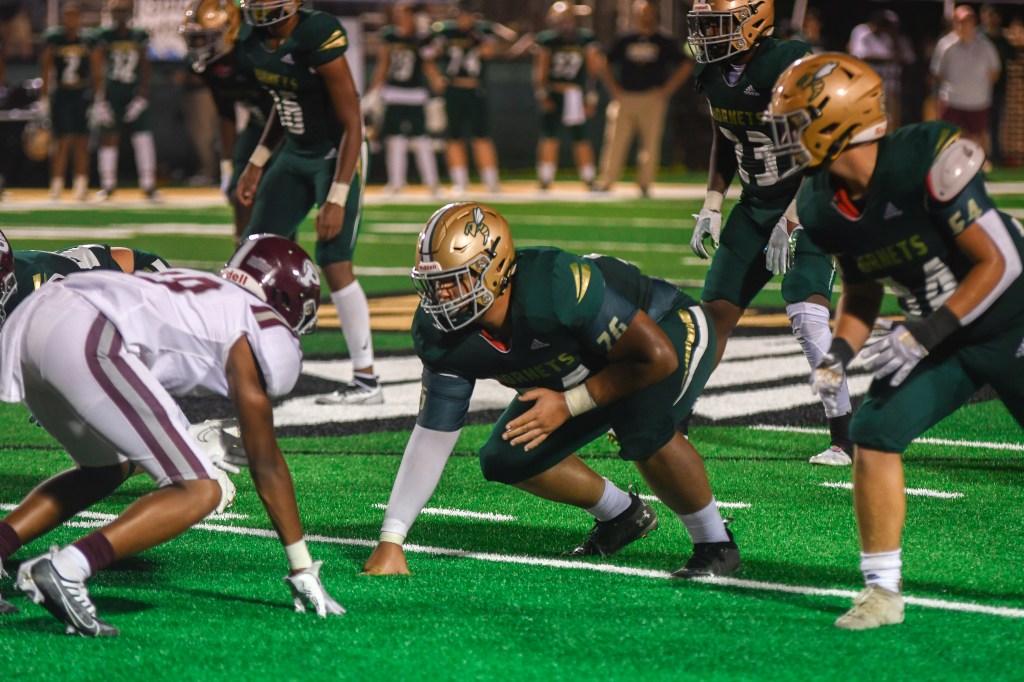 Poplarville’s defensive tackle Aaron Barnes lines up head-to-head against a Picayune lineman during the season opener on Aug 26.

Week two of Pearl River County varsity football features another rivalry matchup between No. 3 Poplarville and Pearl River Central. No. 1 Picayune will be on the road to play 3A Jefferson County (1-0).

The Hornets and the Blue Devils are both 0-1, and are seeking their first win of the season. They’ll battle it out this Friday in Poplarville at 7:30 p.m. Picayune’s season is off to a good start after stealing a road win last Friday against the Hornets. Their match up in Bassfield will kick off at 7:30 p.m.

Beech recognizes PRC as a young and growing team, so he expects them to show up looking better than they were last Friday. He agreed that Poplarville cannot play relaxed against PRC because if they do PRC will become a dangerous opponent.

“They’re a young team so they’re obviously going to get a lot better every time they play. Of course it’s a rivalry game and we’re excited to play,” said Beech.

Poplarville’s keys to winning are keeping the ball off the ground. They had one fumble last Friday, which isn’t bad but they had 5 loose ball situations that could have made things worse.

“We can’t put the ball on the ground and leave it up to the referee to make the decision on rather it’s a fumble or not,” said Beech.

In terms of preparation Beech has loved his team’s willingness to acknowledge their mistakes and their aspirations to fix them.

Blue Devils Head Coach Jacob Owen believes they will play much better this Friday than they did last week. The cat is out of the bag that PRC is a young team, still they are improving and Owen said they’re figuring things out in time for district play.

“They understand that it’s a process, you hate to lose, especially in the manner that we did Friday night but I thought we did some things well. We’re focused on cleaning our mistakes this week and I believe we’re going to play a lot better come Friday,” said Owen.

Since opening the season with a jamboree three weeks ago, Owen said the Blue Devils’ focus and efforts grow weekly. He wants that to continue, especially come district play.

Poplarville’s known for running a “unique style” of offense that can put a defense in for a long night. PRC’s defensive preparation is being catered to that offense.

“You got to really reinvent the wheel to defend them,” said Owen.

Preparation has been going well and the Blue Devils look rejuvenated with new hopes, beliefs and faith, things Owen says are necessary every Friday night.

The Blue Devils’ key to clinching a win will be to have no pre-snap penalties. Last week, the team racked up 5 total against Hancock. PRC also needs to tackle well and be sharp on defense and most importantly be “extremely physical,” said Owen.

Maroon Tide’s Head Coach Cody Stogner said conditioning is this week’s focus. Other than that they’ve tuned in on the small mistakes they made during last Friday’s game. In Stogner’s eyes they left the ball on the ground too much and had several unnecessary penalties.

Jefferson Davis is the reigning 3A state champion and are coming off a big 40-0 win to open their season.

“They’re good, they’re the 3A state champions… they’re full of athletes… it’s going to be a war. They have talent and really good plays so we’re going to have to bring it Friday night,” said Stogner.

Picayune won’t take Jefferson Davis lightly come Friday, if they do Stogner says they’ll get bit. The Maroon Tide has developed an understanding of Jefferson Davis.

They threw away the classification comparisons and look at Jefferson Davis for who they are as a team. And they’re prepping accordingly. Come Friday Stonger wants to see the Maroon Tide in better condition, and give maximum effort for 48 minutes.