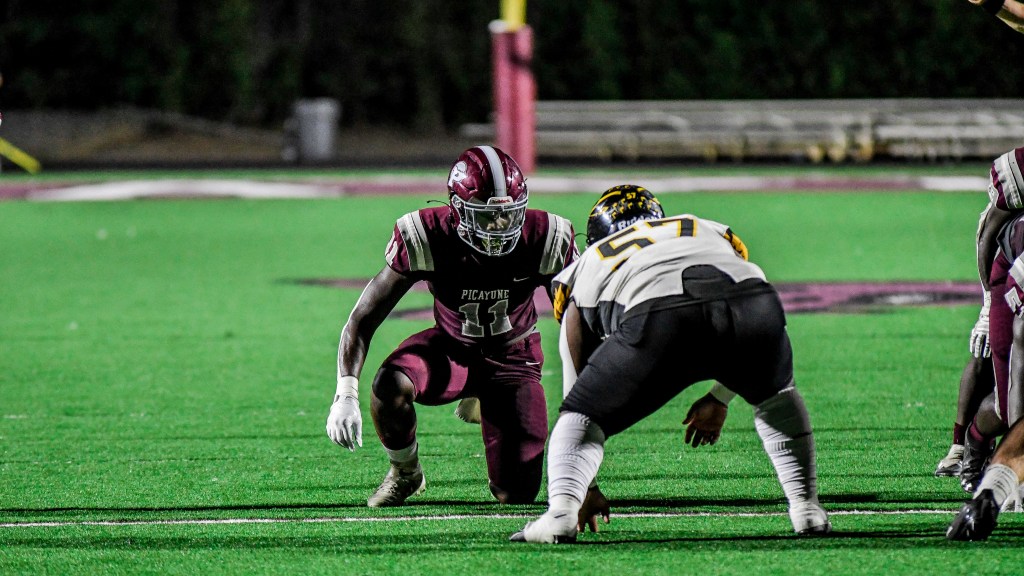 Jamonta Waller explodes off the line of scrimmage during a Maroon Tide win over D’Iblerville, where Waller had 10 total tackles and one sack.

Picayune’s junior defensive end Jamonta Waller has been making waves the past several games. His speed, versatility, college ready skills and physicality have pushed him a long way this season. So much so that Waller has been offered three scholarships from Power 5 schools including the University of Oregon, Florida A&M University and Ole Miss. Other schools showing interest are Florida State, Tulane and Georgia Tech.

Having big schools showing interest is a little overwhelming for Waller. He said he was telling his friends the other day how crazy this moment is for him. Being only a junior, Waller says he’ll get used to it, especially since his older cousin, who used to play D1 football, has been available to provide recruiting advice. He has also been getting support from teammate Dante Dowdell, recruitment coach Lawrence Hopkins, defensive line coach Tyler Smith and Head Coach Cody Stogner

Waller’s journey started after Picayune brought home the 5A 2021 State Championship title. At that moment Waller and his teammates knew things had to change before the 2022 season.

“We knew we had to grow and come back even stronger because we knew how teams will play us. We have to be better. I have to be better and I knew I was going to have to turn into a leader,” said Waller.

“You got to have that mindset, that dog mindset. When you have that there’s nobody that can stop you and we know what we’re reaching for so we know what we got to do and we bring that to the table every Friday. Defense is the heart and soul of Friday,” he said.

Waller said the defense has plans to be the number one defense in Mississippi and so far this season he believes they are. He admitted the Maroon Tide defense was not as strong in week one, but going into week five, he has no worries about the team’s defense.

During the last four games, the Maroon Tide allowed only one touchdown per game. Waller averages 11.8 tackles per game and has made 47 total tackles, 28 being solo tackles. He also leads his team in sacks with 4.5. Waller and Amarion Tyson (MLB) rank in the top 20 in total tackles this year. Waller sits at 17th and Tyson sits in fifth place in Mississippi.

Picayune’s defense is full of threats. Outside of Waller the team also has defensive end Jabari McWilliams.

“That’s definitely my right hand man, he sees me make a tackle he hypes me up, if he makes a tackle he knows I’ma do the same for him,” he said.

What Waller wants out of his time in Picayune football is to go pro.

“I love this. Football, it keeps me busy and I don’t have to worry about anything else other than football and school,” he said.

Waller added that their defense never gets complacent, always staying hungry with that bulldog mindset.

Of the offers made so far, Waller listed his top schools as Ole Miss, Oregon and FAMU.