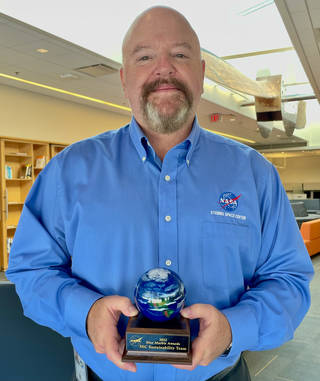 As attention to climate and environmental issues grow more and more urgent, NASA’s Stennis Space Center is emerging as a leader in sustainability, evidenced by a recent prestigious recognition.

NASA recently honored the Stennis Sustainability Team with a Blue Marble Director’s Award for its leading work in energy reduction across the south Mississippi center. Stennis. Sustainability Team Lead Alvin Askew accepted the award during a Sept. 20 ceremony at NASA’s Langley Research Center in Hampton, Virginia. Overall, eight agency teams and individuals were recognized for environmental excellence and leadership during the ceremony.

“This is a great affirmation of hard work not just by a dedicated team of individuals but by everyone at Stennis,” Center Director Rick Gilbrech said. “It shows that when we commit and work together, we can make a real difference both today and for the future.”

The high-level agency award affirms a concerted ongoing effort by Stennis not only to meet federally established energy reduction goals but to establish and maintain sustainability practices across the federal city site. The scope and success of the work is reflected in an annual Sustainability Report and Future Plan.

Stennis specifically was highlighted during the recent awards presentation for its use of Geospatial Information System (GIS) technology to reduce energy usage and costs. Use of this technology helped reduce overall energy usage at Stennis by 3.5% in the most recent year of record.

The sustainability team used the GIS technology to create a Stennis Energy Intensity Map that shows buildings sitewide in a color-coded format to indicate levels of energy intensity or usage. A click on the map shows a building’s current energy intensity, along with data from the previous two years. The data shows trends in energy usage, identifies areas of needed focus, and confirms success of the team’s reduction efforts.

The map also has helped the team award a contract to complete Existing Building Commissioning on 10 buildings at Stennis. Existing Building Commissioning is a systematic process for assessing, optimizing, and verifying the performance of a building’s systems. The 10 Stennis projects are estimated to provide energy, as well as operations and maintenance, savings of more than $300,000.

In addition, the sustainability team used the GIS map to implement the first utility energy service contract at Stennis. The Stennis contract focuses on the site’s High Pressure Industrial Water Facility and is expected to achieve enough energy reduction to pay back an initial $600,000 investment in four-and-one-half years, followed by continued savings.

Following up on this success, the Stennis team worked with NASA Headquarters in Washington to convert an existing project into an agency-funded utility energy service contract. The new contract is expected to result in enough energy savings to pay back the $2.1 million investment in less than 12 years, with continued savings thereafter.

Such efforts are paying off with consistency at the center. Since the Stennis Sustainability Team was established, the site has been one of the top four achievers among NASA centers for energy use intensity reduction each year. It has developed and implemented projects to reduce sitewide facility energy use intensity from its baseline by as much as 48.6 percent.

The team also has reduced water usage by 45 percent since 2007, exceeding established reduction requirements. The team has contributed to agency-level reduction efforts as well, with Askew serving as the team lead for a NASA project to optimize the Energy and Water Support contract.

“I am very proud of the great Sustainability team we have at Stennis,” said Center Operations Director Patrick Appelman. “The work that resulted in this award will be a launchpad for significant energy savings at Stennis Space Center as well as all across NASA.”