Six players score in No. 7 PRCC’s rout of Hinds 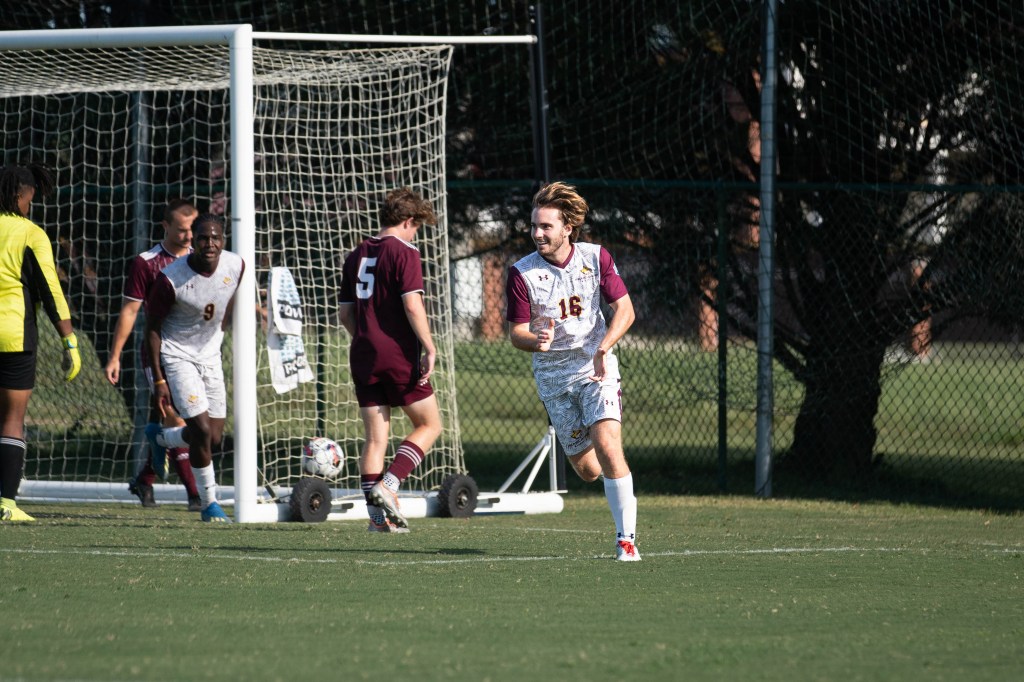 POPLARVILLE, Miss. — Although it has been nearly two weeks since its last match, the No. 7 Pearl River men’s soccer team didn’t look like it missed a beat Tuesday night against Hinds. The Wildcats netted six goals to defeat the Eagles 6-2. Each PRCC goal was scored by a different player.

“I thought we looked pretty good. Especially since we’ve been off for so long,” Pearl River coach Drew Gallant said. “We have been off for two weeks. We kept having games cancelled due to the weather, but we didn’t look too rusty. I was pleased with how things went. We used all of our players today. Overall, a great performance.”

Pearl River (3-1 overall) was off and running right from the start, needing just three minutes to force the first Hinds (0-4-1) save of the night. Brandon Elkins (Bay St. Louis; St. Stanislaus) attempted to serve a ball into the box but it was deflected. The ball found its way back to the right back whose shot was saved by the Eagle goalkeeper.

11 minutes into the contest, the Wildcats got on the board for the first time. Andre Nicholson (Kingston, Jamaica.; Clarendon College) found a good opportunity to shoot but his ball banked off the post. Christopher Dommer (Rungsted, Denmark) found the rebound and crushed it home to give PRCC the 1-0 lead.

Much like they’ve done all year, the Wildcats capitalized on a set piece in the 22nd minute. Dommer stepped up to take the corner kick and sliced it into the box. Durron Myers (Gulfport) ran forward, jumped and headed the ball into the back of the net. The header extended the lead to 2-0.

Mo Diallo (Gulfport) pushed the score out to 3-0 in the 40th minute of the evening. Julio Gruba (Curitiba, Brazil) fought for a ball outside of the box before passing off to Diallo. The Wildcat forward took a few steps to his right before placing a ball into the back of the net from 20 yards out.

The 52nd minute saw PRCC get on the scoreboard thanks to the foot of Nicholson. A ball that was smashed into the box deflected and rolled all the way out to the Wildcat midfielder. On his first touch, he crushed the ball past the diving goalkeeper for a 4-0 lead.

One minute later, Vinny Gruba (Curitiba, Brazil.) joined the scoring barrage, making it a 5-0 contest. The left-footed sophomore caught a ball and crushed it across the ground into the bottom left corner of the net.

Jackson Meeks (Biloxi; D’Iberville) picked up the first goal of his Wildcat career in the 56th minute. After a shot was saved by the HCC keeper, the ball bounced back to the sprinting Meeks who crushed it into the top of the net to make the score 6-0.

The Eagles went on to add in two late goals, but the rally was cut short as PRCC held on to win the match.

After the match, Gallant highlighted the play of defenders Peyton Ladner (Gulfport) and Ethan Boles (Gulfport).

“Peyton and Ethan were great today,” he said. “We named Peyton Man of the Match today, but I also thought that today was the best game that I’ve seen Ethan play. It was a great day for both of those guys.”

Pearl River returns to action Thursday for a matchup with Meridian. The conference match is set to get underway at 7 p.m.

All home Pearl River soccer games are livestreamed for free at PRCCMedia.com/gold.

Fans who have Roku, Amazon Fire or Apple TV devices can also watch the Wildcat broadcasts by downloading the “Pearl River CC” channel from their app stores.