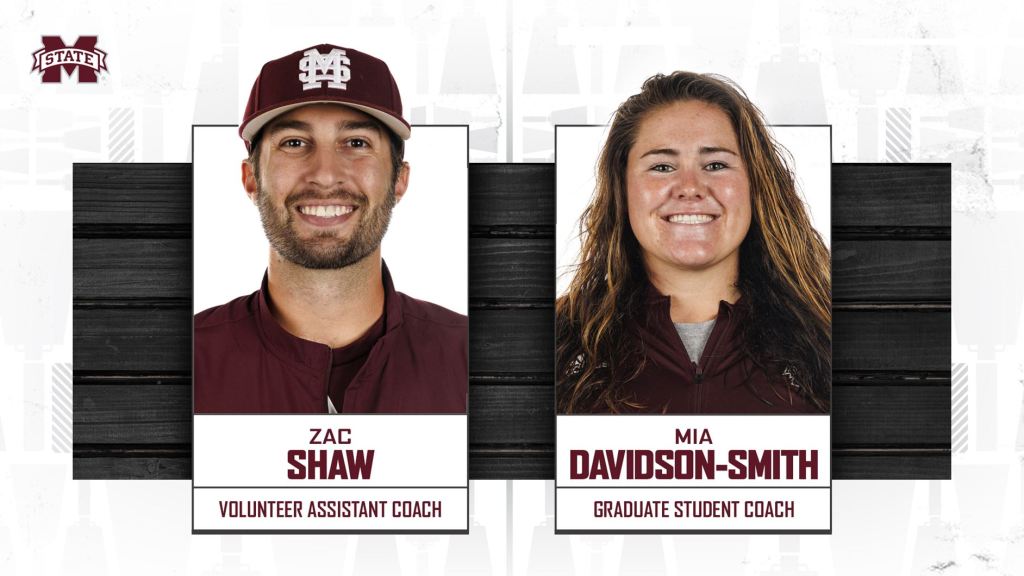 STARKVILLE – Mississippi State head softball coach Samantha Ricketts has completed her coaching staff for the 2023 season with the additions of Zac Shaw and Mia  Davidson-Smith.

Shaw, a current member of the United States men’s fastpitch team, will serve as the Bulldogs’ volunteer assistant, while Davidson-Smith returns to her alma mater as a graduate student coach while completing her master’s degree. Shaw will be competing in New Zealand this fall at the WBSC Men’s Softball World Cup.

Davidson-Smith recently completed her rookie season of professional softball with Athletes Unlimited. Shaw most-recently was on staff at Kansas City where he was the hitting and infield coach for three seasons. Shaw also previously spent time as a graduate assistant at Missouri.

“We are excited to complete our coaching staff with the additions of Zac and Mia,” Ricketts said. “Zac’s experience in the SEC and playing at the highest level with Team USA will be a great benefit to our program. His background working with different position groups and hitters will bring new ideas to our coaching staff and we are eager for him to get started.”

Shaw played for Team USA at the 2022 Pan American Games and batted .526 (10-for-19) in that tournament. He will assist with the Bulldogs’ hitting and infield work. While at Kansas City, he helped the Roos to their first ranked win in program history, knocking off then-No. 6 Oklahoma State on the road in Stillwater in 2021.

Davidson was arguably the most-feared hitter in the Southeastern Conference over the past five years. She holds the conference’s career record with 92 home runs, which ranks third in NCAA history. In her final season, she was walked or hit by a pitch more times than she recorded a hit. That continued in her first professional season as she led the league in hit-by-pitches and was fourth in walks while driving seven of her 10 hits on the year for extra bases.

“Welcoming Mia back as part of our coaching staff was a no-brainer, and we know she is going to be an exceptional young coach just as she was as a player,” Ricketts added. “Mia has always been an extension of our staff with her leadership skills and willingness to teach, and we are looking forward to her beginning her coaching career with the program she has helped build.”

Davidson is expected to assist with scouting, hitting, operations and equipment.