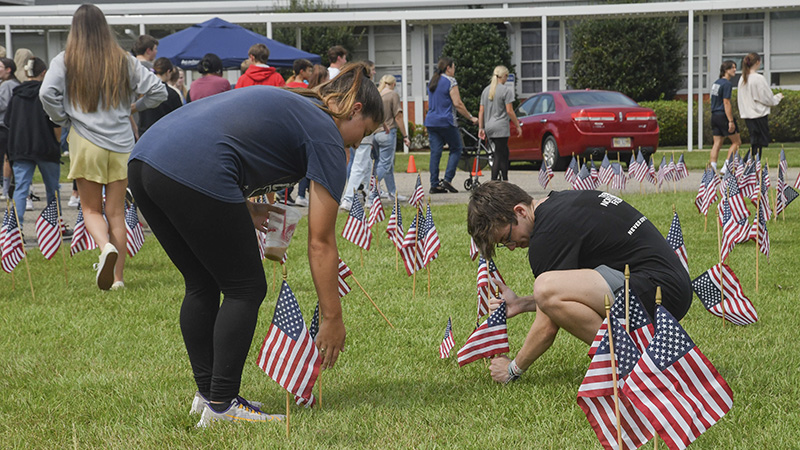 They held ceremonies at the campus flagpole at four times throughout the day. The first was held at 8:46 a.m. that included introduction of the new NJROTC platoon. Then there was a moment of silence remembering the first strike of the terrorist attack on America through a commercial airliner impacting the north tower on 9/11. The centerpiece of the morning ceremony involved the NJROTC lowering the flag to half mast and the playing of the song “Retreat.” For the rest of the day students, faculty, administrators and support staff were invited to commemorate the events of 9/11 by leaving a memoriam in the form of a wreath, rose, drawing or cross. Afterward, everyone said a prayer and planted a miniature flag provided by NJROTC on the ground by the flagpole.

At 10 a.m. NJROTC members posted the service colors in front of the flagpole, led by commander Brandon Spears.

At 11:20, there was tribute honoring the service members who answered the call of duty in the aftermath of the events of 9/11. That ceremony concluded with a Prayer of Remembrance offered by the NJROTC chaplain. Students also planted a miniature flag on the ground after the prayer.

The final ceremony was held at 3:15. It included the evening colors and the NJROTC stowing the accumulated memoriams.

Col. Todd Ryder said the day’s ceremony went well, for several reasons, one of which was because the weather on was acceptable. Previous ceremonies were held on “really swelteringly hot days,” said Ryder. He also said the platoon did remarkably well during the first ceremony.

In terms of the significance of the ceremonies, Ryder said, “It’s a day really to celebrate America, acknowledging that no matter what faults or flaws that may be, we still remain the last best hope of Earth.”