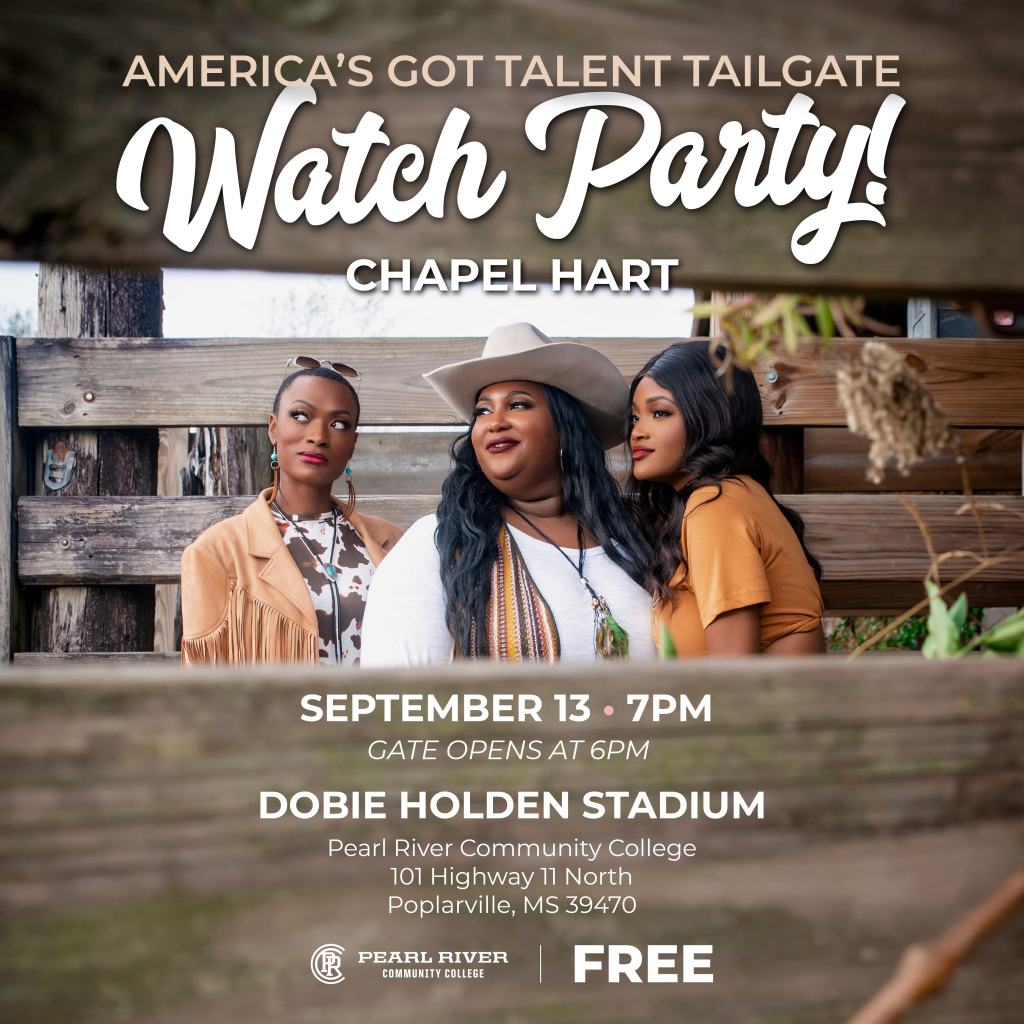 POPLARVILLE, Miss. — Pearl River Community College invites the community to join students and staff in their support of hometown stars, Chapel Hart, with a free outdoor watch party for the America’s Got Talent Finals episode on Tuesday, September 13. Attendees can cheer on the Poplarville native group while also voting for them during the show.

All Chapel Hart fans near and far are invited to watch the show at Dobie Holden Stadium in Poplarville. Gates open at 6 p.m. with the show broadcast beginning at 7 p.m. and ending around 9 p.m. Several PRCC student groups will be on hand to line the entrances to the stadium excited to welcome Chapel Hart fans to the event. PRCC President, Dr. Adam Breerwood, will welcome the audience to the event before representatives of Pearl River County say a few words. During the final minutes leading up to the show’s start, The Spirit of the River Drumline will provide a countdown to the start of the program.

A Hart family tailgate area will be set up in the South End Zone. Fans are welcome to sit in the stands or bring lawn chairs and blankets to sit on the field. No grills are permitted near or on the field. Children 12 years of age and under must be accompanied by an adult. Anyone attending is reminded that PRCC is an alcohol and tobacco-free campus.

Concessions will be available for purchase (cash only) before and during the watch party with all proceeds going to fund the annual Wildcat Wonderland scheduled for Thursday, November 17. Wildcat Wonderland is a holiday-themed event that is free to the public with a variety of fun activities for families and character favorites to visit. The wintery evening ends with Twas the Night, a student concert event, which does have a nominal fee to attend.

Official Chapel Hart merchandise will be for sale at the watch party. Voting will begin immediately following the end of the show.

PRCC has been conducting a water drive in conjunction with the City of Jackson. The watch party will be the last opportunity for area residents to drop off water. This water drive will aid Jackson residents as they recover from the water crisis brought to a head by the Pearl River flooding. Residents throughout the Jackson area are still under a boil water advisory with no definitive date as to when the water will once again be safe for drinking.

All donations will then be delivered to a designated donation site in Jackson the next day by members of the Wildcat Family to show support for our state. PRCC encourages all Chapel Hart fans to come with water in hand to help pay it forward to Jackson residents in need.

Country music band Chapel Hart features sisters Danica and Devynn Hart and their cousin Trea Swindle. Hailing from Poplarville, Mississippi, they have long dreamt of breaking into Nashville’s country music scene. The group takes great pride in making music that they feel unites people from all walks of life.

In 2021 Chapel Hart was inducted into CMT’s Next Women of Country, the institution that has been known to help up-and-coming female country artists such as Kelsea Ballerini, Ashley McBride, & Gabby Barrett to name a few. This Mississippi trio’s music has reached fans around the globe earning them the title of “International Group of the Year” as well as “International Song of the Year” for the single “You Can Have Him Jolene” in Scotland. They were also nominated in multiple categories by the British CMAs including “Group of the Year” and “Album of the Year” for their release “The Girls Are Back In Town.”

The trio has a natural ability to make people join together in song and dance during their live performances. The ladies will often treat their audiences to three-part harmony A Capella arrangements that range from energetic and playful to emotional and chilling. Chapel Hart has entertained people from all over the world, and the decision is always unanimous, there’s no experience quite like the Chapel Hart experience!

Chapel Hart has performed twice now on America’s Got Talent. The first time was their audition performance during which they captured the hearts of America by performing their original song “You Can Have Him Jolene”, this being a twist on Dolly Parton’s classic hit “Jolene”. Not only did they capture the attention of everyone watching from home but Dolly herself commented on their performance saying how much she enjoyed the song. The trio was also awarded the second-ever “America’s Got Talent” Group Golden Buzzer. Their second performance on AGT dominated the stage with another original “The Girls Are Back in Town.”

Pearl River is inviting all to join together to celebrate Chapel Hart’s performance on the America’s Got Talent Finals episode and show the nation what hometown support looks like!