PRCC grabs emotional victories over Northwest and Lurleen B. Wallace 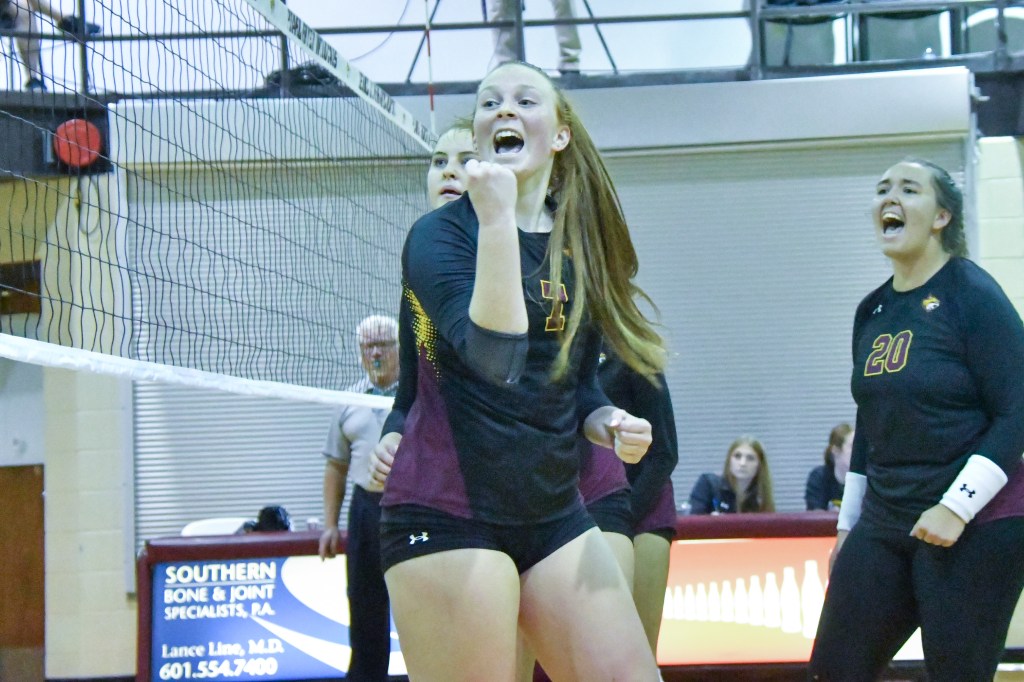 “These girls blew us away today. Every single one of them,” Pearl River coach Haley Chatham said. “They played confident and tough against a good Northwest team. Using smart shots, great passing and good block reads won that game. They fought through fatigue in a knock=down, drag-out with Lurleen B. Wallace. They have hands-down the best defense we’ve seen this season. Pulling it out in five took some tenacity. When you get tired, it’s easy to give away momentum. We didn’t let that happen tonight.

“I am so lucky to get a sideline view of these girls doing things they didn’t know they could do. They get better every game, and it’s a pure joy to see it happen.”

After the first few points of the match, it appeared that the first matchup of the day between Pearl River (11-8 overall) and Northwest (6-10) was going to be a battle. With the score tied up 2-2, the Wildcats started to pour it on.

PRCC retook the lead 3-2 after Natalie Bartholomew (Brandon) smashed a kill in front of the NWCC players. On the very next play, Abbie Franks (Ocean Springs) rose high in the air and blocked a kill attempt by Northwest to make it a 4-2 contest.

The Wildcats extended their lead out to 10-4 soon after thanks to a great serve from Jolee Gibson (Brandon). The freshman tucked a ball just inside the back line for the ace.

The ace sparked some momentum for the Wildcats as they went on an 8-2 run to extend their lead to 18-6.

The Rangers grabbed a few more points down the stretch, but the Wildcats closed out a dominant set one to win 25-11.

PRCC jumped out to a 9-4 lead in the second set, using a Gibson ace and a Bartholomew kill.

Northwest immediately battled back into the set, cutting the deficit to 11-10. Julianah Overstreet (Vancleave) made it 12-10 right after, using a no-look tip to place a ball between three NWCC defenders.

Northwest fought back and took the lead 14-11, but then the Wildcats rattled off a remarkable 9-1 run to retake the lead 22-15. The run was highlighted by an ace off the hand of Gibson.

PRCC punctuated the set two victory not long after with a massive kill off the right hand of Sammie Smith (D’Iberville) to win 25-21.

Pearl River found itself with an 8-5 lead during the early part of the set thanks to a Smith kill and an Anna Claire Sheffield (Canton; Jackson Academy) ace, but Northwest battled back to tie up the score 8-8.

Neither team grabbed a big lead during the middle portion of the set and eventually found themselves tied at 22-22 in the late portion of the match. PRCC briefly retook the lead, but the Rangers closed the set to win 26-24.

The fourth set proved to be the final of the match. Although things were tied 5-5 early on, Pearl River quickly jumped ahead 8-5 after Bartholomew sent a kill flying off the hand of a Ranger and out of bounds.

The Wildcats stretched their lead out to 17-13 midway through the set before starting to put the match away. Smith made it 21-15 by softly dropping a ball in front of a few defenders. Overstreet then smashed a ball through a block attempt for a kill.

Smith capped the big 25-15 win moments later with a thunderous kill, ending the match in the process.

The Wildcats flew out of the gate in their second match of the day, taking an 8-5 lead off a kill from Jasmine Burdine (Biloxi).

PRCC added three consecutive points not long after to take a 13-8 lead. Bartholomew tallied the first point with a kill. The next came after Burdine crushed a ball off the fingertips of a Lurleen B. Wallace (10-8) player and out of bounds. Allison Carpenter (Ocean Springs) added the last point by dropping a ball in front of the diving LBW libero for an ace.

LBW roared back in the late half of the set to cut the deficit to one. On the next play, Overstreet faked like she was setting up a Wildcat for the kill and instead pushed it over the net for a point. The play made it a 20-18 game.

The teams eventually found themselves deadlocked at 22-22 before LBW closed out the set 25-23.

In set two, the Wildcats and Saints went back-and-forth, battling to seven ties in the early portion of the set. With the score tied 7-7, Smith picked up a thunderous kill that seemed to spark Pearl River, sending the Wildcats on a big run to take a 17-13 lead.

The beginning of set three saw the Wildcats grab each of the first two points. The first came after an LBW mistake. On the second, Sheffield capitalized on a drawn-in defense by tucking a kill just behind the Saints’ players.

PRCC continued to build on its lead, extending it out to 11-3 on a Carpenter ace. Lurleen B. Wallace didn’t go away easy though as they fought back to tie things up at 17-17.

LBW found some momentum and propelled itself to a 24-22 lead. Franks picked up a kill on the next play to cut the deficit to one point and Overstreet tied it up by sneaking a ball over the head of the LBW defenders. The Wildcats then took a lead on a mistake by the Saints before Bartholomew ended the set by poking a ball over and down for a 26-24 victory.

Lurleen B. Wallace flipped the momentum in set four. Despite the Wildcats trying their hardest to get back into the game, the Saints evened up the match score by winning the set 25-19.

The Saints jumped out to a 4-1 lead in the final set of the day, forcing a Wildcat timeout. The message that Chatham gave was heard as the Wildcats stormed back to take a 5-4 lead.

PRCC extended its lead out to 9-6 soon after with the help of a tap over by Smith. LBW stormed back once again and tied up the match 11-11.

The Wildcats continued to fight and finally put an end to the set with a huge block by Burdine. The block resulted in a 15-13 victory in the set.

After the matches, Chatham highlighted the play of sophomore setter and outside hitter Overstreet.

“Julianah came to play tonight,” she said. “We lean on her in almost every facet of the game and she carries us well.”

Burdine was another Wildcat that shined on the day.

“Jasmine had her best matches of the season today,” Chatham said. “Her passing, hitting and blocking were all spot on.”

“Our outsides Natalie and Sammie had killer performances at the net,” she said. “Jolee ran the court like a dream and gave her hitters the best matchups possible. Allison came up big defensively and in serving. She’s becoming a boss in the backcourt and we love it.”

Pearl River hits the road Saturday for a doubleheader against Coastal Alabama – East and Bevill State. The matches are set to get underway at 3 p.m.