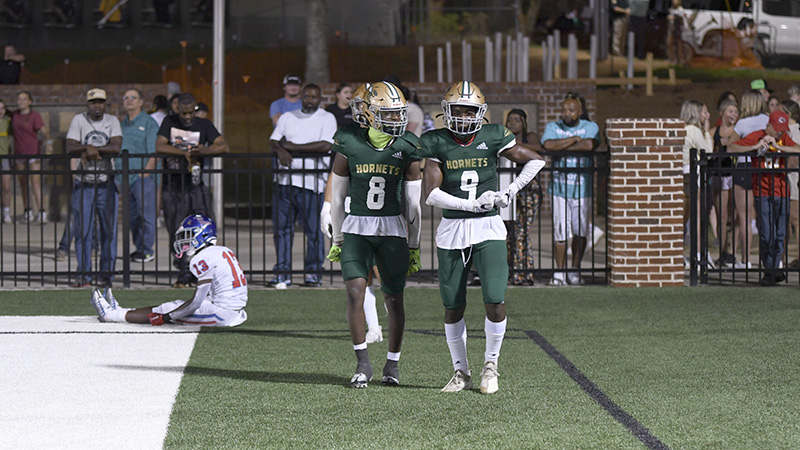 The Poplarville Hornets improve to 4-1 after another dominant win Friday, this time against the Pass Christian Pirates. The final score was 42-7.

On the night Poplarville racked up 398 rushing yards and 13 passing yards for a total of 411 offensive yards. Avan Jarvis led with 14 carries and 153 yards. Maurice Travis ran the ball 17 times for 150 yards on the night.

The Hornets first score of the night came through five plays covering 55 yards when Avan Jarvis capped the drive off with a seven-yard run. The Hornets took a 7-0 lead after Kyler Boothe’s PAT with 4:30 to play.

Pass Christian’s offense matched the Hornets, completing two passes on their drive. Then, on first down with the ball on the Hornets 16, they threw it again to Larry Burks for a 16 yard touchdown. That lone scoring drive took eight plays covering 62 yards.

Poplarville started their next drive on their own 45.  They took their drive into the second quarter and capped it off with a goal line touchdown. In seven plays covering 55 yards Maurice Travis finished the drive a two-yard touchdown giving the Hornets back their lead at 14-7.

Due to the Hornets’ strong defense, the Hornets’ offense was able to extend the lead. In one play Jarvis ran the ball out of the wildcat formation for a 37-yard touchdown, widening the Hornets’ lead to 21-7 with 9:40 left to play until halftime.

With 7:00 to play, Poplarville capitalized on another scoring drive through 11 plays covering 95 yards. Quarterback Matt Will decided to get on the board with a goal line keeper, giving the Hornets a 28-7 lead going into halftime.

Out of the halftime break, Pass Christian was forced to punt after running five plays. When Poplarville had the ball Will threw an interception but Pass Christian didn’t have the ball for long. The Hornets’ defense was on top of every pass play, and it really messed with the Pirates’ rhythm. Poplarville scored on the next two offensive drives to close out the game. With 4:40 to play in the third the Hornets ran nine plays that covered 77 yards for a 35-7 lead when on third and goal Jarvis rushed the ball in.

With 2:30 to play in the third, Poplarville’s final score occurred after just four plays when on first and 10 on the 14-yard line Travis carried the ball into the end zone.

Next, Poplarville will be on the road to play the Purvis Tornadoes (4-1), the first district game of the season. Kick off is set for Friday, Sept. 30 at 7:30 p.m.