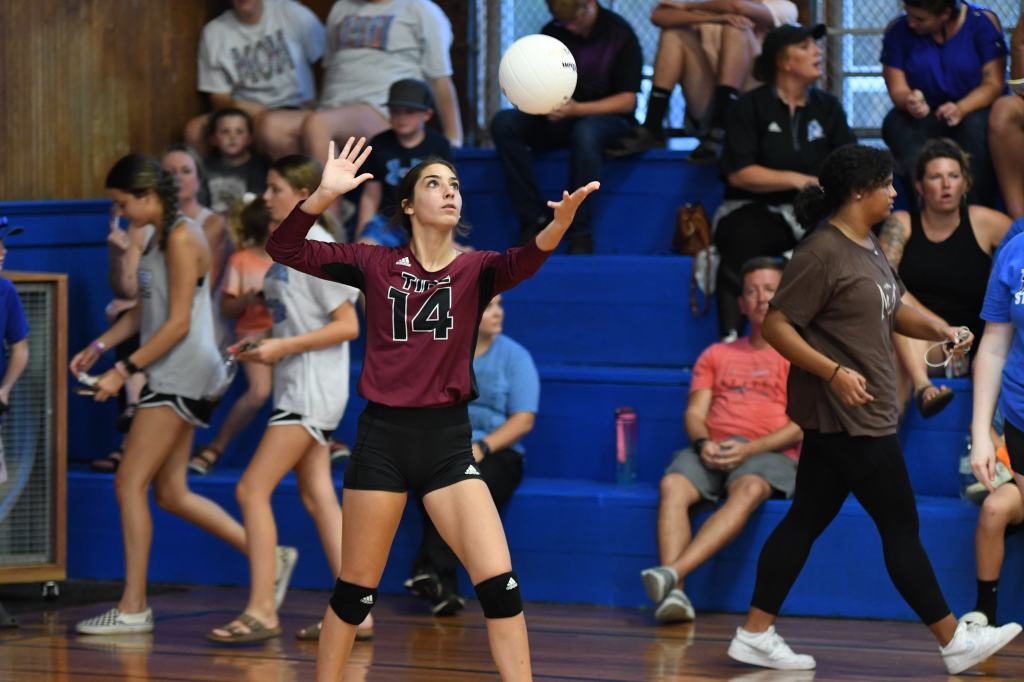 Just like in PRC’s previous game, Head Coach Nicole Brown moved up several JV players to play on varsity. She said their attitude created a really good atmosphere on the bench Monday night. Mid-way through the season, PRC is still searching for their team’s identify and Brown is willing to take a step back and do more evaluating of player roles.

“We’re a new team and I think maybe we have to step back and as players they might want to step back and evaluate their role on the court, rather their leaders or out there just trying to be superstars…[but] superstars don’t win volleyball games,” said Brown.

Picayune on the other hand looked like a superstar team Monday night. They played with control, connected on all cylinders and were on point with passes, sets and serves. Head Coach Courtney Dickens was proud of her Lady Maroon Tide and their emotional control on the road in spite of a noisy student section. Picayune’s shaky start had Dickens a little nervous but her players we able to adjust to the environment and take control. When asked about the team’s maturity, Dickens said, “I do think they’re growing, even just from last year I’ve seen the difference in maturity, so hopefully that can keep getting better.”

PRC rolled with an early 10-4 lead. The majority of PRC’s points came off Picayune’s inability to get the ball over the net. The game got intense when the deficit narrowed to a 13-9 PRC lead. The game was tied at 16-16. Picayune took a two-point lead after back-to-back aces from Reese Sorrells. Picayune went on to out score PRC with 6-2 points behind Annaleigh Robbins’ kill, Brooklyn Wilson’s ace and back-to-back aces by Robbins.

Picayune got hot early, with aces from Barcley Martinez, Rorrells, and kills from Sorreells, Nevaeh Robertson, and Robbins. Those efforts helped put their team up 20-8. Picayune didn’t let up; Sorrells had another kill assisted this time by Wilson putting them up 23-11. PRC’s Jayden Nielson had a big block then killed the ball down for a long awaited score. Picayune closed out the set with two kills, first from Wilson to lead 14-12 then the last score from Robbins.

The game started out tied at 6-6 then 11-11 from long rallies capped off with either kills or errors. Picayune broke into the lead as the game was tied at 12-12 when Robbins had a game changing five aces in a row. Leading 19-12 after adding two more points, PRC’s Nielson had another clutch block and Leigha Trahan had an ace to end PRC’s drought. From there, Picayune picked up two kills and an ace to lead 22-14. The last set ended with a PRC serve error.

Dickens provided a recap of Tuesday’s loss, saying she felt the match was an uphill battle and what brought that about was their flat start and being off with their passes. Set one was lost 25-13 but in set two the Lady Maroon Tide picked things up. Dickens said they looked much better despite losing 25-17. Set three they clinched a 26-24 win. Set four was a close game all the way through but the Maroon Tide couldn’t string another win, they lost 25-23.  Picayune played against an experienced senior team in Pass Christian and Dickens was happy with how the Lady Maroon Tide stood their ground.

“For us to be able to hang with them the way we did, I was proud of them… I was proud that they didn’t give up,” said Dickens.

It was good that Dickens saw her Lady Maroon Tide stand tall and not give in to the deficit because that has been a trend the past few matches. They played hard, didn’t give up but Dickens chalked the loss up to just being out played.

“Overall it wasn’t a bad night for us at all,” she said.

Moving forward, Dickens feels her team just has to get over the hill to see their results pay off. It’s the small things that are keeping them away from stringing together winning sets.

“We just got to knock the wall down, we’re right there… it’s just little things that if we can fix then those wins are going to come.”

A lot of what Dickens wants to fix is better decision making, playing smarter on the court and learning the game a little bit better. She also wants to eliminate how predictable they are on offense. Dickens said she will continue to work with her team about changing things up offensively.

“You got to keep the other team guessing on what you’re going to do,” she said. “Once they start learning the game better then we’re going to get over that hump.”

Picayune’s next game is away, and took place on Thursday at 6:30 against the Stone Tomcats (2-5).