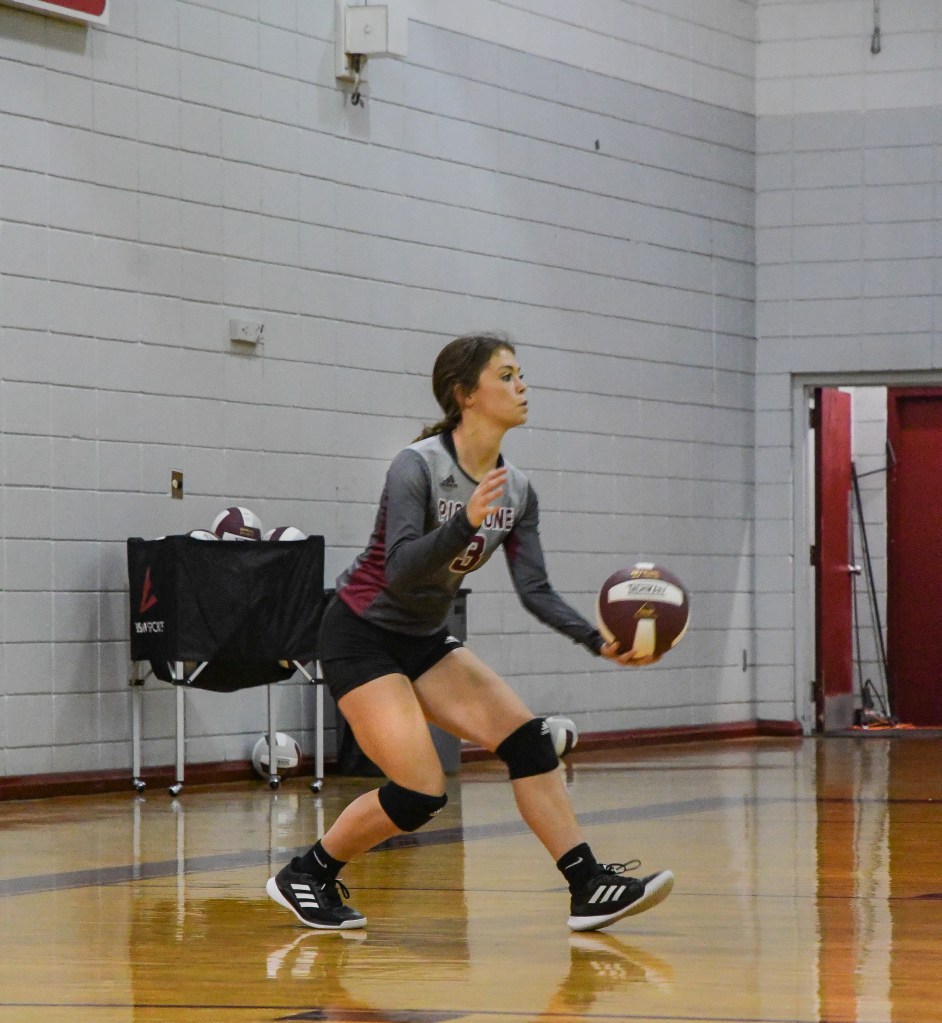 Senior Breauna Sparks serves one of her aces during Picayune’s sweep over Pearl River Central on Thursday.

On Thursday, the Picayune Lady Maroon Tide’s killer serves allowed them to sweep the Pearl River Central Lady Blue Devils. It was also senior night for the Lady Maroon Tide so the team’s two seniors, Amiyah Mark and Breauna Sparks, got special recognition. Both seniors played pivotal roles in Thursdays win. With this win, Picayune’s record moves to 6-14 and the loss pushes the Lady Blue Devils back to 2-15 this season.

PRC led 4-2 after Autumn Craft’s dink, but the Maroon Tide tied the game at 7-7 thanks to Kaigyn Kulas’s assist to Brooklyn Wilson and PRC’s error. From this point on Picayune took control of the set. With the score 10-8 Picayune scored 15 unanswered points. Amazingly, Marks served the entire set and scored 9 aces. Also during that sequence, Wilson and Reese Sorrells combined for an attacking block and Annaleigh Robbins spiked a kill. The rest of the points came off Lady Blue Devils errors.

Kulas picked up two aces to giver the Lady Maroon Tide a 3-1 lead. Then Sparks spiked a kill to lead 4-1. The Lady Blue Devils answered with their own scores, including a kill by Kenzie Helper to tie the game at 4-4. From there the score reached a 7-5 Picayune lead and Picayune scored another 15 unanswered points to lead 22-5. During that sequence Sorrells served four aces, Marks had two kills and Kulas and Wilson had one kill each. Picayune’s scoring run ended after they had an error, giving PRC a point at 22-6. Picayune closed out the set with a Mark kill and ace, then a finishing spike kill by Sorrells.

Tied at 5-5, both teams had their share of errors. Craft served two aces to give the Lady Blue Devils a 7-5 lead. That would be the last time they led as Picayune took a 9-8 lead thanks to a Sparks ace. From there, Picayune scored 11 unanswered points. Sorrells served five aces and Marks had four kills during that sequence. After that was a long rally that ended in PRC’s favor. With the score at 20-9 a Lady Blue Devils error and two aces by Marks gave the Lady Maroon Tide a 23-9 lead. With the game at its final point, 24-13 PRC committed a serving error that gave Picayune the final point.

Next, Picayune will host county rival the Poplarville Lady Hornets on Monday, Oct. 3 at 7:30 p.m.