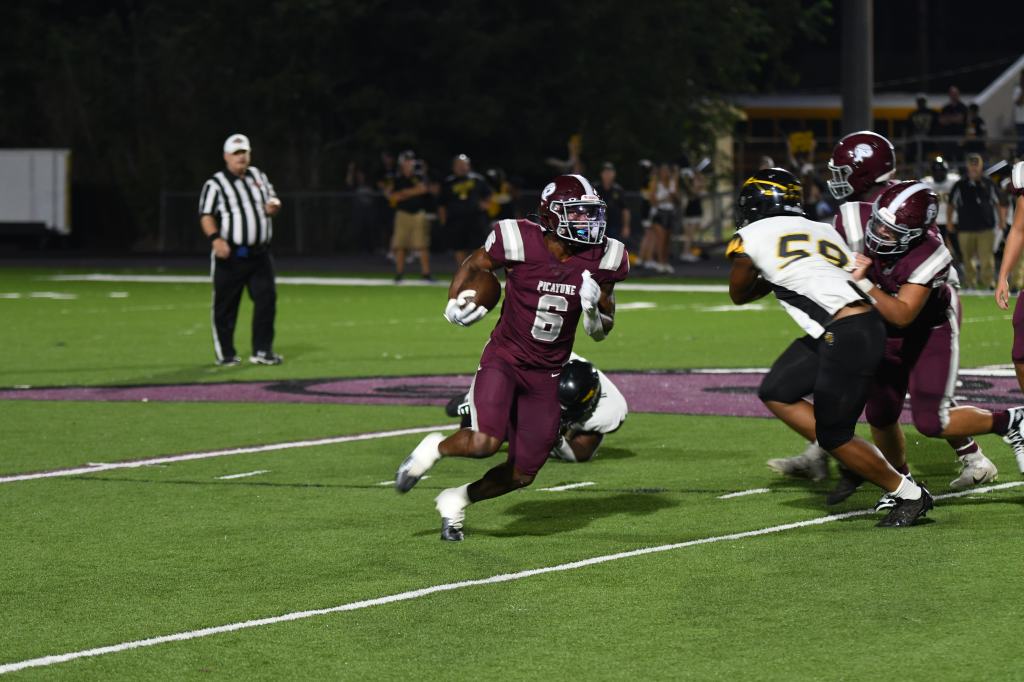 Chris Davis cuts up field in his lone drive that led to his first touchdown of the night and a win over D'Iberville. Photo by David Thornton Jr.

The Picayune Maroon Tide advanced to 4-0 with ease after beating the D’Iberville Warriors 35-7 Friday evening.

The Picayune Maroon Tide received the ball to start the game. They started on the 28-yard line, nine plays later they saw the end zone thanks to Dante Dowdell. He ran it in for a 16-yard touchdown. Morgan Craft hit the PAT and the Maroon Tide led 7-0 with 7:30 to play.

D’Iberville’s following possession was progressive, picking up three first downs. Jamonta Waller put a halt to their drive with a big second down sack putting D’Iberville in third and very long. D’Iberville ended up punting in this drive.

Picayune’s next possession ended in a D’Iberville interception but D’Iberville did nothing with it on offense.

In the second quarter with the clock at 10:00, Picayune drove 75 yards for their second touchdown. It took them five plays and Dowdell capped off the drive with the score.

The next Picayune offensive drive took only two plays. Brady Robertson threw a dime to Broderick Ducre for a big first down gain. Then Darrell Smith carried the ball 25 yards for a Maroon Tide touchdown. Picayune led 21-0 with 4:20 to play before halftime.

Before the half ended D’Iberville had three chances to score on the goal line. The Maroon Tide didn’t budge causing two incomplete passes and Niquis Ratcliff had big tackle for a loss.

Out of the halftime break, Picayune’s defense was a wall forcing another D’Iberville three and out. Picayune’s offense responded with two-plays and a 99-yard touchdown drive. Dowdell ran it 98 yards up the middle and untouched for a Maroon Tide 28-0 lead with 8 minutes to play in the third.

Picayune scored again and for the last time in six plays covering 71 yards when Chris Davis carried the ball from six yards out. Picayune led 35-0 with 2:20 to play.

D’Iberville finally found the end zone in the fourth quarter. Their drive covered 80 yards and was capped off by a six-yard touchdown run.

Along with Picayune’s early interception they had two penalties against them. Those are parts of the game Head Coach Cody Stogner would rather not have.

“Minus the interception we scored every possession we had the football… they (D’Iberville) had a good game plan on keeping the ball away from us and their touchdown, well it is what it is,” said Stogner. “Overall we got up by three scores going into half time and we could of easily came out and laid an egg, but you know what they came out and fought hard for the next 24 minutes,” said Stogner.

Next Picayune will play the Pearl River Central Blue Devils in Carriere on Friday Sept. 23 at 7:30.