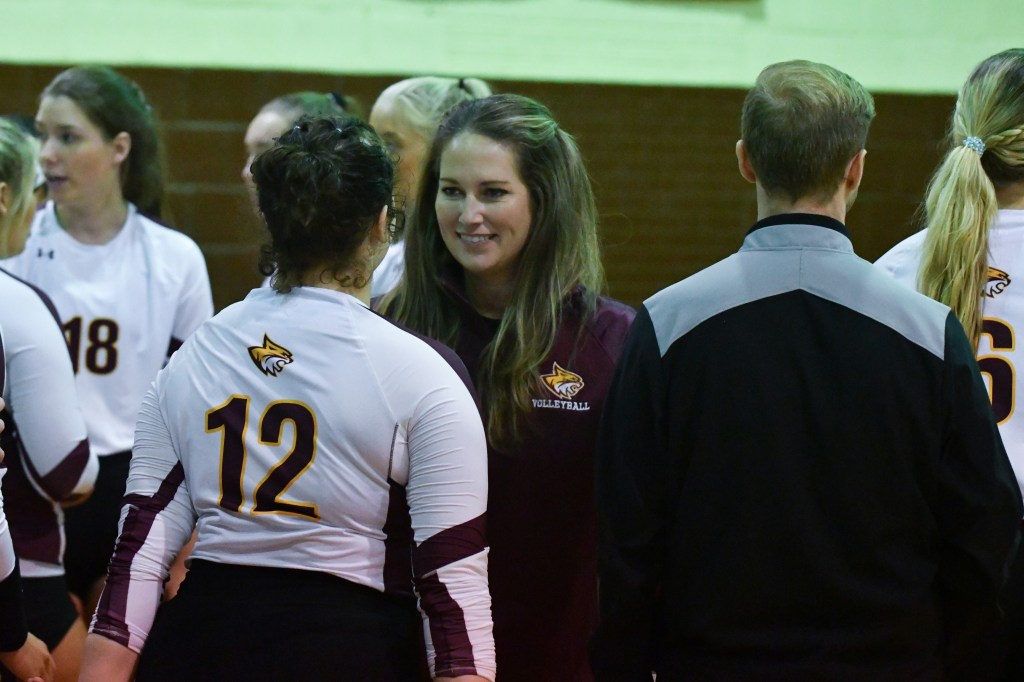 POPLARVILLE, Miss. — The Pearl River volleyball team ended its losing streak Friday, defeating Louisiana Christian 3-1 (15-25, 25-16, 27-25, and 25-14) in an entertaining contest. Despite dropping the first set of the evening, the Wildcats were not fazed and rallied to claim three straight sets.

“LC is typically a fun match for us and this one definitely didn’t disappoint,” Pearl River coach Haley Chatham said. “We overcame so many obstacles that we just hadn’t been able to overcome yet. We moved on the court together, made good adjustments defensively, and our block timing was just right.”

Pearl River (3-4 overall) opened the scoring through a small serving run by Julianah Overstreet (Vancleave) that included an ace.

From there, the teams battled back-and-forth for most of the middle part of set one, eventually finding themselves deadlocked at 10-10.

LCU proceeded to capture the momentum and used it to propel themselves to a 25-16 set one victory.

Pearl River again opened the scoring in set two, but LCU was quick to respond and tie things 1-1 in the early going.

The teams exchanged scores with Pearl River managing to hold on to a slim 4-2 lead.

Bartholomew sparked a small Wildcat run through another kill that was followed shortly after by an Anna Claire Sheffield(Canton; Jackson Academy) service ace to increase the lead to 7-2.

From there, Pearl River captured all momentum and claimed set two 25-16.

Sheffield opened the scoring for Pearl River in set three after recording a block and a kill.

LCU was not fazed as they captured early momentum and managed to push things in their favor 5-3.

Pearl River responded by going on a run of their own that included two more Sheffield aces, a Jolee Gibson (Brandon) ace, and an Overstreet block, giving them a 9-6 lead.

The teams began to exchange scores as neither team could find the advantage working all the way to a 24-24 tie. Pearl River proved to be resilient and clawed its way to a 27-25 victory.

Pearl River exploded out of the gate in set four taking a 5-1 lead. The early run included kills by Smith, Lillie Franks(Ocean Springs), Sheffield, and Bartholomew.

The teams eventually found themselves at a 6-6 deadlock, but Gibson provided a spark for Pearl River through her serving to give them the lead 8-6.

After a quick LCU score, Pearl River went on yet another run that was powered by kills from Overstreet and Smith to open things up 13-9.

Pearl River never looked back, coasting to a 25-14 victory to win the match.

Sheffield was a force in the middle for Pearl River, tallying four blocks on the evening. She also had two kills and four service aces.

“AC is making reads and her blocks were a huge part of our success tonight,” Chatham said.

Bartholomew finished with seven kills and added two service aces of her own.

“Natalie continues to be a steady blend of force and power for us and is someone we can continually count on,” Chatham said.

Smith continued to be a force for the Wildcats, tallying five kills.

“We were able to move Sammie to the outside and it has unleashed her,” Chatham said. “She has gained some much-deserved confidence and we couldn’t be prouder of her for that.”

Chatham also talked about the play of setters Overstreet and Gibson as well as defensive specialist Allison Carpenter(Ocean Springs).

“Julianah and Jolee did an outstanding job keeping our attackers away from their best blocks,” she said. “Allison came up big time for us defensively. She passed well, dug up some hard hits and served lights-out.”

The Wildcats hit the road on Wednesday against Itawamba. The match is set to get underway at 5 p.m. and will be livestreamed at LetsGoICCTV.com