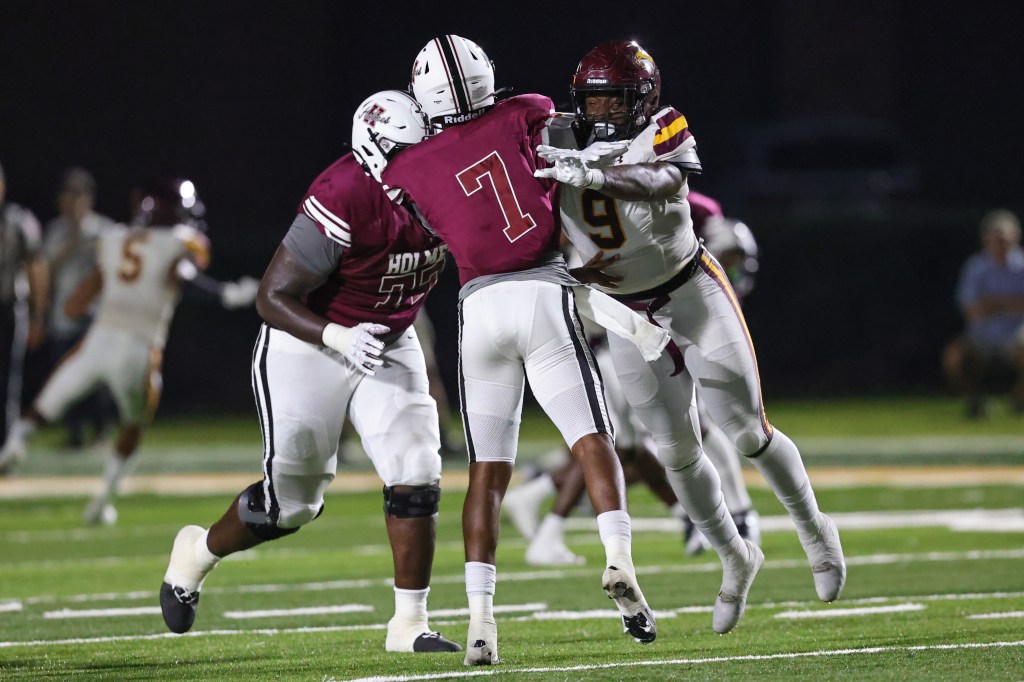 BOONEVILLE, Miss. — The Pearl River football team showed that it had toughness inside its DNA Thursday night at Tiger Stadium against Northeast. The Wildcat defensive unit put on a remarkable performance to propel them to a 20-13 victory over the Tigers.

With the victory, Pearl River moves to 2-0 for the first time since the 2015 season and extends its all-time record against Northeast to 33-6.

“You can’t say enough about Coach (Ty) Trahan, Coach (Ta’Ron) Sims and Coach (Lorenzo) Breland. I don’t know that I’ve ever been so proud of a group of coaches and kids,” Pearl River coach Seth Smith said. “To the outside, no one thought that we could be 2-0. Everyone thought we were just little Pearl River.

“These kids are battling and fighting. What you got to watch tonight is in our DNA. We may not be the biggest or the fastest, but we are going to fight for four quarters. That was something they did. I’m so thankful that I get an opportunity to coach these kids.”

Despite entering the midway point trailing 6-0, Smith’s message to the team at halftime was to not stress.

“The biggest thing was not panicking. We just have to stay calm and know it’s a four-quarter game. These games take forever,” he said. “We told them to keep being them offensively. Northeast is a great defensive team. The best thing about tonight was that it showed that we can win pretty, and we can ugly. Either way, we find a way to win.”

The first possession of the night for Pearl River (2-0 overall) looked to be a good one. The Wildcats ran five quick plays to make their way up to their own 49-yard line, but the drive fizzled out. A good punt from Corblin McGinn (Biloxi; D’Iberville) pinned the Tigers inside their 20-yard line.

On its first drive, Northeast (1-1) made its way into Pearl River territory and eventually had a first-and-goal opportunity at the Wildcat 9-yard line. However, three great downs defensively resulted in a 22-yard field goal for the Tigers.

NEMCC doubled its advantage with 1:06 remaining in the first quarter of play, hitting a 37-yard field goal to take a 6-0 lead.

Pearl River drained five minutes off the clock to start the second quarter, using an 18-play drive to make its way down to the Northeast 2-yard line. Unfortunately for the Wildcats, the Tiger defense held strong and forced a turnover on downs.

Two NEMCC drives later, the Tigers had an opportunity to pad its lead, opting for a 31-yard field goal attempt. Great pressure from the Wildcat special teamers forced the kicker to pull his kick to the left side of the field goal post, turning possession over to the Wildcats.

After a PRCC turnover, the Wildcat defense continued to shine, keeping the Tigers out of the end zone and forcing yet another field goal attempt. As time expired, the Tiger kicker attempted a 44-yard field goal but was unable to put it through the uprights. NEMCC entered the break with a 6-0 lead.

The defense came out firing on all cylinders in the second half of the night.

On the fourth play of the NEMCC’s first drive, the Tiger quarterback passed off to his running back who ran a few yards up the sideline. He was met by redshirt freshman Eli Hackbarth (Birmingham, Ala.; Oak Mountain) who ripped the ball out of his hands for a fumble. Justin Jefferson (Memphis, Tenn.; Bartlett) rushed over to the loose ball and jumped on it to give the Wildcats possession at the NEMCC 40-yard line with 12:34 remaining on the clock.

Nick Milsap (Raleigh; Oak Grove) was the bell cow on the drive, running the ball three times in the short field to move Pearl River within striking distance. On his fourth carry, the sophomore powered his way into the end zone for a 5-yard score. The touchdown tied things up at 6-6, but the PAT attempt was no good.

After a pair of quick drives for the Tigers and Wildcats, Bryan Whitehead II (Bartlett, Tenn.) began to make his presence known. The Tigers had a third down and eight yards to go opportunity but heavy pressure from the defensive lineman forced the quarterback to toss the ball out of pounds.

PRCC took over at the 50-yard line after a shanked punt by the NEMCC punter and the Wildcats proceeded to go on a 14-play touchdown drive that carried over into the fourth quarter to take a 13-6 advantage. After several short rushing and passing plays, the Wildcats finally capped off the drive through the air. Jordan Foushee (Bay St. Louis; Hancock) ran a hitch route, losing his defender in the process. Lawson Pratt (Tuscaloosa, Ala.; American Christian Academy) quickly tossed it over to the receiver who carried it straight into the end zone for the 9-yard score.

A long NEMCC drive milked the clock down to 4:54 left in the fourth quarter and the Tigers evened up the score 13-13 with an 18-yard touchdown pass.

The Tigers took over possession again with just over three minutes left in the game, looking like they had a good chance to drive down the field for an attempt to win it, but that’s when Whitehead II became unstoppable.

On the first down play, he blew past the Tiger offensive lineman and wrapped up the quarterback for a sack. The very next play was easily the play of the year so far for the Wildcats. Whitehead II catapulted off the line of scrimmage, ran around the Tiger offensive lineman, plucked the ball out of the hands of the unsuspecting quarterback and carried it 20 yards for a touchdown. The remarkable strip-and-score gave the Wildcats a 20-13 lead with 2:23 remaining on the clock.

After the kickoff, the Pearl River defense continued to shine, forcing NEMCC to third down with eight yards to go. That’s when Whitehead II picked up his third sack in just five defensive plays, slinging the offensive lineman away before turning back upfield and knocking the Tiger signal-caller to the ground.

Pearl River got possession back and a few kneel downs closed out the 20-13 victory.

Milsap led the rushing attack, finishing with 47 yards and a touchdown on 12 carries.

“We were just really prepared,” Whitehead II said. “We knew we had to stop the run and eventually they’d have to start passing the ball. We were able to execute on the pass rush late in the fourth quarter. It was funny because right before the drive, I told my teammates that I was going for the strip sack. Once I got to the quarterback, I had the opportunity to take it away from him and I capitalized on it.”

Jefferson led the team in tackles with 10, including one TFL. He also broke up a pass and recovered a fumble. Hackbarth tallied seven tackles and 0.5 TFLs. He finished with a pass breakup and a forced fumble.

The Wildcats return to action next week as reigning MACCC Champion Northwest comes to Dobie Holden Stadium. Kickoff is set for 7 p.m.

radio broadcast is also available at WRJWRadio.com and by downloading the WRJW app.