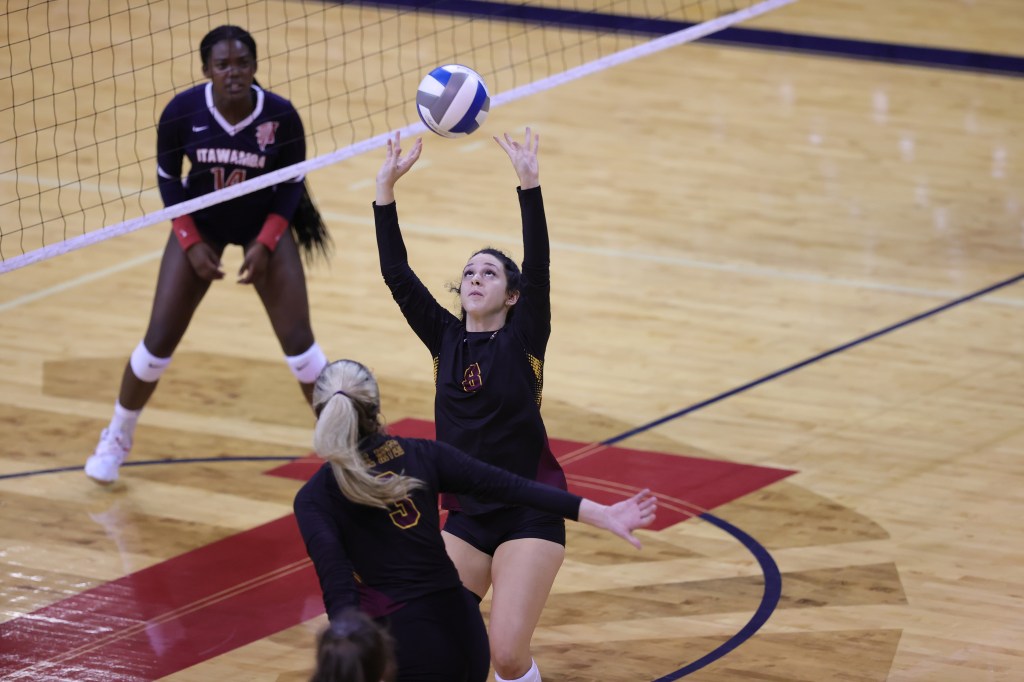 FULTON, Miss. — The Pearl River volleyball team started another road trip Wednesday as they traveled to Fulton to take on Itawamba. The Wildcats were never able to find their footing despite taking early leads in each set, falling 3-0 (16-25, 19-25, and 17-25).

“Errors killed us tonight. Every time we found a little momentum, we’d commit one and stop it dead in its tracks.” Pearl River coach Haley Chatham said, “Good news is we can take what we learned tonight and use it to help us prepare for when we face them again this weekend, but credit to ICC and their crowd for a great atmosphere tonight.”

Pearl River (3-5 overall) opened the scoring in set one through a booming Julianah Overstreet (Vancleave) block.

Itawamba (7-0) was not fazed and claimed back-to-back points to take the lead 2-1.

From there, the Indians went on a small run which saw them claim an 8-4 lead, but Pearl River responded through a service run by Jolee Gibson (Brandon) which included two service aces to cut the deficit to 8-7.

The teams continued to battle with each other with Pearl River keeping themselves in the match thanks to kills by Overstreet and Sammie Smith (Biloxi; D’Iberville). The score eventually settled at 13-10 in favor of ICC.

The Indians established control from that point forward and coasted to a 25-16 set one victory.

The Wildcats again opened the scoring in set two, this time through an Overstreet service ace.

After a quick ICC response, Pearl River reclaimed the lead through a thundering kill from Sheffield that was followed by a Hannah Burks (Ocean Springs; Vancleave) ace.

After that, both teams proceeded to trade scores for most of set two with the scoring settling at 12-8 in favor of ICC.

Shortly thereafter, ICC stretched its lead to 23-13, but Pearl River was not fazed and brought the score to within five at 24-19.

PRCC continued the trend of scoring first, this time via a Natalie Bartholomew (Brandon) kill. The Indians fought back and opened up a comfortable 7-2 lead.

The Wildcats did not falter and drew within two, courtesy of three kills and a block by Bartholomew to make the score 8-6.

The teams again began to exchange scores with ICC managing to capture late momentum to propel them to a 25-17 victory to finish the sweep.

Bartholomew finished the match with eight kills and a block.

Overstreet put up three kills of her own and also pitched in with two blocks.

Gibson and Hannah French gave the Wildcats a boost defensively when they were called into action and helped pass the ball around and set up Pearl River hitters in a good position.

“Jolee and Hannah shined tonight,” Chatham said. “They passed well, set up hitters in a good position, and provided a great source of defense.”

The Wildcats keep the road trip going Thursday against Northwest and Freed-Hardeman. The matches are set to begin at 1 p.m. and will be livestreamed at NWCCRangers.com/watch.