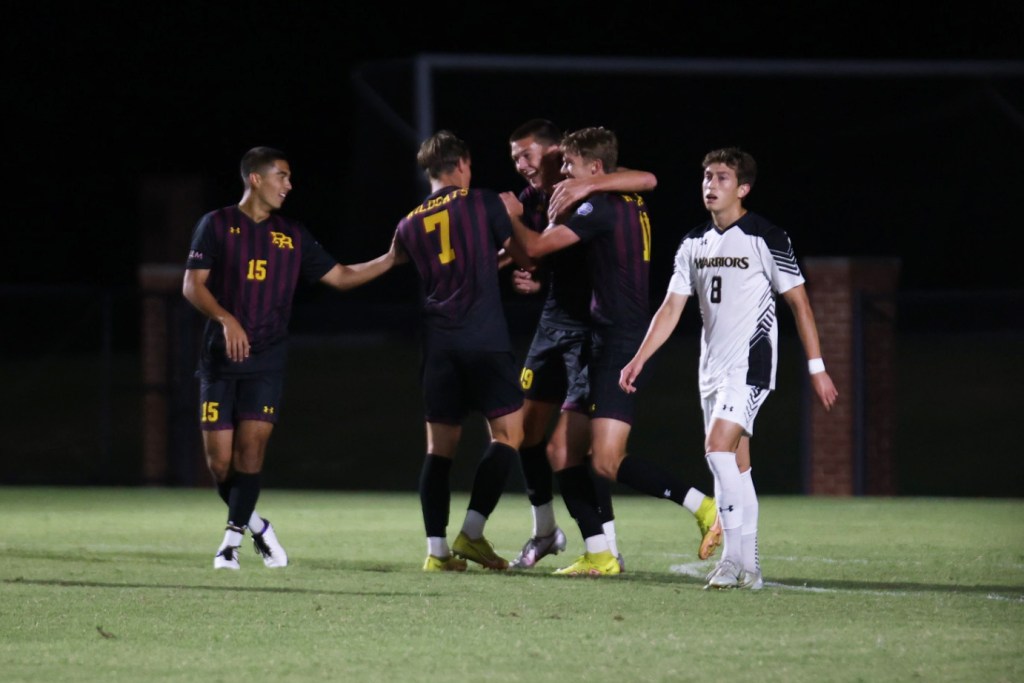 Luke Hopkins (Clinton) celebrates with teammates after knocking in a goal in PRCC's 5-1 victory at East Central. The freshman finished with two goals and an assist in the contest. (ECCC Sports Information)

DECATUR, Miss. — The No. 9 Pearl River men’s soccer team picked up its second straight lopsided victory Tuesday night as the Wildcats traveled to East Central and defeated the Warriors 5-1.

“We were threatening the entire time,” head coach Drew Gallant said. “They cleared several off the line and we had some chances that we couldn’t tap in. We had a lot of contribution coming from all over the field and we were able to get minutes to almost everyone tonight. It was a great performance.”

Pearl River (6-2 overall; 3-1 MACCC) was off and running from the jump as a great attacking chance was developed in the very first minute of the contest. Christopher Dommer (Copenhagen, Denmark.) saw an open lane and delivered a great ball to Alex Emery (Gulfport; West Harrison). Emery tracked the ball down, but his shot attempt was sent way wide of the net for an East Central (2-3; 2-2) goal kick.

The Wildcats got on the board for the first time in just the 7th minute. PRCC earned a free kick and Dommer stepped up to the spot. The midfielder smacked a shot on goal that was saved by the ECCC keeper, but former Mississippi Gatorade Player of the Year Luke Hopkins (Clinton) was there to knock home the deflection and make it a 1-0 game.

It only took eight more minutes for Hopkins to get on the scoresheet a second time. A Warrior defender tried to clear a cross but instead tapped it into the air. Hopkins took a step to his left and smacked it into the left side of the net on the volley.

Andre Nicholson (Kingston, Jamaica.; Clarendon College) made the score 3-0 in the 40th minute, picking up his third goal of the 2022 campaign. While Hopkins did not receive an assist on the goal, his movement off-ball created the space for Nicholson who drove in and smacked home the ball.

The Warriors sliced into the lead in the 47th minute. A mistake along the Wildcat backline allowed ECCC to have an easy one-versus-one opportunity with the PRCC keeper. The East Central forward poked it into the net to make the score 3-1.

Emery pushed the Pearl River lead back out to three goals at 4-1 in the 71st minute. The ECCC keeper had come out from his spot to try to block a shot opportunity from Hopkins. Instead of going for goal, Hopkins slid a pass along the ground to Emery who backheeled the ball into the net.

Emery added a second goal in the 77th minute. Durron Myers (Gulfport) took a shot from the left side of the box that was knocked down by the Warrior goalkeeper. Emery followed up on the deflection and placed it into the back of the net to extend the lead to 5-1.

PRCC held on to the 5-1 advantage to seal the win.

After the match, Gallant named Hopkins Man of the Match for his two-goal, one assist performance.

“Luke had an amazing night tonight. He’s a special player,” he said. “He’s really coming along as a freshman. He’s a big guy and he moves well. The goals he scored weren’t pretty, but they showed how much hard work that he puts in to get the goals.”

“Jason got a start tonight and got some minutes under his belt. I think that he had a great night. Harper did a great job at the back of the formation as well. That was a center back pairing that we hadn’t used this year, so we were proud of the way they played back there,”

The Wildcats travel to Summit Saturday to take on Southwest. The match against the Bears is set to kick off at 3 p.m. and will be livestreamed at Go.SMCCBears.TV.