No. 7 Pearl River battles back to take down Meridian 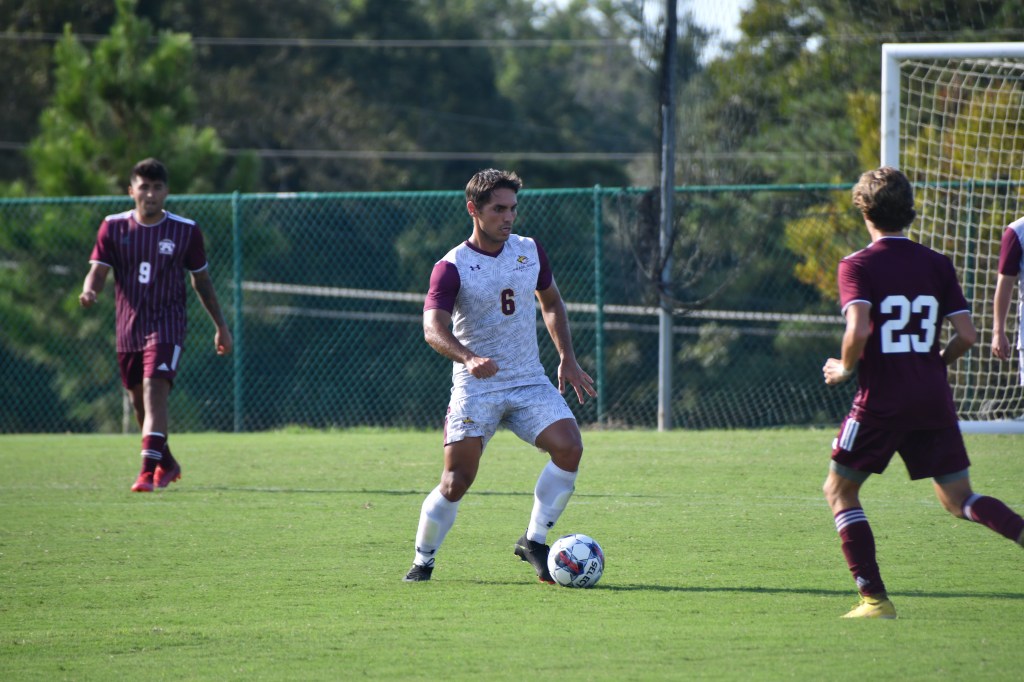 POPLARVILLE, Miss. — The No. 7 Pearl River men’s soccer team went down early in its conference opener against Meridian but turned in an incredible performance to defeat the Eagles 4-1.

“It’s huge to open up with a conference win,” head coach Drew Gallant said. “Meridian is coached very well. They always give us fits. They do a very good job defensively and are very organized. I expect them to fight for playoffs and we may see them again.”

Meridian (1-4-1 overall; 0-1) opened the scoring in just the sixth minute on one of the more impressive goals of the season. The Eagles were awarded a corner kick and made the most of the opportunity. The MCC played stepped forwarded and booted the ball toward the goal but instead of finding a teammate, the ball curved into the top right corner of the net to give the Eagles an early 1-0 advantage.

It didn’t take long for Pearl River (4-1; 1-0) to equalize as six minutes later, Christopher Dommer (Rungsted, Denmark) got on the scoresheet off a freekick. His shot from deep was deflected by the Meridian wall and the bounce of the ball shot into the right side of the net.

Julio Gruba (Curitiba, Brazil) put PRCC on top in the 34th minute of the night. The Wildcats passed the ball around before finding Gruba all alone three yards outside of the box. The midfielder received a pass from Dommer and on the first touch lofted a ball into the top left corner of the net to give PRCC a 2-1 advantage.

In the 61st minute, Alex Emery (Gulfport; West Harrison) was taken down inside of the box and earned a penalty kick opportunity, The Wildcats’ leading goal scorer on the season made the most of the chance, driving the ball into the left corner to extend the lead to 3-1. The goal was Emery’s fifth of the season.

The final goal of the night for Pearl River came off the foot of Dommer. The midfielder worked his way up the field before being fed a pass from Luke Hopkins (Clinton). As he dashed into the box and the keeper came rushing out, Dommer chipped a ball over his head and into the net to push the Wildcat lead out to 4-1.

The score held for Pearl River as they claimed their first conference game of the season.

Pearl River returns to the pitch Tuesday for a top-10 matchup with rival Jones College. The “Cat Fight” is set to get underway at 7 p.m. at PRCC Soccer Complex.

“It’s always an incredible battle with Jones,” Gallant said. “Both of us could be winless and it would still be a huge battle. That’s how it goes when you live so close to another team, and you recruit the same players and areas. They’re one of the best teams in the conference.”