No. 6 EMCC uses dominant second half to open season with 38-0 home shutout over Co-Lin 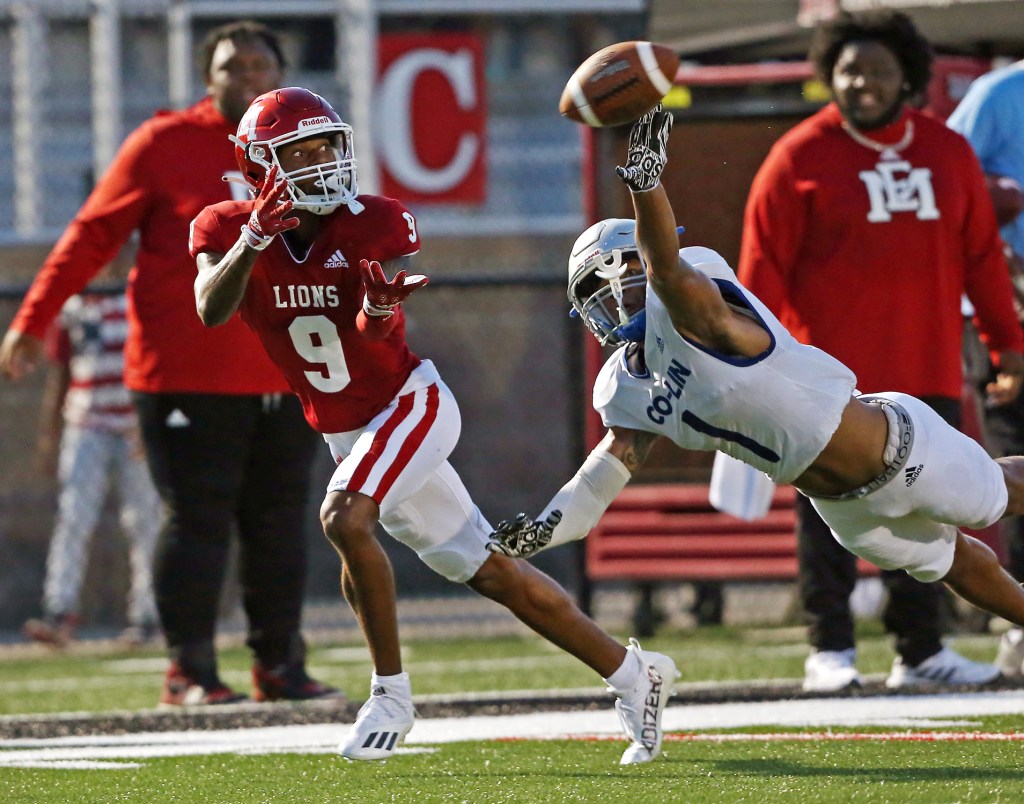 SCOOBA – The sixth-ranked Lions of East Mississippi Community College broke open a tight 3-0 contest at the half by scoring five second-half touchdowns on the way to cruising to a 38-0 home shutout victory over Copiah-Lincoln during Thursday’s season opener played at EMCC’s Sullivan-Windham Field.

Following a fairly uneventful opening half of action to kick off the new season, the home-standing Lions produced touchdowns on five of their first six second-half possessions. After being held to 105 yards of total offense by the Wolf Pack in the first half, EMCC’s well-balanced offensive attack hummed to the tune of 276 yards following the break with 139 yards on the ground and 137 more through the air.

On defense, the Lions cut Co-Lin’s total offense numbers from 193 total yards in the opening half to just 93 during their dominant second half of play. With three pass interceptions on the night and making eight stops behind the line of scrimmage with four quarterback sacks, EMCC registered the program’s 24th shutout during the Buddy Stephens coaching era that dates back to the 2008 season.

On the heels of a first half that basically only featured a 30-yard field goal by EMCC freshman Cole Arthur during the final minute of play in the opening quarter, the Lions’ defense set the tone for the remainder of the contest coming out of the break by quickly forcing a three-and-out possession. A quarterback sack rush headed by defensive tackle Elijah Davis fueled the momentum for the Lions to go 53 yards on six plays in two minutes. Amariyon Howard’s 8-yard touchdown run at the 11:37 mark made it a 10-0 game.

EMCC’s defensive secondary then helped set up the next score when Tulane transfer Reggie Neely picked off DeVon Tott’s pass attempt. The resulting seven-play, 59-yard scoring drive was capped by Memphis transfer quarterback Peter Parrish keeping the ball around left end after faking the handoff up the middle to Howard. The 1-yard bootleg increased the Lions’ lead to 17-0.

The Wolf Pack’s best chance at getting on the board in the opener, other than a touchdown being called back in the first half due to a Co-Lin penalty, came late in the third quarter. However, Dylan Wasson’s 21-yard field goal try missed left.

The Lions continued their dominance during the final quarter scoring three more touchdowns in as many possessions. The 21-point fourth quarter got started with Parrish connecting with Josh Aka over the middle for a 43-yard catch and run to the end zone. The game’s first passing score made it 24-0 with 14:16 left in the contest.

Three minutes later, EMCC’s ball-hawking secondary came up with the unit’s third interception of the evening when Jadden Matthews stepped in front of a would-be Co-Lin receiver for his first career collegiate pick. Four plays – all for double-digit yardage – and 55 yards later, Howard scored from 20 yards out for his second rushing touchdown of the game to increase the Lions’ lead to 31-0 with 11:14 remaining.

In his EMCC playing debut, Parrish threw for 180 yards and a touchdown on 22-of-30 passing while also running the ball 11 times for 44 net rushing yards and a score.

Aka, from Starkville, and North Panola High School product Carl Robinson earned game receiving honors for the winners with five catches each. Nine EMCC receivers had at least one grab in the contest.

With four players each rushing for 35 yards or more during the contest, Howard and Parrish led the way with 47 and 44 yards, respectively, on the ground. Benjamin’s 39 rushing yards in his collegiate debut were followed by former Alabama signee and Philadelphia standout Kadarius Calloway’s 35 yards.

The 1-0 EMCC Lions will now have three consecutive contests away from home beginning with Thursday’s (Sept. 8) inter-divisional power matchup against the 11th-ranked Jones College Bobcats in Ellisville. Kickoff is scheduled for 7 p.m. at Bobcat Stadium at Sim Cooley Field.