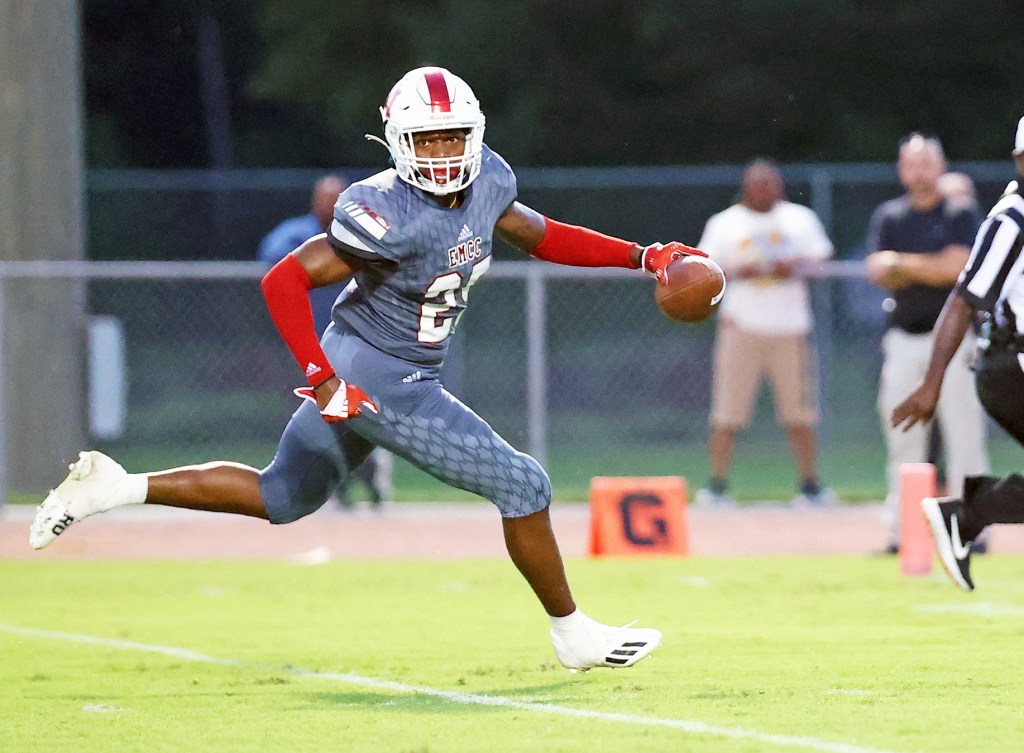 For the second straight week to open the 2022 season, EMCC got off to a slow by not producing an offensive touchdown during the first half of play. Unlike last week when they responded with 35 second-half points to build on a narrow 3-0 halftime lead during their 38-0 home shutout win over Copiah-Lincoln, the Lions weren’t able to quite overcome a 29-7 deficit to the Bobcats at the break.

The game’s scoring began when Yohan Thompson’s 27-yard field goal at the 8:05 mark of the opening quarter capped a 12-play, 60-yard drive that gave Jones a 3-0 lead.

The special teams units for both teams then paid major dividends for the contest’s first pair of touchdowns during a 20-second stretch on the game clock. Following a sack of Jones quarterback Alan Follis by EMCC’s Elijah Davis, the Lions got on the scoreboard at the 3:22 mark after Jacob Partridge’s punt block was recovered and scored by teammate Jamori Evans from 13 yards out.

The Lions’ lone lead of the night vanished quickly, however, over the game’s next two plays. EMCC’s ensuing kickoff by Cole Arthur was returned 75 yards by Trent Howell to the 18-yard line, setting up Robert Henry’s first of three touchdown runs on the next play from scrimmage. Thompson’s made PAT put Jones back on top (10-7) for good with 3:02 remaining in the opening quarter.

Special teams play set the stage for a three-touchdown second quarter by the home-standing Bobcats. On the first play of the quarter, Jamison Kelly recovered an EMCC punt blocked by Andre Mack at the Lions’ 17-yard line. Henry then ran for eight and nine yards on two carries to extend JC’s lead to 16-7 after the extra-point attempt was blocked by EMCC’s Ronnie Randle Jr.

Following a nine-play EMCC drive that stalled at the Jones 37-yard line, the Bobcats took to the air to increase their lead to 22-7 on Follis’ 22-yard touchdown toss to Kendall Coleman midway through the quarter.

On the game’s next possession, Jones’ defense stepped up to further lengthen the lead. Peter Parrish’s pass was intercepted by the Bobcats’ Travor Randle and returned 36 yards for the score to make it a 29-7 contest at the 6:46 mark.

Jones had an opportunity to tack on another score on its final drive of the half, but Brody Pierce’s 23-yard field goal attempt hit the right upright.

After the halftime break for the second straight week, EMCC’s defensive unit provided some major spark for the offense. On the opening drive of the second half, an 8-yard quarterback sack and resulting fumble caused by Lions linebacker Steven Cattledge Jr. was recovered by Devonyal Lofton at the Jones 14-yard line. Five plays later, Amariyon Howard punched it in from a yard out at the 12:30 mark for EMCC’s first offensive score of the game that cut the deficit to 29-14.

Three minutes later on the game clock, the visitors made it a one-possession game after Laurence Sullivan Jr.’s 51-yard interception return of an errant Follis pass was followed the next play by Ethan Conner’s 2-yard keeper. Cole Arthur’s subsequent PAT kick made it a 29-21 contest with 9:31 remaining in the third quarter.

With the game’s momentum seemingly switching sides, at least for the moment, Jones’ Henry – the reigning MACCC Offensive Player of the Week – broke free on a third-and-14 play for a 69-yard touchdown run down the right sideline. Just like that and despite their third failed PAT try of the game, the Bobcats moved ahead, 35-21, with 8:07 left in the third quarter.

To their credit, the Lions responded by later going on a 13-play, 73-yard scoring drive that took 4:26 off the game clock. Howard’s 3-yard scoring run – his second rushing touchdown of the game and fourth of the young season – at the 13:45 mark of the fourth quarter once again made it a one-possession contest at 35-28.

After the two teams traded punts, the Bobcats struck again through the air when DJ Smith connected with Ashton Nickelberry on a 55-yard touchdown toss at the 9:30 mark that ended up being the game’s final scoring play.

For the remainder of the contest, Jones primarily stayed on the ground with its running game by using up 4:16 on the game clock during an eight-play possession. In contrast, the Lions tried to play catch-up through the air and came up empty when a nine-play, 51-yard drive ended with Eli Anderson getting picked off by Lardarius Webb at the Jones 20-yard line.

Statistically for the game, Jones outgained EMCC, 394-296, in total offense yardage and in first downs, 22-16.

For the second straight week to open the season, Henry was Jones College’s primary offensive weapon by churning out 219 rushing yards and three touchdowns on 31 attempts.

Coach Buddy Stephens’ 1-1 EMCC Lions will play their second of three consecutive games away from home by kicking off MACCC North Division play with a Thursday contest (Sept. 15) against Holmes Community College. Kickoff is set for 6:30 p.m. at Ridgeland High School. The Bulldogs are guided by first-year head coach Marcus Wood, who played football at EMCC as well as having previously served as an assistant football coach and college administrator on the Scooba campus.