No. 16 Pearl River battles to draw with No. 5 Jones College 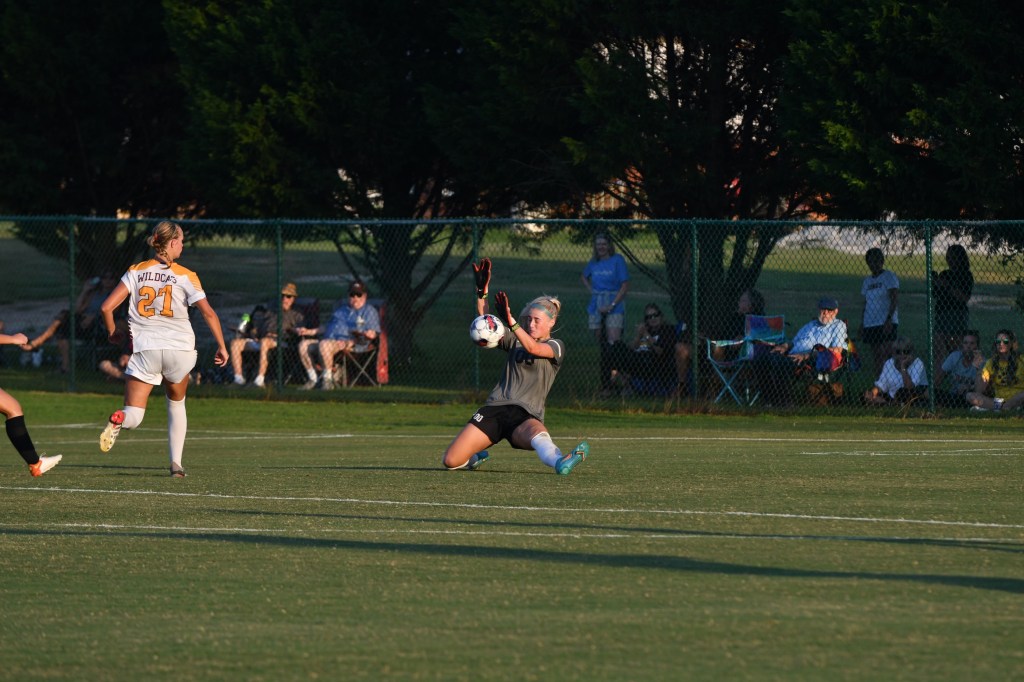 Aníta Guðmundsdóttir(Kópavogur, Iceland.; Flensborg) dashes out and makes a huge deflection in No. 16 Pearl River's 2-2 draw with No. 5 Jones College.

POPLARVILLE, Miss. — The heavy-weight matchup between the No. 16 Pearl River women’s soccer team and No. 5 Jones College Tuesday proved to be the battle that everyone expected. The “Cat Fight” ended in a 2-2 draw after 110 minutes of action.

“Jones is always going to be a quality team,” head coach Henrik Madsen said. “We had a great first half to go up by two goals. Jones has a lot of character, so I knew they weren’t gonna try to climb back into it. They took it to us in the second half.

“I’m super proud. It takes a lot of effort to play 110 minutes at this pace. There was no letup. Jones was still going, and we were trying to keep up. The girls did an amazing job.”

HOW IT HAPPENED
Jones College (4-0-1 overall; 1-0-1 MACCC) nearly got on the board in the 18th minute of the contest when a Bobcat midfielder uncorked a shot from deep. The ball flew just over the top of the crossbar and out of bounds for a Pearl River (6-0-1; 1-0-1) goal kick.

Five minutes later in the 22nd minute, the Wildcats struck first. A ball played into the box by Sydney Spataro (Long Beach) was found by Maddie Cuevas (Picayune; Hancock) who slotted it home for the first goal of her Wildcat career and a 1-0 PRCC lead.

It didn’t take long at all for Pearl River to double its advantage as Emma Godfrey (Pascagoula; Resurrection Catholic) got on the scoresheet. Cuevas pushed a ball up to the left side of the pitch before slowing down to survey the field. She quickly sent a cross in and Godfrey flew in and forcefully headed it into the back of the net to make it 2-0.

Jones almost got on the board in the 35th minute but was unable to find the final pass and PRCC eventually entered the midway point with the lead.

A huge play from Aníta Guðmundsdóttir (Kópavogur, Iceland.; Flensborg) kept the Bobcats off the board in the 56th minute. Jones had a one-versus-one opportunity but the goalkeeper rushed out and made a big deflection to end the attacking chance.

PRCC had a good chance to get on the board in the 59th minute as Godfrey made a few dribble moves before finding a wide-open Alexis Cochran (Hurley; East Central). Cochran’s shot was right at the JC keeper who made an easy save.

The Bobcats earned a penalty kick in the 64th minute and made the most of it, sliding a ball into the back of the net to cut PRCC’s lead in half, 2-1.

The Wildcats had a couple more chances but could not build on their lead and then Jones College tied things up in the 75th minute.

The teams continued to battle down the stretch before finishing regulation deadlocked at 2-2.

Cochran served a great ball into the box in the 97th minute but Pearl River could not find the ball on its header attempts.

The Wildcats had another golden scoring opportunity in the 106th minute as Jess Harrison (Gulfport; St. Patrick) dribbled around the Jones goalkeeper but didn’t get turned enough on her shot, sending it out of bounds for a goal kick.

Neither team got on the scoresheet in the final four minutes of the night, ending in a 2-2 draw.

Pearl River goes back on the road Friday as it battles with No. 10 Northwest. The matchup will get underway at 1 p.m. and can be watched at NWCCRangers.com/watch.