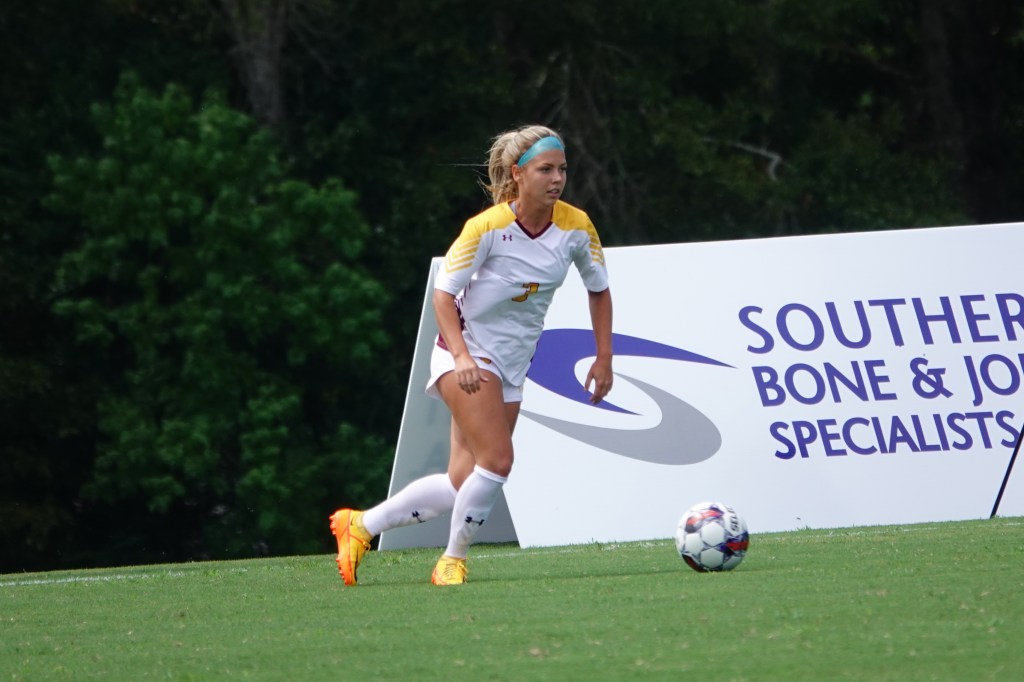 Bre Stansberry (Lucedale; George County) picked up the lone goal of the night for the Wildcats, lacing a ball into the back of the net in the 79th minute against No. 16 East Central.

DECATUR, Miss. — In its third consecutive ranked matchup, the No. 15 Pearl River women’s soccer team hit the road Tuesday to knock off No. 16 East Central 1-0.

“It’s definitely a good day. It’s always tough to play against East Central and we were able to come out with a win,” Pearl River coach Henrik Madsen said. “Last week was a tough week playing a pair of top-10 teams. Tonight’s result was a good way to rebound for us. I think the girls battled. It wasn’t our best game, but they battled through it and made it happen.”

Pearl River (7-1-1 overall; 2-1-1 MACCC) had a narrow miss in the 23rd minute of the evening. Jess Harrison (Gulfport; St. Patrick) tracked down a ball just inside of the box and unleashed a shot, but the East Central (3-3-2; 0-2-2) goalkeeper stepped to her left and caught it for the save.

In the 27th minute, a Wildcat midfielder played an incredible ball up the pitch for the sprinting Ann Maris Ragan (Flowood; Hartfield Academy). The striker got a touch on the ball but was unable to control it before it went out of bounds.

The Warriors had an opportunity to get on the scoresheet in the 33rd minute as a ball was crossed into the box for an ECCC forward. Pearl River quickly swarmed the forward and cleared the ball from danger.

It looked like the Wildcats had taken the lead in the 56th minute. Harrison was fed a pass inside of the box and banged it off the top of the crossbar. Emma Godfrey (Pascagoula; Resurrection Catholic) tried to head it home but it deflected out to Harrison again. This time the striker nailed it into the back of the net, but the offside flag was raised to end the threat.

East Central had one of its better opportunities of the game in the 65th minute but reigning MACCC Goalkeeper of the Week Aníta Guðmundsdóttir (Kópavogur, Iceland.; Flensborg) dove to her right and knocked away a shot attempt to keep it scoreless.

Pearl River finally broke through in the 79th minute of the match thanks to a great strike from Bre Stansberry (Lucedale; George County). Adele Mooney (Lafayette, La.; Ascension Episcopal) fought for possession of the ball before getting it to Stansberry. The midfielder took a touch and then laced it into the left side of the net for the 1-0 lead.

The Wildcats were able to keep the Warriors from getting on the board over the last 11 minutes of the night to seal the victory.

Pearl River returns to the pitch Saturday at Southwest. The match is set to get started at 5 p.m. and will be livestreamed at Go.SMCCBears.TV.