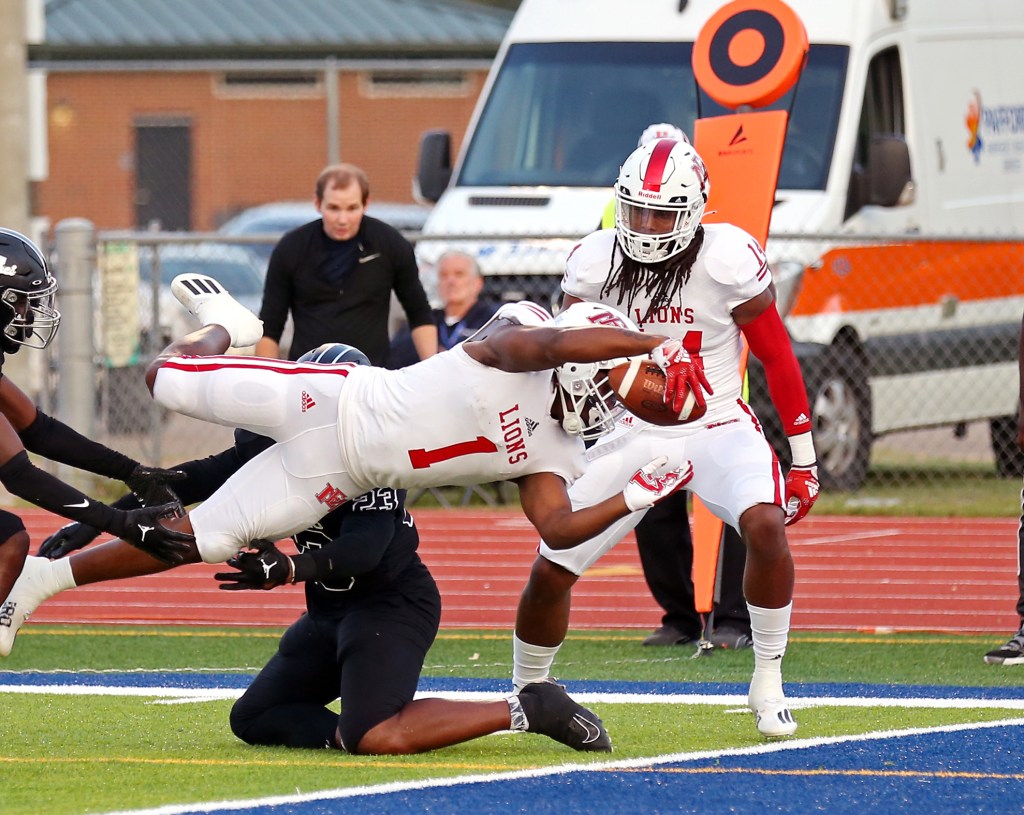 After being out-gained on the ground, 220-90, during last week’s loss at now-No. 6 Jones, EMCC established its rushing attack early and often against Holmes. After gaining 35 yards via the ground in their opening possession before fumbling in the red zone, the Lions marched 88 yards on 14 plays in their next series to score their initial first-half offensive touchdown of the year on Eli Anderson’s 7-yard scoring pass to Kadarius Calloway at the 5:27 mark of the opening quarter.

While the Bulldogs were being held to three straight three-and-outs early in the contest, EMCC took control with three touchdowns during the second quarter. The first score of the period came on Ethan Conner’s 3-yard TD run at the 12:38 mark that was set up by Anderson’s 29-yard pass completion to Carl Robinson.

In their next possession, the Lions ventured on another 14-play drive that covered 66 yards and was capped by Anderson finding Robinson cutting across the middle of the field for a 16-yard scoring play. Cole Arthur’s successful point-after-touchdown try increased EMCC’s lead to 21-0 with 5:46 remaining in the opening half of play.

Holmes answered with its only trip to the end zone on the night when quarterback Philip Short connected with Jarvis Rush on a 40-yard touchdown reception at the 3:35 mark to get the Bulldogs on the board.

The Lions responded on their next drive with Amariyon Howard’s 16-yard run and Conner’s leaping 25-yard catch setting up a 20-yard touchdown pass from Anderson to Marc Britt II. The scoring fade route to the left corner of the end zone marked the Ole Miss transfer’s first score of the season and increased EMCC’s lead to 28-7 with 1:09 left in the half.

The Bulldogs made a valiant attempt over the final minute to potentially cut EMCC’s lead in half by the break, but a completed pass as the halftime horn sounded was ruled out of bounds in the back of the end zone.

Following intermission, an eventful but low-scoring third quarter of play featured interceptions by both teams, a missed 38-yard field goal attempt by EMCC, a forced fumble and recovery by the Lions, and a blocked punt that resulted in a safety for the Bulldogs at the 4:31 mark.

With Holmes attempting to play catch-up by primarily staying with its passing game, the Lions dominated the fourth quarter with three more scores to nail down their convincing division-opening victory. EMCC’s defensive unit set up the first two scores of the quarter by initially sacking Short and recovering the fumble at the Holmes 7-yard line. Arthur’s 27-yard field goal made it a 31-9 contest early in the quarter.

EMCC’s defense again came through in a big way on the Bulldogs’ subsequent 11-play drive when Jamori Evans intercepted Short’s fourth-and-goal pass attempt at the goal line and returned it 63 yards. Aided by a 21-yard pass play from Anderson to Duke Miller, the Lions’ six-play, 37-yard scoring drive was capped by Anderson and Robinson combining for their second touchdown of the game. The 18-yarder through the air increased EMCC’s advantage to 38-9 midway through the quarter.

The final scoring drive of the evening was engineered by Memphis transfer quarterback Peter Parrish, who completed 3-of-4 passes on the drive and found Darrius Triplett for a 28-yard touchdown reception at the 1:06 mark to help solidify the 36-point final margin.

Statistically for the game, East Mississippi out-rushed Holmes, 178-27, to put together a 523-378 advantage in total offense yardage. The Lions’ leading ground gainer on the night was Starkville’s Howard with 73 rushing yards in 14 attempts.

In making his first collegiate start out of Neshoba Central High School, EMCC’s Anderson completed 33-of-42 passes for 300 yards and four touchdowns through the air. The Lions had 13 different receivers make at least one catch in the contest. Carl Robinson and Miller led the way with six grabs apiece for 76 and 68 receiving yards, respectively, for the winners.

Coach Buddy Stephens’ 2-1 EMCC Lions will play their third consecutive game away from home by traveling to Perkinston on Thursday (Sept. 22) to take on the Bulldogs of Mississippi Gulf Coast. Scheduled as the NJCAA Game of the Week on ESPN+, the EMCC-MGCCC kickoff is slated for 7 p.m. at A.L. May Memorial Stadium.