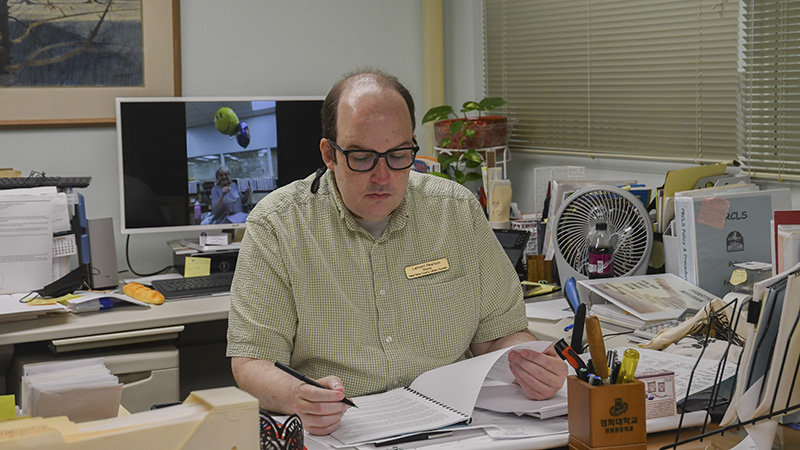 Lamont Pearson has been named the new director of the Pearl River County Library System. Photo by David Thornton Jr.

Pearson is a Picayune native and 1985 Picayune Memorial High School graduate. He was appointed Pearl River County Library System Director on Sept. 2, 2022.  Three days in, Pearson said emersion is a good word to describe his first few days as he’s been helped by his staff in getting up to speed.

“I feel like my duty right now is to be a sponge, take in as much  as possible,” said Pearson.

In the past Pearson worked as the library clerk from 2007 to 2011. During that time he said he was inspired by a former director during those years, Linda Tufaro, staff members and members of Mississippi Library Commission to get a degree in library sciences. Pearson used to be an English teacher for over a decade at the University of Alabama in Birmingham, Sanford University, two years at Pearl River Community College and two years at a South Korean University.

As the director of the Pearl River County Library System, Pearson’s job is to oversee the Picayune and Poplarville libraries, organize their budgets, conduct and follow strategic planning and look into the library system’s direction to ensure it meets the needs of the public.

Pearson hasn’t set goals for the library yet but aims to bring the local facilities to the 21st-century.

”Those members of the public that don’t use the libraries that often may not have a more accurate depiction of what the libraries offer, for example we are not a depository of old and smelly books,” said Pearson.

A digital service is also something Person wants to explore. With the help of the Mississippi Library Commission, services like Hoopla will provide audiobooks and E-books via the library. Pearson would like to partner with them and other library systems to gather more resources.

Pearson will like to apply for grants to keep the books updated on the shelves. The Library Services and Technology Act offers numerous grants for which the library can apply.

When asked what catalog he’d like to add in the libraries, Pearson said manga has been in high demand. He also wants to keep current legal and medical information in the shelves.

“Those two get outdated the fastest and you don’t want to leave those on the shelves or have information that can negatively affect someone’s health,” he said.

With COVID-19 on a decline, Pearson is looking forward to the community’s needs for a library and looking into ways to meet those needs.

“It’s a very general goal, communication between the community and us as well as seeing were we can go moving forward as the world continues to rebuild,” said Pearson.