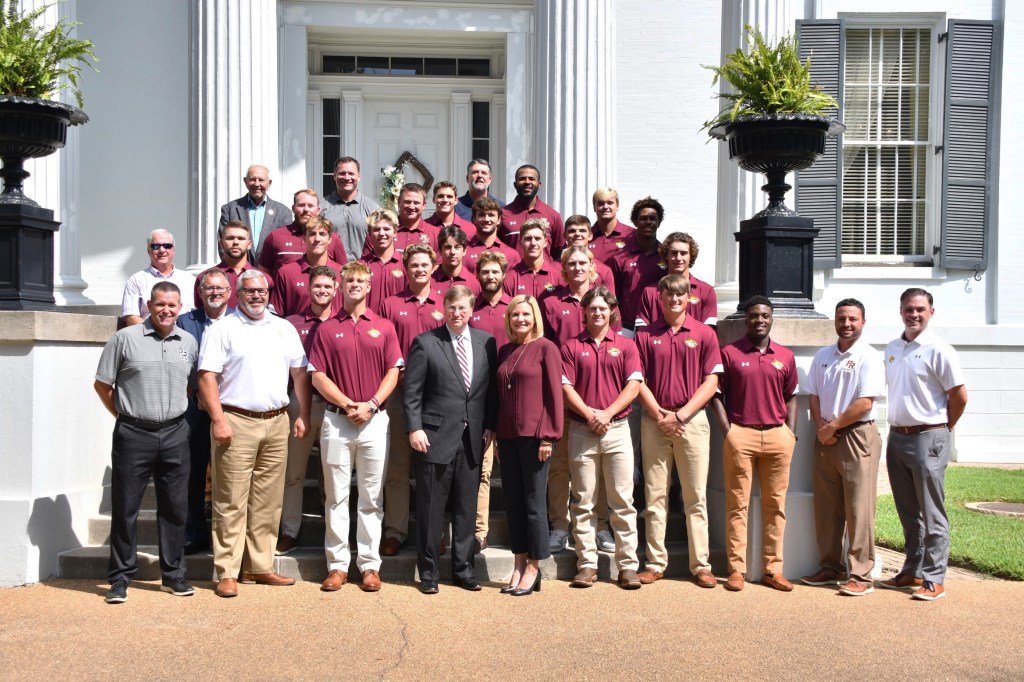 JACKSON, Miss. — The Pearl River baseball National Championship tour made its way to the State Capitol Monday as the Wildcats were graciously invited by Governor Tate Reeves and Mississippi’s First Lady Elee Reeves to visit the Governor’s Mansion in downtown Jackson.

“We were honored for Governor Tate Reeves and Mississippi’s First Lady Elee Reeves to open their home to our baseball program,” PRCC President Dr. Adam Breerwood said. “To be invited to the Governor’s mansion and be recognized for winning the National Championship will be a lifelong memory for these young men. Recognitions of this magnitude reiterate to our players that their accomplishment not only represented Pearl River Community College but the entire state of Mississippi.

“The vast majority of these players will live, work and reside in our great state for their entire lives. I know they were all humbled and grateful for the members of our State’s Legislature who were in attendance. Today will serve as motivation for our players to keep working hard and representing our college and state to the highest of standards.”

The National Champions were given the opportunity to tour the historic mansion, which is the second oldest governor’s residence in active use in the United States.

Following the grand tour, the Wildcats visited with Governor Reeves before having a meal that was provided by the Mississippi Highway Patrol cooking team.

“It was a tremendous honor for our program and college to be recognized by Governor Tate Reeves today,” Pearl River baseball coach Michael Avalon said. “Our players heard many times today ‘Thank you for representing the state of Mississippi and we are proud of you’. We are very thankful and humbled by all of this. Thank you to Governor Reeves and all in attendance for celebrating these young men and their accomplishments.”

A SEASON FOR THE AGES

After claiming the MACCC Championship — for a second consecutive year — and the Region 23 Tournament title, Pearl River capped the season with a 5-1 record in Enid, Oklahoma, to claim the program’s first National Championship. Despite falling in Game 1 of the Championship Series, PRCC rallied to out-score Madison 26-3 in the next two games to claim the 2022 NJCAA Division II National Championship in decisive fashion. With the 7-2 win in the deciding game, PRCC became just the second Mississippi program to win the NJCAA baseball national championship. The Wildcats finished the year 45-11 overall.