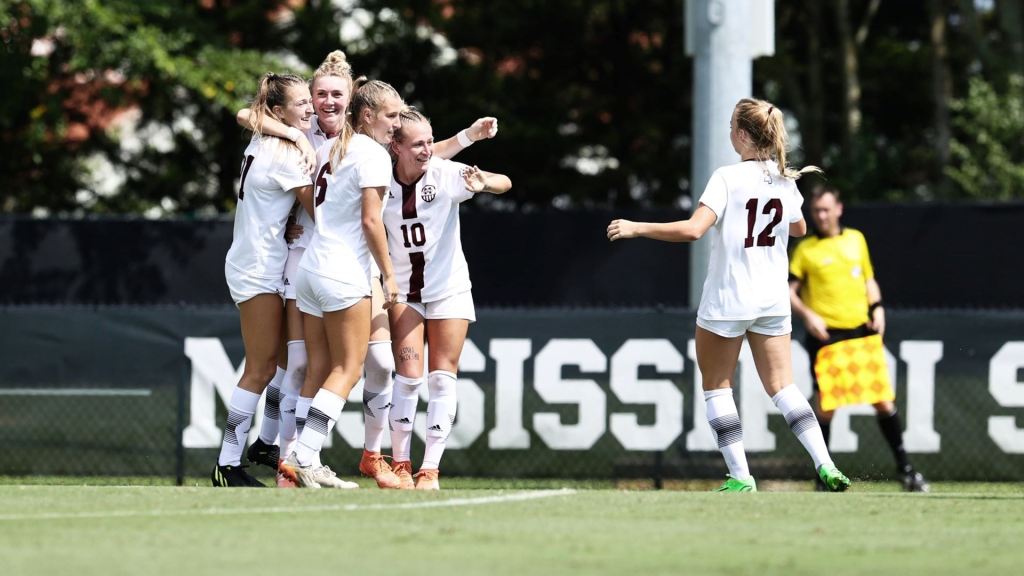 “Overall, [I’m] really proud of the girls,” head coach James Armstrong said. “[We finished] unbeaten in non-conference play, got another clean sheet and had another game with multiple goal scorers. At times, we got a little sloppy and had too much time on the ball, but overall [there] are a lot of positives that we can continue to work on this week, going into SEC play.”

Entering the match, the Bulldogs’ first goal of the game had come in the second half in three of the last four outings. On Sunday, however, State would need less than two minutes to take the 1-0 lead. In her first-career start, junior Elle McCaslin scored her first-career goal, at the 1:35 mark, off assists from Gwen Mummert and Maggie Wadsworth. The goal was the quickest scored by MSU all season.

Two minutes before the end of the first half, another Dawg would register her first collegiate goal, as junior KK Pavatt set up Juliet Moore to make it 2-0, State, headed into the break.

The Bulldogs would end the half with 22 shots and 11 corner kicks – the most recorded in a single half for State all season.

The explosive offense wouldn’t be left in the locker room, as in the second frame alone, MSU would rack up 12 additional shots, seven extra corners and two more goals.

The Bulldogs’ final stat line would read: 34 shots, 18 corner kicks, 4 goals and zero shots allowed. The 34 shots is tied for the seventh-highest in a match in program history, the 18 corners are the most for MSU in a single match and for the sixth time in program history, MSU’s backline would not allow a single shot in the match. The Bulldogs’ four goals are the most for MSU all season.

State enters SEC play unbeaten at 6-0-2, and will return to action Friday, Sept. 16, for its conference opener against the Arkansas Razorbacks (4-1-1). The sixth home match of the season for MSU will kick off at 6:30 p.m. CT.