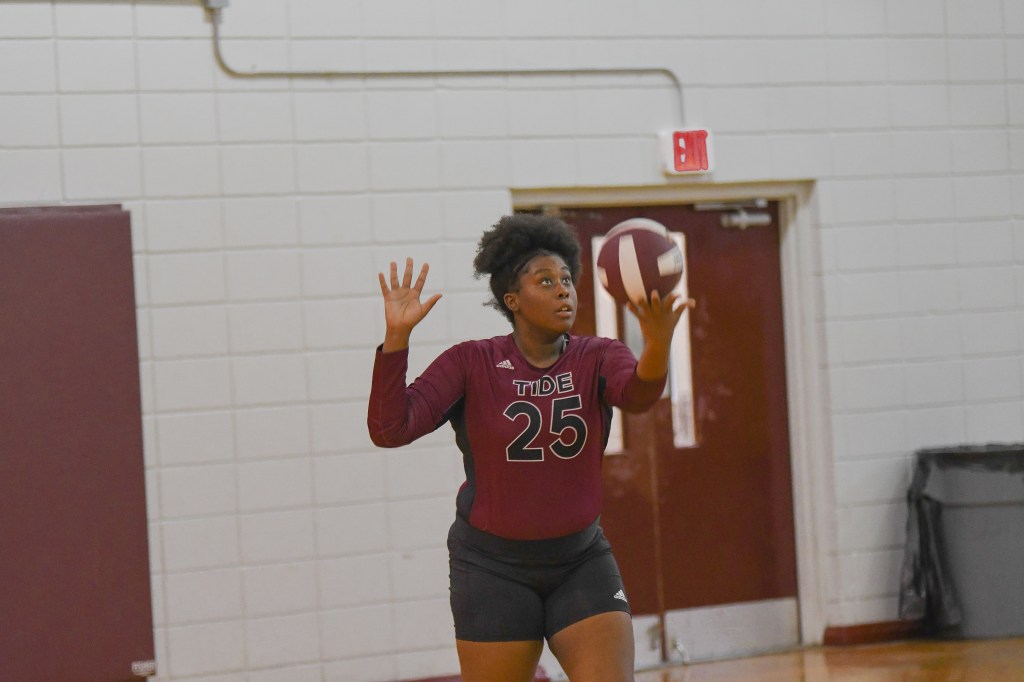 Amiyah Marks serves one of her four consecutive aces during the Picayune's win over Hattiesburg.

The Picayune Lady Maroon Tide beat the Hattiesburg Tigers in three of four sets, keeping their playoff hopes alive. Thursday’s win puts Picayune 5-13 on the season, 3-4 in district and ranked third in the district standings.

Picayune was on point offensively to start the game. They created a 9-2 lead behind Amiyah Marks’ four aces and a Reese Sorrells’ kill. Barcley Martinez tipped it over two Tigers blockers for a 15-3 lead. After a Picayune error, Annaleigh Robbins answered with a strong kill at 16-4. With the score at 21-6 Sorrells picked up an attacking block and Kaigyn Kulas assisted Brooklyn Wilson for a dinking score. Leading 23-6, both teams traded single points and then Wilson ended the set with an ace.

Martinez served an ace, and Marks and Wilson teamed up for an attacking block to lead 3-0. That turned to 6-1 when the Tigers had an error and Marks served two aces. The Tigers put up two scores then Picayune’s Kulas assisted Sorrells for a kill to put the lead at 7-3. Breauna Sparks served back-to-back aces to extend their lead 9-4. Picayune’s lead reached 14-9 then Martinez scored back-to-back kills. The Tigers began their run on scores, picking up an ace, a kill and with help from Picayune errors the Tigers tied the game at 14-14. The Tigers led for the first time 15-14 after blocking Picayune’s kill attempt. Marks took the lead back by one point after a kill and serving an ace. The Tigers scored a kill tying it again at 16-16. The set was tight all the way through 24-24. A controversial call that took away Marks’ dink as an illegal lift gave the Tigers a 25-24 lead but Marks redeemed herself by getting a kill, then Robbins ended the set with her own kill.

The Tigers had an unbelievable start to this set scoring nine unanswered points. Picayune responded with a short run. In order, the Tigers had an error, Kulas assisted Sorrells, Marks had a kill, Sorrell had an attacking block, then Martinez served an ace. This made the score 9-5. Picayune trailed the entire set but head Coach Courtney Dickens was not deterred.

“I was proud of them for not giving up,” she said.

Down 15-9 the Lady Maroon Tide’s Wilson picked up a kill, as did Marks, while Robbins served an ace then Marks scored another kill. Picayune then trailed 15-13. The scores remained tight but the Tigers won the set.

The final set was all Picayune. They created their own unbelievable start leading 10-1. In that sequence Sparks had a kill, Sorrells had a kill and a solo block. Marks served an ace and to cap off their run Kulas assisted Robbins with a kill. Picayune’s set was very dominant, they either scored off aces or perfectly placed kills. They extended their score to 20-4. Then with the score 23-7, Marks picked up a kill and had a perfectly placed dink to end the set.

This win ends a long losing streak for the Lady Maroon Tide. Throughout the season, Dickens believes her Lady Maroon Tide players struggled with putting too much pressure on themselves, which led to some inconsistent games.

“We got to be able to control our nerves. As long as we’re up I feel like we play well and then it seems like when we’re down we press too much,” said Dickens.

Dickens also said communication is a work in progress. Even though it was better on Thursday, the Lady Maroon Tide aren’t completely satisfied. Recent practices have consisted of a lot of communication drills and taking that extra time in practice in making clear communication.

“A lot of times I think they don’t really know what to say, but it’s the simple things like calling a ball. I think a ball should never hit the ground amongst a group of our players,” said Dickens. “But I was proud of them for at least trying to do the things we asked them to do.”