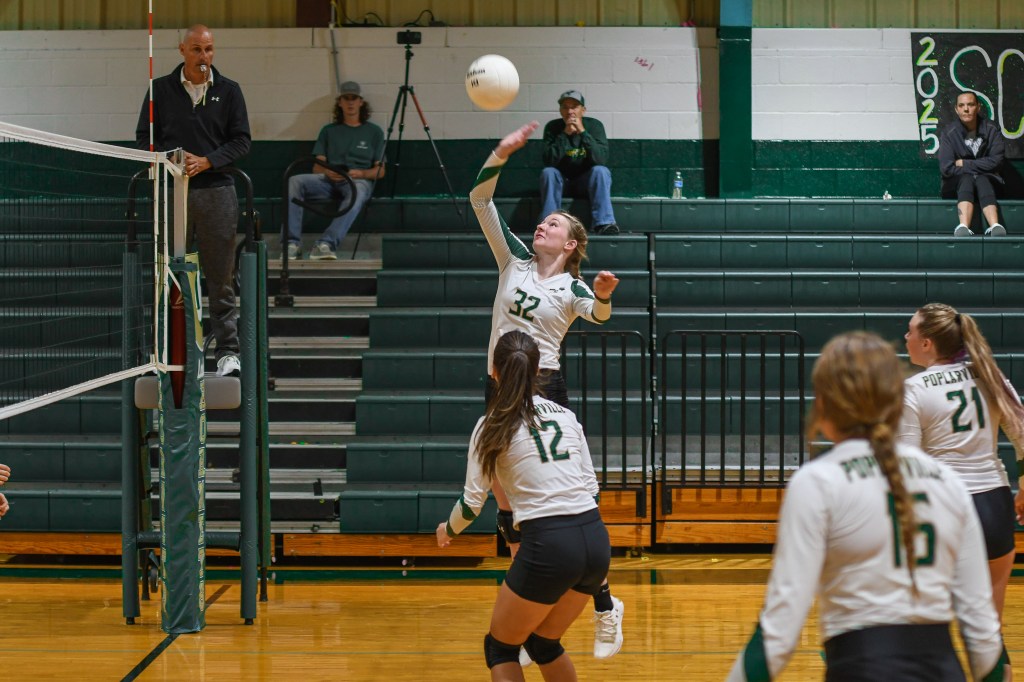 Caroline Phares jumps in the air for a Lady Hornets kill during their sweep over the Bay High Tigers on senior night.

Bolin started the first set off with an ace. Then back-to-back aces by Lendy Crider gave the Lady Hornets a 5-3 lead. From there the Lady Hornets kept the Tigers at bay, while building more on their lead. They reached a 20-13 lead behind back-to-back assisting kills from Bolin. Crider and Gracie Amacker where in the receiving ends of those kill hits. Carli McCurdy also contributed an ace and Crider contributed a dink hit. Bolin assisted Phares for a kill, Bay had a few errors then Davis ended the set with a dink hit.

Crider started off the second set with a kill but from there Bay took a 3-6 lead after a few aces and kills. Poplarville got its points off a Davis score and Tigers attacking errors. With Bay High leading by three points, Lily Tynes converted an ace, Amacker made a kill and Bay suffered an error tying the game at 8-8. Bay High reclaimed the lead by two points, making it a tight game with a max deficit of just five points. Down by two points, Poplarville executed back-to-back kills to tie the game at 17-17. Bolin assisted Crider on the first kill then Phares had the kill that tied the game.

The first score in set three was awarded to the Lady Hornets after a long rally ended with a Bay attacking error. Bay tied the game at 6-6 then took an 8-6 lead with the help of aces. With the game tied at 8-8 due to Bay’s errors, from there the Lady Hornets took a 13-9 lead. Davis made it 14-9 after her ace, and 15-9 after McCurdy assisted Amacker for a dink score. Poplarville’s lead grew to 21-16 then 23-19. Bay got to 19 points with aces. Amacker’s kill made the score 24-19. Poplarville had a three errors and Bay converted an attacking block to tighten the score 24-23. Coach Amanda Ladner called a time out to collect her group and potentially ice the Tigers’ server. After the time out, Bay served the ball out of bounds = capping the third set, stamping the Lady Hornets’ sweep.

When asked about the final time out Ladner said, she was trying to kill Bay’s momentum and refocus her players. Overall Ladner was pleased that they accomplished their goal to sweep Bay.