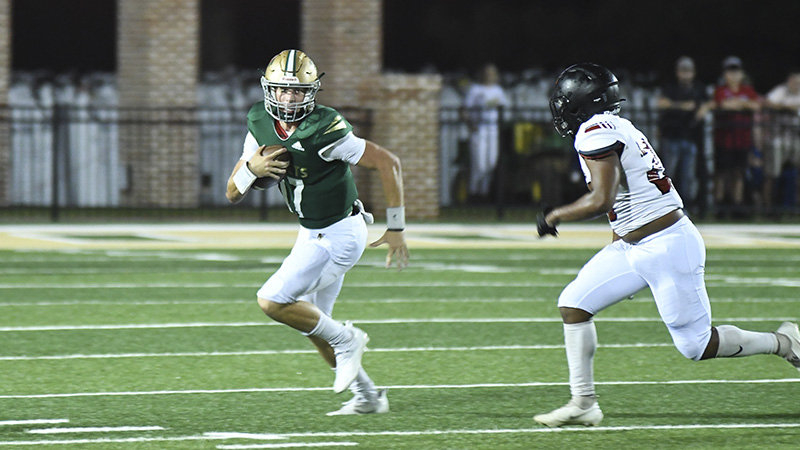 Matt Will escapes pressure and picks up a first down during Poplarville’s 48-0 win over Lumberton. Photo by David Thornton Jr.

The Poplarville Hornets showed no mercy to the Lumberton Panthers in their 48-0 win Friday night.

Poplarville started off fiery and finished until the lights literally went out. Due to the score, the game was ruled with about three minutes to play in the fourth when the stadium lights went out.

Stats wise, the Hornets put up 399 rushing yards, moved the chains 20 times and the defensive backs were everywhere. The Panthers rarely executed a play and three and outs for the visiting team came regularly. The Hornets’ defense picked up four total interceptions, two of which were returned for touchdowns.

In the first possession of the game Lumberton threw an interception caught by Nakiel Trotter. He ran it back for a 35-yard touchdown. Poplarville’s second offensive possession was easy work. They ran five plays for 52 yards for a touchdown. Maurice Travis capped the drive off with a two yard rushing touchdown, giving the Hornets a 14-0 lead with 2:30 remaining in the first.

With the Panthers on second and eight on their own 20-yard line, Jayden picked off their pass and ran it home. The Hornets then led 35-0 with 2:12 remaining in the quarter. Jarvis added a second touchdown to the score, giving the Hornets a 41-0 lead. The sequence took 5 plays covering 41 yards.

After halftime, Head Coach Jay Beach put his second unit in on offense, and they didn’t disappoint. They produced a very methodical drive, scoring in 19 plays covering 87 yards capped off by a touchdown run from Gavin Smith. That gave the Hornets a 48-0 lead in the fourth quarter with 9:30 remaining.

Before the lights had shut off resulting in the game ending early, Jayden Holden picked off the Panthers.

The Hornets’ season record is now 2-1. They will be on the road for the first time this season to play the Terry Bulldogs Friday, Sept. 16 at 7:30 p.m.