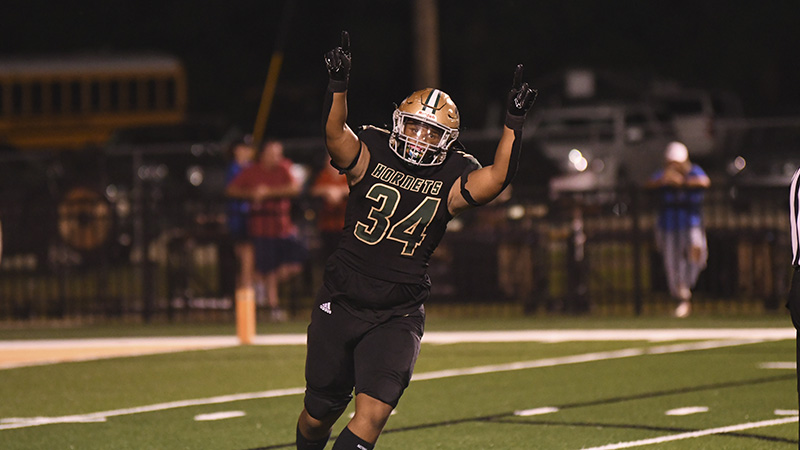 Friday’s county rivalry game against the Poplarville Hornets and the Pearl River Central Blue Devils was one sided. PRC’s only lead was at 3-0. After that Poplarville scored 45 unanswered points and clinched their first win of the season.

Maurice Travis had game high three touchdowns, two on the ground and his third in the air. PRC didn’t run well, they completed a high percentage of their passes but had nowhere to go after the catch. Also PRC quarterback Qorday Russell was under extreme pressure by Poplarville, being sacked a total of four times.

PRC’s 3-0 lead was in the last 90 seconds of the first quarter. It took them nine plays to sink in a 22-yard field goal by Brody Marshall.

Poplarville responded back in the second quarter with 10 plays covering 67 yards for a touchdown. On first and goal Maurice Travis trucked the ball in for the Hornets’ first score, giving them the lead at 7-3 after a PAT from Kyler Boothe.

In the following possession, Poplarville locked in on defense forcing a PRC three and out.

When Poplarville got the ball back they wasted no time scoring, in one play when Avan Jarvis ran it 45 yards for a Hornets’ touchdown, making the lead 14-3 with 7:45 until halftime.

PRC couldn’t produce a first down and had to settle for another three and out.

On second and seven with Poplarville having the ball on their own 38, quarterback Matt Will threw a bomb to Evan Magee. What seemed to be an easy touchdown turned into a goal line fumble when PRC defender chased him down for a tackle. PRC recovered and the momentum shifted. That shift was short lived for PRC as a three and out forced a punted of the ball to Poplarville resulting in good field position.

Poplarville had the ball on PRC’s 29-yard line and during the very first play Travis ran the ball in for at his second touchdown of the night, growing the Hornet’s lead to 21-3 with a little over two minutes to play.

Poplarville received the ball after the halftime break and it was the Hornets’ show from there on out. They started off aggressive. In four plays Will passed to Travis and he took it the distance for a Hornets’ touchdown through a 55-yard drive, putting Poplarville up 28-3 to start the third quarter.

Poplarville’s next possession was a one-play 65-yard touchdown drive brought in by Tristan Williams. The Hornets led 34-3.

After another PRC three and out, Poplarville found the end zone in four plays covering 75-yards. During this sequence Travis picked up a first down, allowing Benny Jarvis Jr. to get a big 20 plus yard run. Then, Will kept the ball on first and 10 for a quarterback-keeping touchdown. With under 4:30 to play in the third Poplarville led 42-3.

The last score for Poplarville came at the 5:40 mark in the fourth. In three plays Boothe capped off their drive with a 24-yard field goal.Poplarville took the team’s first win of the season at 45-3.